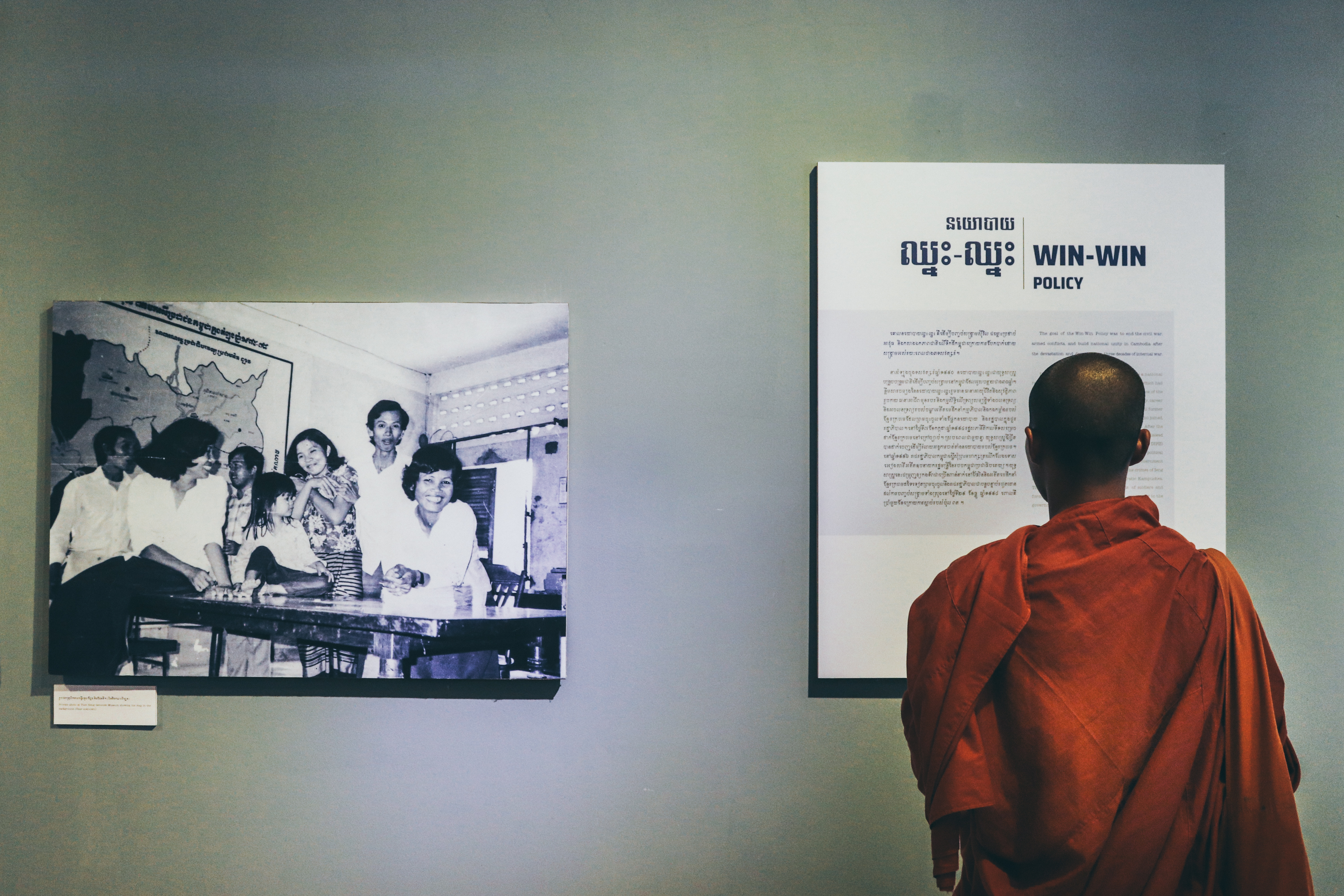 40 Years: A memorial to both victims and building a museum

In August 1979, just eight months after the Khmer Rouge regime was toppled in Phnom Penh – and the extent of their atrocities began to be uncovered by the invading soldiers – Tuol Sleng Genocide Museum opened its doors to show the world the evidence of these horrors, lest they be forgotten.

The remarkable feat of opening a museum in such a short time can be attributed to a dedicated team of Cambodians who collected and poured through photographs and well-documented records of the victims of the prison as well as articles of clothing and torture devises that were left behind. They then displayed them in the rooms of the former secondary school that had been turned into the S-21 Prison from 1976-1979.

Over the past year, the current museum staff has followed in their predecessors’ footsteps by painstakingly going through the archives, translating transcripts, documents, newspapers and magazines, which will now be photo documented for an online database. Items were also cleaned, restored and properly stored for preservation.

“There are two projects now: the archivization and the digitalisation,” explains Florian, a volunteer who helped in putting the exhibition together. “The archives, their work is for the conservation of the objects for display in the museum. In every room there are objects. Some of them were found in the museum, of course, but some of them are from the provinces. It’s very common that some staff, when they go on holidays or are in the provinces, bring back some objects that were given to them because [the donors] know that they work here.”

“The goal of the digitalization is to create a big database,” he continued. “This is going to be very important for the families of the victims because they can use more than 50 criteria to look online. So for example, if you have a province and a date of birth, you can write it on the website, and it can lead you to some documents, images, testimonies, or any documents.

The project, which was funded by Korean development agency KOICA with the support of the Ministry of Culture and Fine Arts and UNESCO, required digitisation of 495,012 documents. The endeavor has culminated in a new exhibit at the museum, “40 Years: Remembering the Victims of S-21”, which will be open until August 2020. An accompanying book, funded by the German Embassy, is on display at the exhibit and will be available for purchase in a few months.

Unlike the Tuol Sleng permanent exhibit, which showcases the prison cells, torture devices, and the many, many photos of victims, the year-long temporary exhibit follows the history surrounding the museum. It’s a welcome accompaniment as it picks up where the other leaves off; it shines a light on the positive work that has come since – and on the future.

The exhibition is divided into five parts. It starts by giving an overview of the school that was in the location before, including descriptions of teachers and first-hand accounts of students, followed next by the history behind the creation of the museum and its opening exhibition.

The 2019 exhibition recreates the museum’s first with leather couches and guest books.

Information on the museum’s original directors and team of archivists is on display next to images of the first exhibit – which included many of the items that are still on view in the museum. The curators of this exhibit even put together the room to look as it did for the original, with a leather couch and coffee table laid with guest books for visitors to sign. (A list of the nationalities of the museum’s first visitors is hung on the wall, with the vast majority from the former USSR and Vietnam.)

A photo of the rescued children as they were carried out by Vietnamese soldiers becomes particularly startling as Florian explains that, though this photo was taken just forty years ago, only one of the children is still alive.

In fact, today there are only three survivors of the S-21 prison (two had been adults during the time of rescue). “They are here everyday, and they talk about their stories. They sell some books,” says Florian.

For the opening ceremony of “40 Years”, all three survivors – Norng Chanphal, Bou Meng and Chum Mey – attended as well as Minister of Culture and Fine Arts Phoeurng Sackona and other officials. Dancers from Pka Sla Krom Angkar also gave a life performance.

Another startling discovery from this portion of the exhibit is that there were once plans drawn to build a memorial park between the east side of the museum and Monivong Boulevard. Though it never came to fruition, one can envision the serenity of a large park devoted to reflection and a tree-lined promenade when looking at the displayed blueprint.

The next section of the exhibition has information on the Khmer Rouge Tribunal trials, followed by the processes of the archivists during the last year. A photo of the hardworking museum team hangs above a copy of the “40 Years” booklet, showcasing the fruits of their labour.

The final room has a large mat on the floor in the center with relatively few things on the wall. It is a room for remembrance.

“Sometimes members of families come here to pray,” said Florian. “So we have this room dedicated to the victims.”

The exhibition is open from 8am to 5pm and located on the 2nd floor of Building B of the Tuol Sleng Genocide Museum.

Gay Rights Have Come a Long Way in Cambodia. The Language Needs to Catch Up
Phnom Penh Soccer 7’s Tournament