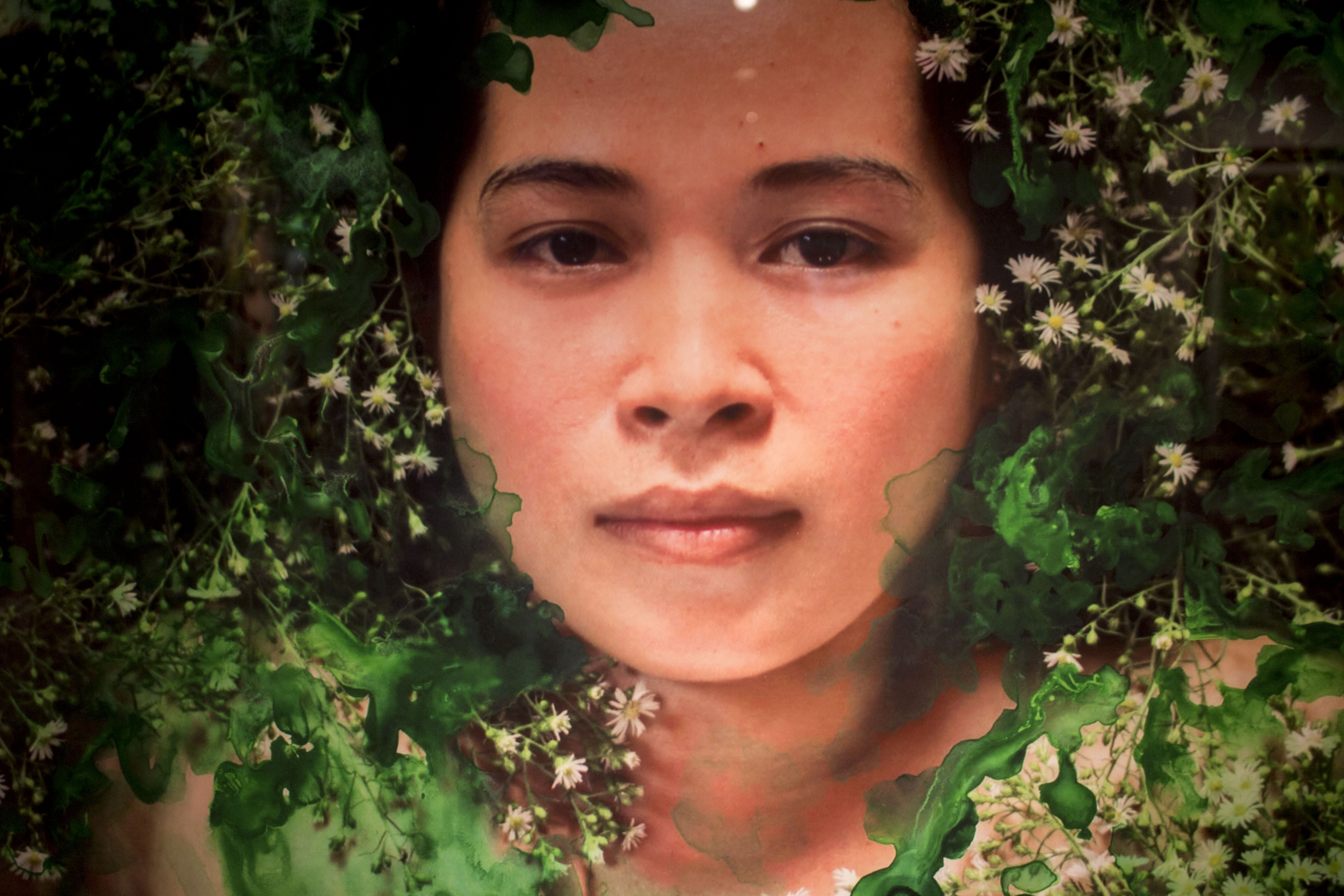 In each portrait in Neak Sophal’s Flower exhibition, a Khmer woman gazes dispassionately into the camera, appearing to float among the garlands of flowers that envelop her face and hair.

At first glance, the image seems strikingly familiar, conjuring echoes of Millais’ Ophelia – the delicate heroine in Shakespeare’s Hamlet who is driven mad by the cruelty of her fiance, after he rejects her, questions her purity, and erodes her sense of self. In Hamlet, Ophelia drowns herself with flowers and herbs chosen to symbolise her plight.

It’s no coincidence that blossoming flowers are so widely used as a symbol of femininity around the world – especially for girls on the cusp of womanhood. Everything from European poetry to the hand gestures that underpin Khmer dance equates a woman’s identity with the flower-and-fruit cycle of blossom, bloom, withering and decay.

The metaphor reinforces the notion that women, like flowers, should be both beautiful and passive, attracting attention in to be picked, or fertilized. Flowers are simultaneously decorative and serve a sexual function – but they lack agency of their own. If like Ophelia, they are ignored or trampled, their existence becomes valueless. They disintegrate and die.

But Neak Sophal’s subjects are no Ophelias. Her images play with the connection between femininity, fragility, and flowers – and resist it.

Each image teases out a slightly different nuance in the relationship between the woman and the blossoms that surround her. At times, they seem to choke and clutch at her, dragging her into the darkness behind.

In the first image in the series, the woman’s garlands are not flowers at all, but broccoli and cauliflower arranged like flowers, subtly challenging rigid conceptions of what counts as beautiful, and feminine.

In another, blood-red flowers snake across a woman’s neck and chest, seeping stains into the white sheet she is wrapped in – the red, white and black mixing together Khmer wedding and funeral colours in an ambiguous blend of bloom, purity, and death. It’s a vivid reference to the Khmer proverb “Men are like gold, women are like white cloth”: the idea that men retain their value and can always be washed clean, while women are stained forever, becoming worthless.

But no matter how the flowers are arranged to frame and conceptualise her identity. in every portrait, the subject is defiant. She locks the camera with her eyes, tacitly asserting agency and pride, even as the tendrils creep over her skin.

The weight of this symbolism, of cultural expectation, may overwhelm or constrain me, each image seems to say, but it will not destroy who I am.

Unlike Ophelia, I will not drown.

THE WEEKEND IS HERE! So here’s how to spend it in Phnom Penh…
Where to Watch the King’s Birthday Fireworks