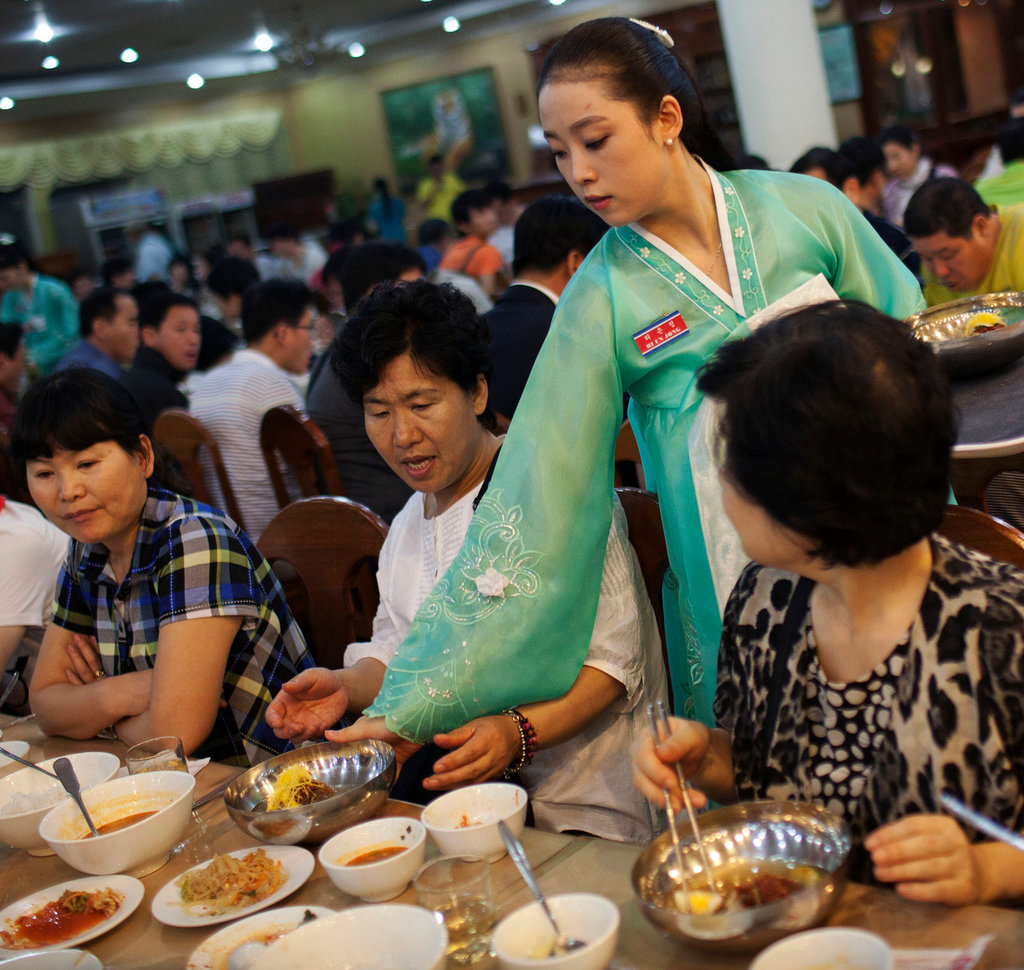 North Korea has recently been grabbing headlines of various media outlets around the globe – but our focus isn’t on politics, it’s on the wondrous charms hidden all over Phnom Penh. One such vibrant location, often overlooked by unaware travellers rushing through the city, is the restaurant Pyongyang.

This state-owned North Korean restaurant is part of a global chain of venues, and with our team unlikely to dine in NK any time soon, we relished the chance to experience both culinary culture and accompanying entertainment.

How to travel to North Korea… (ish)

Nestled on the busy Monivong Boulevard – a fairly understated site at number 400, marked with a large billboard above the eatery – this all-singing, all-dancing, phNom phNom phNom experience awaits. Booking is recommended and the entertainment usually begins at 7.30pm, so a prompt arrival at 7pm is desirable.

We phoned the English phone number* during the afternoon and were greeted with 60 seconds of recorded Korean singing and quirky music before the line automatically disconnected; without a reservation, we chanced it and arrived at 6.30pm and were sat at the side of the large restaurant.  Sure enough, come 7pm, almost every single seat in the house was full.

Arriving early allowed us to peruse through the very extensive menu. We noted that dog was included in multiple dishes and steered well clear due to our overwhelming adoration for cute puppies. So chicken and beef it was. Ordering kimchi ($3), seafood fried rice ($5), chilli fried chicken ($8) and hot spicy beef soup ($10) – we instantly realised we had dramatically over ordered for two people sharing. There was a complementary mixed plate of cucumbers sprinkled with fresh chilli, cooked peanuts, rice and some form of delicious sour cold noodle.

Drinks weren’t listed on the menu, but super capitalist coca-colas were $1, and most tables were indulging in Saki. Ankor and Tiger were being dished out, and eventually ran out completely.

The chilli fried chicken and seafood fried enough would have been more than enough for us to have shared – and both were delicious. The beef soup wasn’t to our taste, perhaps we had been too saddened by the dog options and became suspicious of how unfamiliar the super soft beef was – but each to their own!

(We didn’t want to break the no photos rule, so we’ve borrowed this photo from The Phnom Penh Post – rulebreakers, scallywags, pioneers.)

On with the show!

As a dozen North Korean waitresses expertly handled a packed restaurant, with contained urgency yet stylish élan, we quickly realised there was far more impressive feats to come.

We would absolutely suggest experiencing it for yourselves, but a handful of spoilers would include the lightening quick multiple costume changes, the K-pop styled singalongs, virtuoso-esque accordion performances and heavy metal drum solos.

The waitresses give out bouquets of flowers at the beginning of the evening, and the tradition is to present them back to the performers as a sign of appreciation.

Oh. And it’s strictly no photos.

The staff tirelessly rushed round putting their hands in front of mobile phone’s trying to sneak a snapchat video. We decided to be respectful and not break the rules – so instead we’ve included photos and credited the Phnom Penh Post.

Although, if you’re presenting a waitress with flowers, they seemed more tolerant and agreeable to pose for a photo with you mid-performance.

Frazer Vs Burger: Dos Besos Mexicali Burger
Top Things to Do in Phnom Penh THIS Weekend