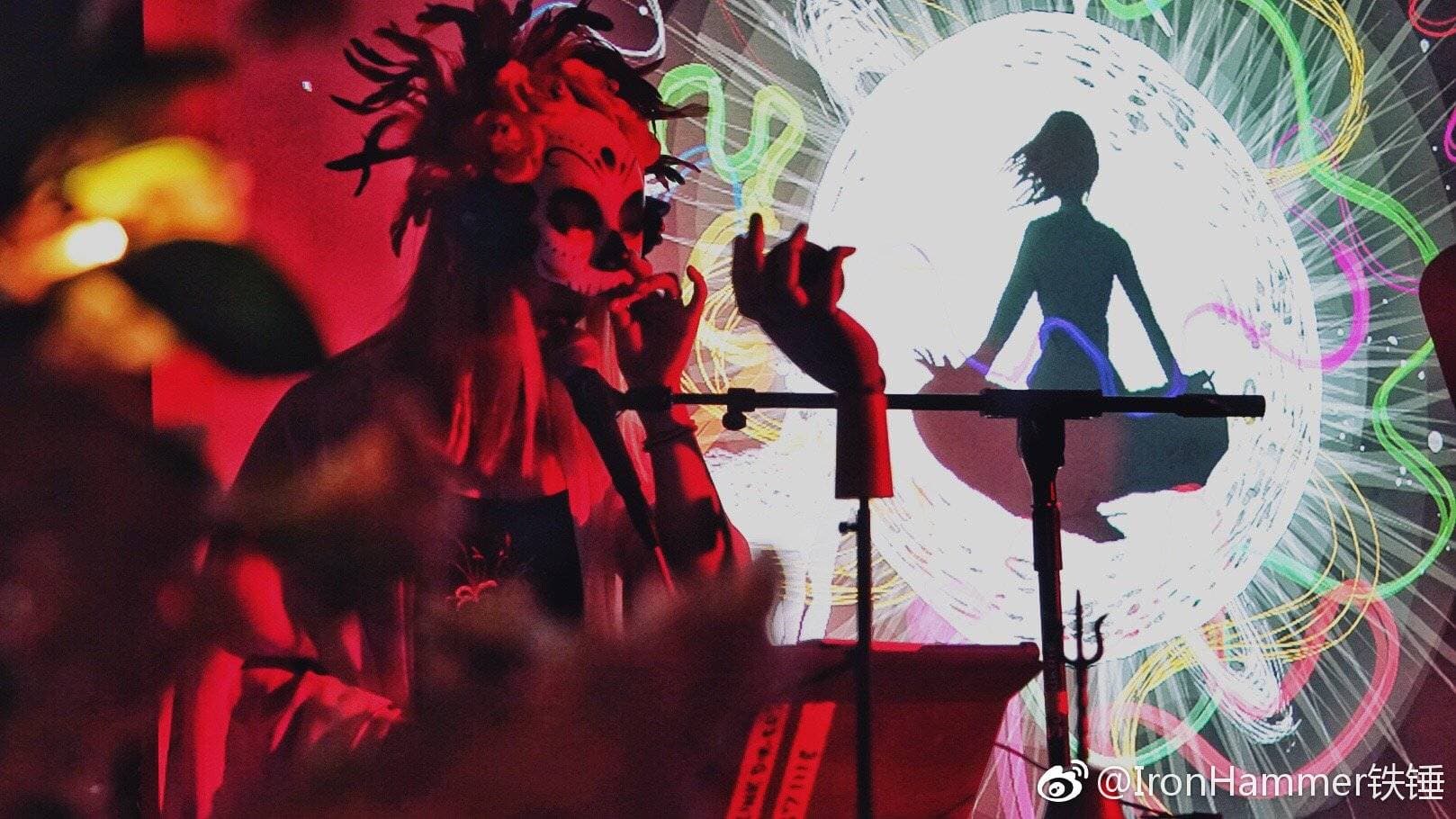 Blending electronic live sounds, interactive theatre performances and live animations, UK-born Dann Gaymer and Nan Guazi from China have wowed crowds from Berlin to Shanghai with their ethereal performances that refused to be pinned down.

Now, the two-piece art-rock performance band stops in Cambodia for a string of shows to launch Charon, their new EP and the first music release from the anti-pop brand Daftpop.

We caught up with Dann after the band’s first two nights in Kampot to find out more about Guiguisuisui’s show at Cloud this Friday.

Your performance work and shows seem to be very contextual to the venue that you’re performing in. What can audiences expect from the show at Cloud on Friday?

Context is everything, not just in music and art but also in life. The vibe of a venue, audience, and the city they exist within all have an influence on our performance: the paintings that emerge on the screen, the way we sing and play, the way we portray our different characters.

In short audiences can expect a journey to another planet, constantly shifting and drawing them in, and different to any performance we’ve given before as this is our first in Phnom Penh.

Your partner, Nan Guazi previously talked about how she focusses on reaching out to your audiences to form that creative and artistic connection to audiences where it is not always encouraged. Tell us a bit more about that.

Chinese audiences can be a bit shy and when people go to see performances they usually expect there to be a pretty strong invisible boundary between the audiences and performers. Of course there are exceptions to this, in the heavy metal and punk scenes for example, but you have to bear in mind that only includes a very small demographic of Chinese people.

There’s also a boundary between people in day to day life, due to the pressures of life in overcrowded cities people retreat into fantasy worlds on their smartphones. Where they are constantly connected, but at the same time disconnected from reality.

So it’s quite ironic in a sense that we use a highly fantastical type of performance to reach out and grab people, to make a connection with them.

Where do some of the inspirations of your artistic landscapes, soundscapes and characters stem from?

I can only say our respective journeys through life: I studied Anthropology and Ethnomusicology, I have an interest in Daoism and Zen Buddhism, and I’ve spent a decade travelling in Asia, over half of that performing, so the sounds and ambience of so many places and artists along the roots.

There are also some nods to my skateboarding roots in the UK and there’s some Misfits horror punk buried in there somewhere. Even deeper some British blues influence from my dad, who is still my favourite vocalist.

For Nan Gauzi, she grew up in Guilin in China’s Guangxi province, around the beautiful mountains, valleys, and rivers. She was influenced by Chinese folk art and mythology from a very young age, and her mother was a professional musician who played the pipa and guzheng.

That area of China has a lot of ethnic minorities with language, art, and musical styles quite unique from Han Chinese. So in her vocals, artwork, and costume design you are seeing a lot of odes to her homeland but in a very spiritual sense.

What kind of stories do you want to tell to your audiences?

That the cycle of life, death, and rebirth are eternal; that you cannot have light without the darkness, and that darkness is not something to shy away from. There are more explicit storylines in there but we think it’s pretty boring to spoon feed art to people, so we leave it up to audiences to figure out the story for themselves.

Tell us about your new EP, Charon.

The EP blends minimal wave synths, trip hop beats, and shoe gaze guitars with samples of traditional Chinese instruments such as the pipa and guzheng, and whispered poetry juxtaposed against Chinese opera vocalisations, all mixing together to create an art rock crossover between East and West, the traditional and the contemporary.

Each of the tracks can stand alone or fit together to tell a story with lyrics that reflect upon Chinese mythology relating to the red spider lily, which are described in translations of ancient texts as flowers that grow in hell and guide the souls of the dead along the path to reincarnation. The title borrows the moniker of the ferryman of hades, who serves a similar purpose in Greek mythology in helping lost souls journey through the afterlife

In what ways has your art evolved since the two of you began in 2012? How do you see it evolving moving forward?

Since 2012 when it was a solo blues punk band that crossed over with multiple collaborations, the band has gone through light years of changes. In the early days it was a lot of raw energy, so over the years it’s been a process of channeling that energy in different ways, and also not always blasting at 100%.

It’s certainly became a lot more melodic and visually appealing, but the way we create and tour is still coming from a very DIY punk place, and currently it’s more fun than ever as we include so many variables that we don’t know what will happen each night.

Guiguisuisui Charon Tour 2019 plays at 8pm on Friday 1stFebruary at Cloud, St 9, Tonle Bassac, before heading to Metal Your Day Store in Siem Reap on Saturday.

The Search Is Over: Phnom Penh Now Has Its Own Top End Gin
Ream Dreams: A Farewell to Monkey Maya