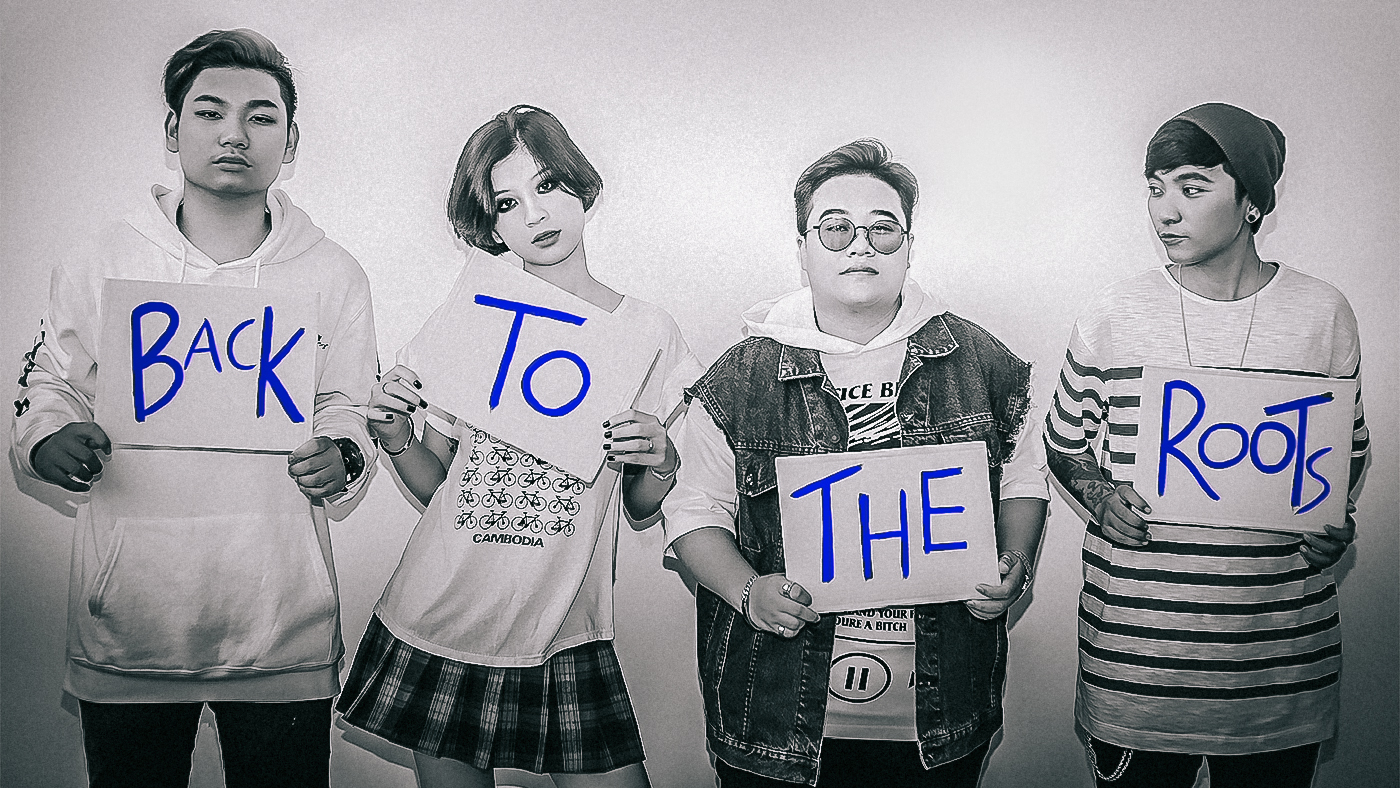 SamRocker, Phnom Penh’s own alternative metal/punk band that sings in both Khmer and English, releases its third album this Saturday at Cloud. Sam, Houy, Nisai and Tomi sat down with What’s On Phnom Penh last week at the Tonlé Bassac-area bar/venue to share what it’s like to be in a band together (spoiler: lots of practice and fried chicken) and why they’re so stoked for the release of their new album, “Back to the Roots”.

WOPP: SamRocker is named after you, Sam, but that’s because you were performing solo originally. When did you guys end up forming a band?

SR: We’ve been performing together for a few years already, but it was just me at first. And then we had the same goal, the same vision and also the same taste of music. Then we thought that we can do more, so let’s form a band.

Of course, I’m the one who formed the band, and there was some in and out. We’ve been testing and we’ve been working with a lot of people already. And some had the same goals and we stick together until now and a few didn’t have the same vision as we do. So it’s about one group for one vision. One goal. Yeah, this is the final.

WOPP: For how long has it been the four of you?

WOPP: And this is your third album. For how long have you been working on this album?

WOPP: Haha. Alright! So you guys were like, “We got the band. Let’s do this!”

SR: Yeah, let’s do this! It’s like, I was in a band before. I had a post-hardcore band. I’ve always been a fan of metal music, heavy music, punk, stuff like that. And then I experienced, myself, the pop ballads. You know, with people, the feeling changes sometimes. Yeah, but it’s not like now. It seems like, let’s go back to the roots.

SR: Yeah, pop rock and ballads. But now this new album is getting heavier, with songs that you can jump to and head bang, just spill all your anger. And sometimes some of the songs are inspirational, to motivate you to follow your dreams. Few of them, like, just bust out all the anger!

WOPP: What do each of you prefer playing: hard or pop rock?

WOPP: Good thing you’re bringing it back. There are people who have been following the band for the first two albums. Do you think that they’re going to be surprised by the switch in the third?

SR: Yeah, yeah, I’m sure. Yeah, they’ll be surprised because we’re bringing a new sound to the mainstream industry. We released the song recently, two months ago, “No More” with one of the top rappers in Cambodia, Vann Da. He’s so good and talented, and he’s a cool guy. So we’re happy to work with him and in result, we get to get a lot of support.

And it is the metal song with rapping so it’s new to them. We bring metal music into mainstream industry which is so new to Cambodia. Yeah, you know, like underground people, we know and we enjoy heavy metal music, but mainstream industry – most of the people they don’t really understand. But when we brought this song to them [snaps] they like it! And we have a lot of positive feedback.

WOPP: So you released that in two months ago and then you have another song that you’ve released, “Smile”, which is not hard.

SR: Yeah, it’s a kind of uplifting, inspirational song because we want people to listen and feel happy and feel inspired to do something that you want.

WOPP: Because those lyrics are in Khmer, could you share a little of what it says for English language listeners?

So it’s like the song tells you that don’t be afraid. Nobody ever succeeds without failure. So just, let’s go and do it. And keep smiling. Keep believing. Let’s smile and head up to the future. Follow your dreams and you will get it. That’s why the song’s called “Smile”. I want to use it for the word “hope”. When you keep smiling, you keep your hope up. Just no matter what happens.

Yes, you fall. You get back up when you fall.

WOPP: What other bands serve as your inspiration?

SR: Bring Me the Horizon, Slipknot, One OK Rock, Linkin Park and also Asking Alexandria. I’ve been loving them for a long time. So you can see that we get inspired by them in everything – the sound, the music, the way they play, their performance. Just wow.

WOPP: So what are we looking forward to in the future?

SR: We have the album coming out, and then we plan to do another music video. And we also planned to do another release performance in Siem Reap in December. So we want to bring the music there, and let’s see how people react to the new sound!

Yeah, and also at the same time that we’re releasing the third album, we already wrote some for the next one.

WOPP: Wow, that’s a lot! Anything else?

SR: Yeah. You will see a surprise when you come to the show on the second of November at Cloud.