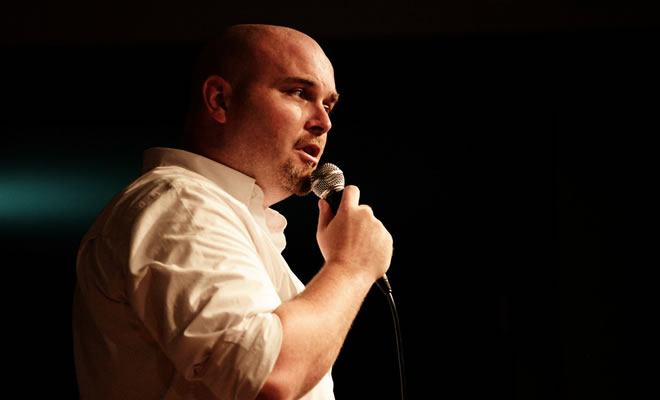 After a packed performance at the DPA in November, Canadian comedian Brian Aylward is back in the Penh for a soon-to-be-sold-out show… with a trip down the Mekong thrown into the mix.

He’ll be headlining Comedy in Cambodia / The Riel Brewing Company’s second-ever boat party, which combines a sunset cruise with top comedy, washed down with some excellent, locally brewed craft beers.

Who is Brian Aylward?

Bangkok-based Brian started his comedy career in South Korea in 2005, when he got up on stage for a bet.

Having got hooked on the first hit, he went on to perform hundreds of shows across Asia and set up a bunch of comedy events of his own, including Stand Up Seoul and the Mad About Comedy series in Thailand.

He’s twice reached the finals of SiriusXM Radio’s “Canada’s Next Top Comic”, was voted Best Standup Comic at the Canadian Comedy Awards in 2016, and was nominated in the Best Comedy category at 2017 Fringe World in Perth, Australia.

At his last Cambodian show, he tickled audiences with a set revolving around four anecdotes – one from each of his previous visits to the Kingdom.

Tickets cost $15, and considering that this includes a trip on the boat and THREE Riel craft beers, that sounds like a steal.

If you want to get a ticket, you’ll have to move fast. The organisers say they are already running low, but you can still get your hands on one by swinging by 3Mangoes tonight (Friday) to get 20% off, or take your chances on no-shows at the door (plank?) on Saturday.

Brian Aylward / Comedy in Cambodia Boat Party, 4.30pm, Sisowath Quay; $15. The boat leaves from opposite True Face nightclub, on the corner of St 90. Look out for the Riel Beer banner.