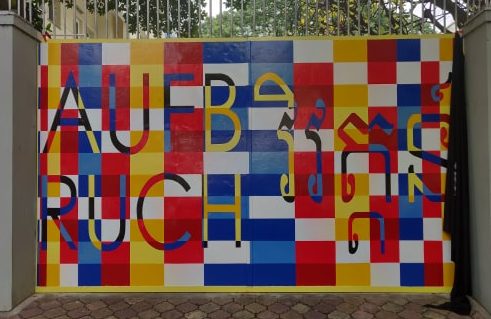 Bright gates open as reminder of a fallen wall and independence

Thirty years ago, the divided city of Berlin became reunited. November 9, 1989 marked the end of the Berlin wall splitting the population. As the Cambodian media settled in at the German Embassy this morning, Benjamin Knoedler (Deputy Head of Mission) gave a brief yet informative overview of the wall’s history – of the significance of November 9 to Germany, as well as it being Cambodia’s own celebration of independence (proclaimed November 9, 1953).

To celebrate the anniversary, the embassy commissioned Danilo Halle and local Cambodian artist Hour Soben to paint their gates. The artwork collaboration emphasises friendship between Germany and Cambodia and serves as a reminder that creating walls and barriers is not the solution to some of the world’s most pressing challenges. The piece represents cooperation, mirroring the shared ideals of creating a better future for the people of both nations.

“It’s always nicer to paint walls than leave them unpainted”, remarked Halle, “It’s not only art, but can also be used as a city developing tool”. The young artist believes that art in public places can have a powerful impact on the community, enriching the mental well-being and positivity of those that enjoy transformed spaces. After the German Ambassador and Cambodian Deputy Prime Minister unveiled the transformed gate, the gates opened and they walked through together as a symbolic gesture.

Each gate has 9 columns and 11 rows, signifying the important date. “Today is not about politics. Today is about friendship, the shared desire for unity, for peace, and democracy”, added Benjamin Knoedler, highlighting the artistic creation and imploring the press to enjoy this celebratory collaboration.

The gate can be viewed at the German Embassy, Street 214, Rue Yougoslavie

A Private Hotel Floating on The Mekong
Verse in Prose: November “Experiments”