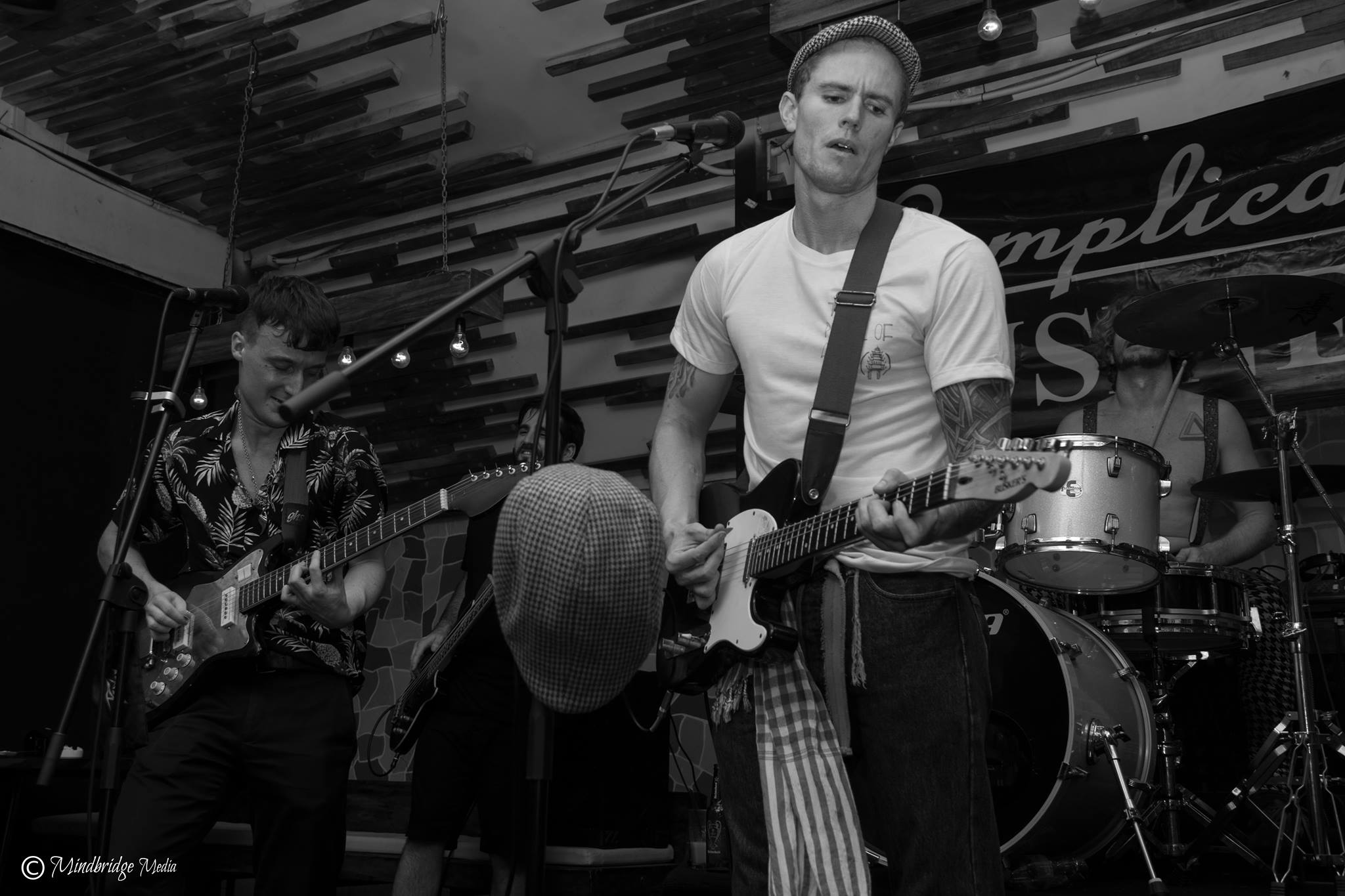 Actor and filmmaker Maryam Zaree knew little about her early childhood and got little information about it by way of her mother. Then she found out that the reason that her father hadn’t been around during her upbringing was that he’d been held in an Iranian political prison – and that she had been born in that prison. Deciding to uncover more about her personal history for the film Born in Evin, she discovers that it’s actually a shared history, with many other families having had the same fate, and that there’s power in sharing.

Get ready to dance like it’s the swinging hayday of Sinn Sisamouth and Ros Sereysothea! Khmer Old School Band, with musicians from the Cambodia Music Association for the Disabled, will be playing classic Khmer rock ‘n’ roll. Food specials for this special night include marinated pork and vegetable skewers and BBQ corn, with a homemade pepper sauce.

Khmer Magic Music Bus is making a pitstop (hardee har, I know) at Bouchon. The five-piece band will be playing an evening of classic Khmer tunes.

Two acts are taking the stage at Box Office. Ronan Sheehan (of the Goldilocks Zone) is kicking off the night with his acoustic guitar solo set. Then comes Little Thieves, the trio made of David Bell, Gary Custance and Lewis McTie, who will play the hits, old and new.

The FlipFlops describe themselves as a “wayyy chilled, laid back kind of acoustic” group. The trio plays reggae and pop tunes. I mean, you kinda get that with the name, right?

Two divas take the stage to battle out jazz versus soul, much to the audience’s delight. Leading tonight’s episode of Jazz and the City are songstresses Mirasol and Intan, backed up by musicians Euan and James.

For a healthy dose of Western European vibes, head to Petanque Bar to see a live set by Hugo. He plays everything from English rock and pop to famous French variety to traditional Corsican music.

Gonzalo Rodino is a man with a beautiful voice and a guitar, gearing up for a live show of blues and country music  at LF Social Club’s outdoors garden.

No Problem Disco, composed of DJs Jack Malipan and Sound Advice, are doing another music takeover at Sundown Social Club for those magical hours when the sun’s downfall leads to glorious colours and a shimmering night. Harvest Craft Beer is getting in on the action, giving out free pale ales from 5–6pm.

Definition of an Afrobash: a sweaty dance party grooving to bashment, Afrobeats, South African house, Kuduro spun by DJ Soma Vibez. How it is used: Tonight there is an Afrobash at Ege Bar.

For Americans (and those who love them), Democrats Abroad in Cambodia is throwing a happy hour at Botanico to help register voters and request absentee ballots ahead of the deadline on October 4. And there’ll be Biden mugs there for purchase, too, if you’re so inclined (which, if you watched the debate this week, we’ll assume that you’re so inclined).

Tacos Kokopelli is holding its last Thrifty Friday, the weekly tradition that features 50 cent beers. For tonight’s edition, they’ll be streaming Pendulum live from Spitbank Fort in the middle of the English channel and then open up the video jukebox to the floor.

Famed vintage pop-up shop History of Things to Come is popping up the entire weekend with a new shipment of clothing for men and women.

The Flicks is doing a one-night only showing of the instant movie classic The English Patient. Winning best picture of the year (plus eight other Academy Awards), it tells the story of a past love affair of a man who’s now engulfed in a new phase of life as a WWII fighter pilot recovering from a near fatal plane accident with the help – and love – of another woman.

Bar Hometown Hangout, food purveyor Fat Passion and boat company Crocodile River Cruise are joining together to launch (pun intended) a party boat tonight! The Intan Andriana Quartet will perform swing jazz, followed by DJ Moto on the decks. After party for ticket holders. The $10 ticket includes food and drink while on board.

What do you get when you mix “Havana music DNA” with Slovenian “superlative guitar”? Duo Son Cubano. And Son Cubano is the genesis of salsa, rumba, bolero, cha cha and balada.

Alchemy is celebrating the launch of a newly formed all-star ensemble while also honouring their departing Event Manager Kenny. Six-piece Maki Orkestr plays “timeless songs of the Roma people from various regions including the Balkans, Russia, Romania, Serbia” as well as the Mediterranean, Middle East and Latin America.

Boxchords and Cloud have teamed up to put on an all-out eighties bash. The Boxchords, an acoustic trio that makes surprising covers of well-known hits, will perform all 80’s tunes, followed by 80’s karaoke. The bar is loading up its classic game consoles for some classic 80’s retrogaming, too. The best 80’s outfit will get a free drink!

The Two Jacks, the “ultra tight pairing” of Joe Wrigley (guitar/vocals) and Greg Beshers (bass/guitar/vocals), is playing the first farewell show to longstanding watering hole Zeppelins. Their sound is an homage to 1950s beats and rebels, aka the cool guys.

Watch the creative process unfold as artist Roman Koenig delivers a “digital performance”, showing the steps from taking photos to live post production to presentation. He’ll be answering questions from the audience in real time, and there will be a live auction on some of his other works. Also, the art gallery’s bar will be open. 🙂

A visiting dance troupe from Kouy community in Steung Treng is putting on a special show this weekend. Choreographed by KHA Sros, “My Village’s Tradition” tells the story of their ways of living, beliefs, language and the relationship between their intangible cultural heritage and nature. Tonight’s dress rehearsal is 6000 Riel/ticket; tomorrow’s full performance 12000-15000 Riel/ticket.

Get down to the (Afro)beat at HClub’s dance party. DJ Indigo will be spinning the tunes and the bar will be serving up happy hour specials.

Meta House has a new dance night – at RenaisHouse “expect nothing less than the best House music has to offer”. Playing episode one are DJs fin_lay, Shibui Q and Zohan (who’s recently come up from Koh Rong).

Cakes & Crafts is having a closing party for its weeks-long drinking fest. To ring out Oktoberfest in style, they’re holding drinking competitions: fastest pint and pint holding. And all of the beers are Cambodian craft beers.

Futures Factory is home once again to a weekend market, Saturday and Sunday, featuring local designers, beachwear, secondhand furniture, glassware, crockery, crafts and more. Plus live music performances by P-Sand from 5–6pm and acoustic pop by Sophie & Jeff from 6–7pm.

Meet your future fur baby at Farm to Table today! Animal Mama will have animals ups for adoption at the outdoor garden restaurant as well as free rabies vaccines for any pets that need it. There will also be a DJ, BBQ and raffle.

Meta House is putting on a double-feature movie night that will make you think. First up is a documentary covering a worldwide travesty: gendercide, or the murder of an individual because of her gender. The filmmakers of It’s a Girl: Gendercide in India and China focus on two countries that are rife with the abuse, abandonment and abortions of baby girls and women. (7pm) Next is Chinese arthouse film So Long My Son. It is an epic tale of two married couples suffering personal tragedy by the hands of the state from the 1980s to present. It’s highly rated and shot beautifully. (8:30pm)

If there’s a day meant for smooth jazz, it’s Sunday. Tonight there’s two options to let you mellow to the classic genre.

Gerard Evans, a talented saxophonist who plays with multiple ensembles in town, is giving a solo performance this evening at a rooftop cocktail bar.

Soul singer Intan Andriana and guitarist Stan Paleco, two other talented musicians who play in multiple ensembles, have teamed up tonight to play a repertoire of relaxing jazz.

Artist Lauren Iida will present a slideshow of her hand-cut paper artwork and public art projects, while also discussing the social practice aspect to her artwork and her mentorship of emerging Cambodian artists. The talk will be in English followed by a Q&A.

Samathi Lake Resort is a lush oasis that makes you feel as if you’ve left Phnom Penh – even though you’ve just gone northwest a bit. Spend a day “out of town” by its lake or pool, sipping on all-day happy hour drinks and trying your hand at karaoke (set up especially for today).

Cambodian writer Ek Tha is celebrating the release of his first full-length novel Long Love, Short Life at Meta House with a book signing and light refreshments. He’s previously written a novella Fight the Enemy, Find Love and non-fiction The Factors Contributing to Cambodia’s Civil War 1950s-1980s: Lessons Then & Now. Ek Tha has worked as interpreter for the United Nations Transitional Authority in Cambodia (UNTAC), as well as a journalist for The Cambodia Daily and Reuters. In 2009, he joined the press department of the Royal Government of Cambodia.

That’s All For Now Folks. Keep Up To Date On Instagram: @Whatsonphnompenh