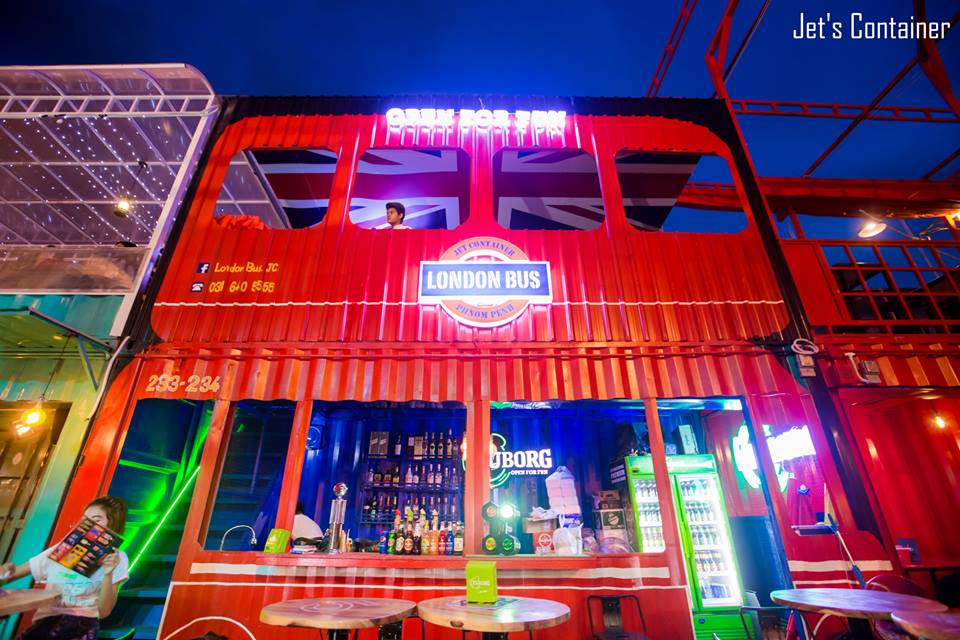 Phnom Penh is a city that changes from one week to the next… and that means ever-expanding options for an awesome night out. The latest spot to take the crown? Jet’s Container Market.

While not as cheap as the more backpacker-orientated stalwarts on 51 and 278, Jet’s Container Market is fast becoming one of the most vibrant – and popular – weekend destinations to drink and dance away your weekend.

As the sun sets, live music acts appear across the venues and the music gets cranked up all round. On the Saturday night that What’s On Phnom Penh last visited, the musical vibe was manic, bass-heavy, hardcore dance.

The pricing reflects the growing middle class of the city: expect to pay closer to $2 for beers and $4 for cocktails in many bars. The energy is palpable, yet oddly the massive crowd took little notice of the pounding dance music the night we were there, instead crowding the ground floor of each available container.

We loved the concept bar based on the famous red London buses – with their own ‘Big Ben’. With so many different themed units, though, you’re spoilt for choice.

The market is advertised as open until 3am, with Epic Club on its doorstep too for further party prospects.

With the soaring popularity of Koh Pich and Jet’s, it’s unsurprising that expansions and new sites are also planned.

One that looks particularly promising is Art Container Market, which recently opened in the Boeng Kak neighbourhood – making use of the drained lake and arty crowd prospering within the area.

The creative space for local artists is completed with over eighty stalls of food and drink delights, combining to fuel a whole evening of culture, art, eating and getting your drink on. Ideal!

With the area hit hard by evacuations, the loss of the lake and the dramatic decline in visitors that followed, here’s hoping this will help breathe new life (and much needed income) into “lakeside”

Continue Reading
You may also like...
Related Topics:Cambodia, Phnom Penh, Things to do in Phnom Penh