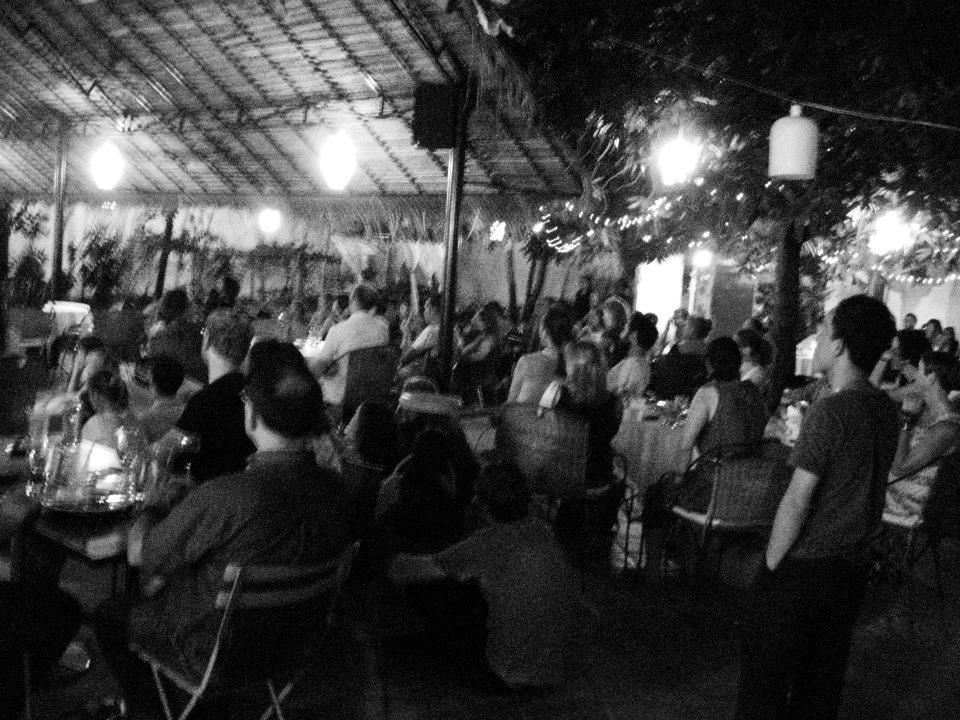 In Phnom Penh, a nerd is never far away. Settle down for a beer on St 308 and before long, some curious individual with an odd obsession will launch into a tirade on anything from drug trafficking through Tajikistan to Taiwanese craft lagers. Rather than just waxing lyrical until the wee hours, ten years ago a handful of these nerds began banding together to launch a night dedicated to the nichest of topics. We’re talking, of course, about the ever-popular Nerd Night.

This Sunday 21st February, to celebrate a whole decade of nerding out, there will be a very special tuk tuk scavenger hunt. Teams will follow clues to visit previous sites of legendary nerd nights. After the chaos, the nerdlings will come together for a decadent celebration at Raffles.

So for those newbies out there, what exactly is nerd night and why are we celebrating it? Well, it’s your chance to learn or teach a curious audience on absolutely any weird, wonderful, unique or just plain strange topic that you can think of.

“Nerd night is a community platform where people who have particular interests share those interests in a format that is called PechaKucha,” says one of the night’s volunteer organisers, Mitsy Chanel-Blot. Pechakucha is an increasingly popular form of story-telling throughout the world. The word (meaning ‘chit-chat’ in Japanese) is a format which limits story-tellers to enthral the audience with 20 slides and no more than 20 seconds of commentary for each one on their chosen topic.

The idea, Mitsy explains, is about trying to prevent the person giving the audience more information than they can process at one time. “What makes a great night is teaching the audience something that they definitely would not have thought or known, “ says Chanel-Blot.

Usually held twice a month, previous Nerd Night talks have covered subjects as diverse as “smart cows”, whether Cambodia should be considered a developing country, and the history of tattooing. For Mitsy, one that recently stood out to her in particular was a very detailed and musical ‘talk’ by a ukulele band that had the whole audience singing along.

Other nights explore niche social issues or challenge preconeptions. Mitsy was particularly intrigued by a talk on the hallucinogenic DMT. “Hey, I would probably never take DMT. But if it was offered I would hesitate now!” she says.

The night can also be a chance to cover personal issues, but bear in mind that you still want the audience to learn something. Mitsy’s first talk was on her own bisexuality, but also encouraged the audience to think of issues such as identity and had a very engaging Q&A after the presentation – a brave decision with with her now-fiancé in the audience!

Sometimes the nights are given specific themes for the participants to explore in their own way, explains fellow Nerd Night organiser David Benaim. These themes range from conspiracy theories to business innovation; on 1st March there will be a Women’s day special. So for anyone that wants to explore some unique feminist ideas or positions on gender in any respect, now’s your chance – and with a captive (and nerdy) audience, no less.

But what about this Sunday? Well, the idea is that you form your own team and then rent out an old school Khmer-style tuk tuk for the day. You will be provided with all the clues from the start and choose your own route through the city. Mitsy asks that you do pause to buy a drink, snack or shot from each bar or restaurant you’re sent to, though.

For those sleuths who do especially well in the scavenger hunt, real-live prizes will be awarded, including trips away to beautiful and under-explored parts of Cambodia. So it’s an opportunity to support those hotels and businesses that are struggling this year. This is also a great opportunity to support the fast-disappearing drivers of Khmer tuk tuks, as without tourists, times are especially tough.

The event itself is free, but your team will need to organise your own tuk tuk (with driver), for which you’ll need to budget at least $20 – and check they’re on board with the game, which will involve abruptly screaming out new destinations when you crack the clues!

The Nerd Night Tuk Tuk Race, 1.30pm, Saturday 21st February. Location TBA. Keen to get involved? Find yourself a team of 4-6 nerds and sign up here.

Continue Reading
You may also like...
Related Topics:Nerd Night

Your Guide to the Weekend: Chinese New Year and Valentine’s Day Edition
What’s On This Weekend?