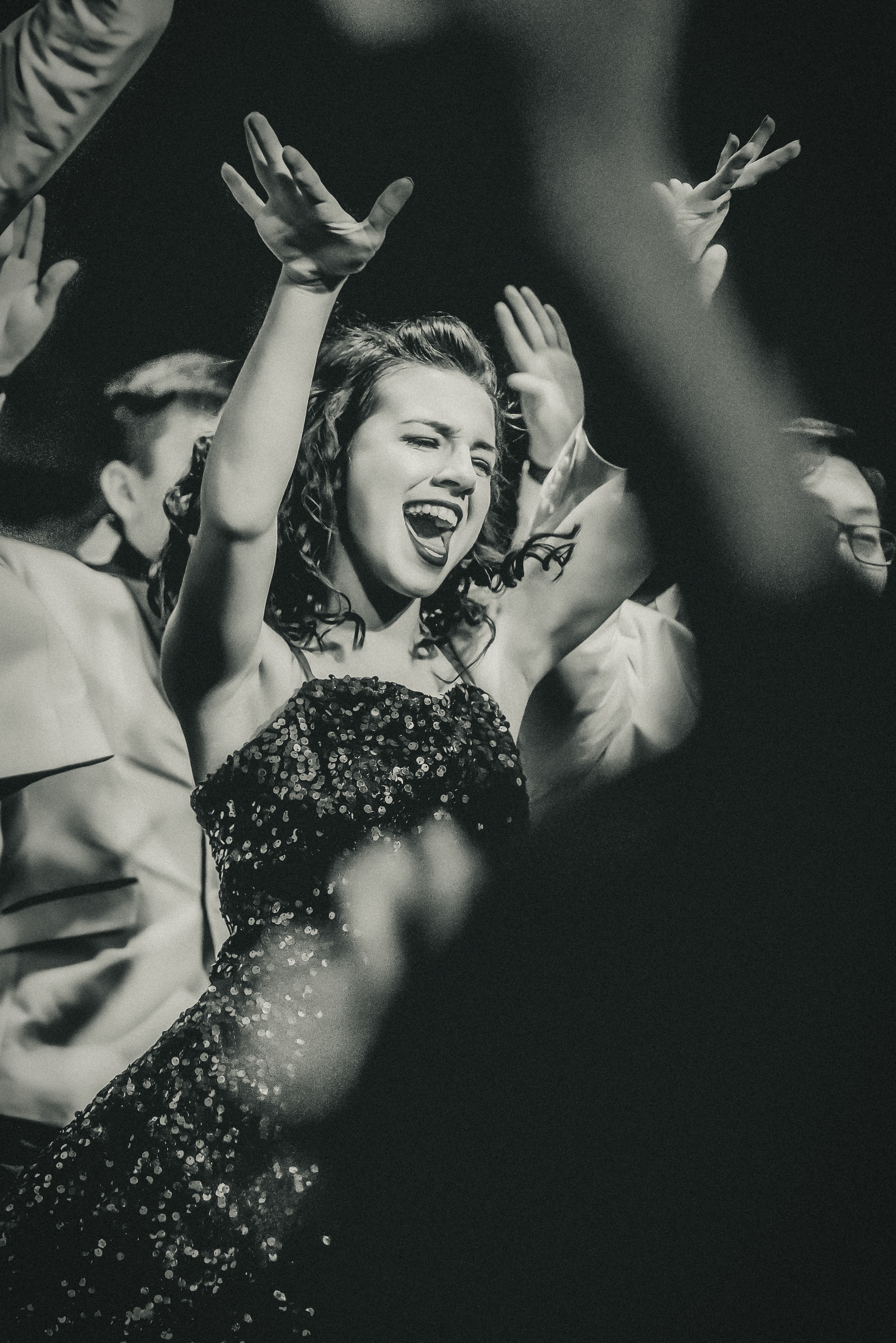 Celebrate women this weekend AND always!

Photo by Todd Trapani on Unsplash

Rotary International is a service organization with groups all around the world, coming together to improve their communities through charitable works. They are holding a fundraiser at The Flicks tonight, showing Humans – a documentary that reminds us of our unifying traits. Tickets are $15.

And on the other end of the spectrum, to remind us that we are not all alike, is Rublyovka, a documentary about Moscow’s famed street reserved exclusively for the powerful and very wealthy. To round out the evening with happier thoughts a little closer to home is a documentary short about famed Cambodian architect Vann Mollyvann. The $2 ticket price includes a drink.

Comedy in Cambodia is putting together a special show at The Box Office, showcasing the talents of touring American comic Ben Frank. He’ll be joined on stage by Sam Thomas (American), Jay B Jones (English), Fred Mace (France) and Molka Remadi (Tunisia) – a veritable cornucopia of backgrounds and jollies. $6 in advance with RSVP; $8 at the door.

Playing at Farm to Table during their dinner service, Charlie and Clara have a unique premise for their show: “Encompassing a time span of 300 years and a geographical origin of half the globe, the cello-and-guitar duo cast their ‘musical time machine’ far and wide for songs to fill an intriguing repertoire”. Couldn’t have said it better myself.

Alright, it’s not a live act…but it’s all the best ones from Australia in the 70s! DJ Swizzle Stixx is spinning “pub rock royalty”, from AC/DC to Australian Crawl to Dire Straits. Harvest Beer is 50% off between 7pm and 8pm, too.

Robin Narciso is back, armed with a guitar and a set list of indie and alternative classics from your teens. He’s playing this solo show under the glowing fairy lights in LF’s outdoor garden.

Loudcloud presents The Goldilocks Zone! The five-piece modern rock band has been influenced by “everything under the sun” – and they’re likely to influence you, too.

Olympic Stadium is home tonight to a free Beer Party (the party is free, not the beer), with a huge lineup up of Cambodian performers. G-David, CG Movement, Sang Sok Serey, DJ Pleng, Tiny Toon and Flipper are all taking the stage at this U Beer-sponsored event.

Toul Tompoung Lane is being taken over! Cocalero liquor is sponsoring the TTP Block Party, serving up their drinks, other drinks and food, and swinging house and disco by DJs Jack Malipan and Sound Advice. It’s starting at 6pm, but going till late!

Motivated by love and perhaps inspired by Women’s Day (but certainly not limited to it), a creative collective has come together to honour and celebrate the women in their (and our) lives. Our Love for Women Vol. 1 kicks off at Le Boutier. Photographers Tytaart and Miguel Jeronimo and clothing designer Jamie Keo will be showing off some of their pieces, while Romain will impress with a live mirror painting. All of this while DJ Marie Thach spins the tunes. The night is sponsored by the cocktail bar as well as Angkor Beer and Somersby Cider.

French-Algerian DJ Moh Green has collaborated with, and produced for, the likes of Sean Paul, Elephant Man, Kiff no Beat, Runtown, Lumidee, Faydee…and tonight he’s performing at Pontoon! Supporting him are DJs Nine, Gang and Funkii Pro. The $8 cover includes a standard drink.

The famed Blue Chilli is having a performance extravaganza tonight featuring the sounds – and hip shaking moves – of Shakira and JLo (as performed by their lovely drag queens and a pole dancer from France!). As usual, the dancing leaves the stage and hits the floor, tonight with DJ Yaya.

CUBIK ▸▸ Fast forward into the future, honouring the future sound of Phnom Penh with the sounds of some of its favourite DJs. Sushi is back (!), joining HypeLab’s Kenny Chase, Shadows of Space and DJ Sequence to play underground house, techno and drum and bass. Free before 11pm; $6 after.

Bill Cunningham was a fabulous human being. Kind-spirited but independent, he photographed fashion on the street for The New York Times as well as at celebrity parties and galas. Never swayed by the fame, he remained in the background, riding his bicycle clad in his workman’s jumpsuit and living in affordable artist housing his entire life. The documentary Bill Cunningham New York gives viewers a glimpse of his unusual life as well as a yearning to be his friend. The $2 ticket includes a drink.

Sra’Art is celebrating International Women’s Day with its WOW (Women of the World) art opening, featuring an exhibition of female-only artists. Each artist’s work depicts a deep connection with Cambodia, its traditions and concepts of beauty. There will be also be a live painting so you can see the magic in the making.

Sinville Roadshow is bringing their big sound, soul music to Alchemy. This is a show to make you dance and feel groovy.

Joshua Chiang – illustrator, musician and general Renaissance man – is playing a solo show at Cloud. He writes his own tunes, but also will perform favourite covers from the 80s and 90s.

Songbird Lisa Concepcion is soothing souls with her sound at LF Social Club. She’ll be playing a solo set of contemporary pop hits.

Alt-indie is getting a special night at Oscar’s on the Corner. Phnom Penh’s Goldilock’s Zone is sharing the bill with a visiting band from Vietnam, Anesthetic Youth, who just released their new video.

If you’ve wanted to be immortalised and you felt that it should be done by none other than yourself, then you’re in luck: Nowhere Art Studio is teaching a workshop of acrylic paint self-portraiture. The $35 fee includes the take-home canvas, paints to use while in class and refreshments.

Seven women-run household item brands are coming together for a joint pop-up shop at Beyond Design. To make shopping extra special, the store will be serving bubbly.

Sushi is back (yes, I said that yesterday, but he’s back!) and playing a gig tonight at Party Patio alongside French DJ DALAH. Expect deep house and tech house at this free dance party.

Kbach Gallery is throwing a triple art gallery opening in honour of International Women’s Day! The debut exhibition for previously unseen artist Koem Keosocheat, “Eyes of Mercy” fuses traditional Kbach elements with contemporary motifs through, specifically, oil paintings of cats. 🙂 Then, the NGO CEDAW is exhibiting a photo exhibit by Dignity Cambodia for Gender Equality called “Endless Patience”. AND artworks submitted by local and foreign artists to Srey Klang to raise funds for CEDAW will also be having their debut in the spotlight. But wait – there’s more! (No joke.) Mel Nutter as Baudelaire will do a silk aerial performance, and there will be live paintings, live drawings, cocktails and, let’s be honest, probably more! This is truly a day to feast for the eyes and soul.

It’s not often that I get to write about concerts put on for children, but here we are: Mimi & the Merrymakers (the combined talents of Marianna Hensley, Greg Beshers, Ernie Buck and Scott Bywater) will be joined by the ISPP Show Choir and two guest performers (Brynne Whitaker and Pip Cree) to put on a special Girl Power concert at Farm to Table today. Actually, they feel so strongly about the message “I am Generation Equality: realising women’s rights” that they’ll be doing the performance twice – 3pm and 5pm.

The Deck is serving up $2 glasses of sangria while musical guest Alli G sings soulful songs as a chilled (literally and figuratively) way to round out the weekend.

Rod Tolentino is giving a special acoustic concert at Ege Bar, playing his collection of alt-rock and reggae tunes. Added bonus if you get there early (like, day drinking early) as happy hour is from 4 to 7pm, with fancy cocktails for $3.

Okay, I love it when Mad Monkey celebrates holidays (truly) because they get creative. For International Women’s Day, and because “an equal world is an enabled world – collectively, each one of us can help us create a gender-equal world”, the party hostel is having 2 for $4 sex on the beach cocktails, free jello shots and $3 “man, I feel like a woman” cocktails…for “LADIES ONLY”. Maybe it’s not so equal after all. Haha. Whatever. Ladies, get your drink on!

Wings&Beers is celebrating the holiday by holding a bazaar, selling clothes, shoes, accessories and cosmetics from stores around town at a discount. To be extra nummy, there’s a fried chicken and salad buffet.

There’s open mic night at Futures Factory, a fun and friendly venue to stand up and try your singing chops in front of perfect strangers – with the added bonus of food and drink vendors to keep you from being parched.

Art of Living Yoga and Meditation Studio is holding a special yoga and Bollywood dance class for women and children alike. Everyone is welcome to share their spirited energy! Costumes are encouraged, too. It’s $6 for the class.

Ain’t it a good weekend to be in Phnom Penh? Have fun, folks!

THE happenings this weekend
Where’s YOUR weekend heading?