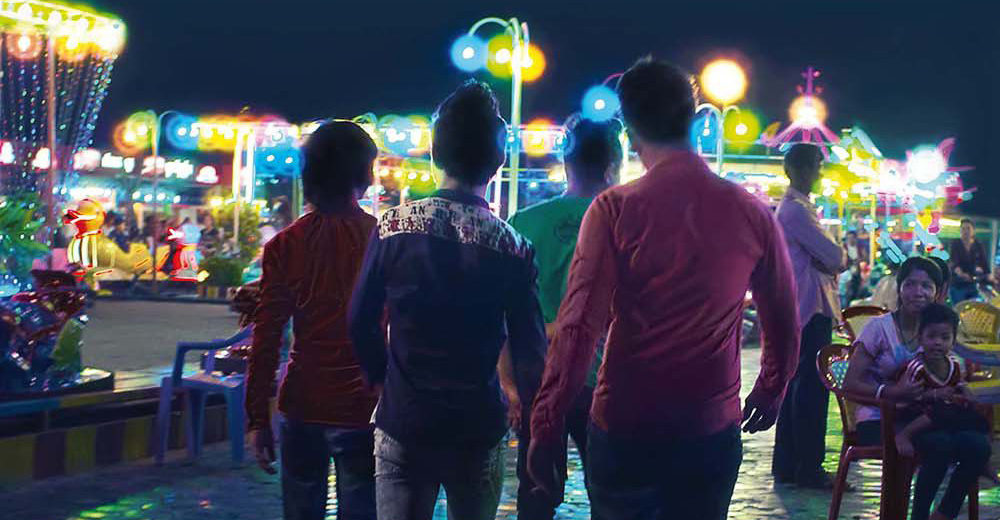 When Davy Chou began sourcing a cast for Diamond Island, he faced a significant problem.

His quietly heartbreaking portrayal of life on Koh Pich, the fast-developing island across the bridge from Phnom Penh, demanded actors that resembled the real people struggling to scrape a living on and around the giant construction sites, funfairs and sparkling new venues emerging from the once-barren patch of grass and sand. In other words, Khmer actors that look and talk like real Khmers.

“The Cambodian movie industry favours actors that look as un-Khmer as possible.”

This was not an easy task. The Cambodian movie and television industry favours actors that look as un-Khmer as possible, preferring tall, glossy, light-skinned stars with Korean-model looks and expensively maintained hair and skin. Hardly the type to pull off the part of an 18-year-old manual labourer who works six days a week in burning sunshine and showers in a communal bucket.

Instead, Chou decided to look for actors whose real lives were as close as possible to those of the characters in his film. For months, he scoured the streets of Phnom Penh and trawled through Facebook profiles, looking for people he could picture in the role and persuading them to come and audition. Once selected, the cast spent three months training to get them ready for the cameras.

“It took time build up trust,” says Chou, who grew up in France but has made several films in the Kingdom – following in the footsteps of his grandfather Van Chann, the prolific film producer who disappeared in Cambodia in 1969.

“Trust that they could do it, but also to trust me, a foreigner. I wanted to show people that sometimes they have talents they weren’t conscious of”

“I wanted to show people that sometimes they have talents they weren’t conscious of.”

The cast didn’t just bring their lived experience to the performances, but to the script, too. Chou, who “can’t think in Khmer”, wrote the film in French (with the help of friend and fellow screenwriter Claire Maugendre), and had it translated into Khmer. The actors pointed out that the literal translations didn’t feel real – it wasn’t how they spoke – and Chou encouraged them to adapt the script to fit the language they used day-to-day.

Cambodian audiences, he says, often comment with surprise on the resulting authenticity, enhanced by naturalistic, understated performances that are a far cry from the exaggerated acting style that generally marks Cambodian soaps, dramas and comedies.

This sense of restraint – emotions and dreams painstakingly kept in check – also shapes the lives film’s characters to poignant effect.

The story follows Bora (Sobon Nuon), a teenager from the countryside who follows his cousin Dy (Mean Korn) to Diamond Island to take a job in construction, in part to support his dying mother back home. His supremely gentle nature means that he never seems fully at ease with his crude, boisterous group of work friends, but catches the eye of local beauty Aza (Madeza Chhem), whose blend of vulnerability and street-smart, sharp-tongued, faux-worldliness make her one of the film’s most compelling characters.

Initially content, a chance reunion with his runaway elder brother throws Bora’s life out of kilter. With the help of a mysterious American sponsor, secretive Solei (Cheanik Nov) has enrolled at university and broken into a circle of rich kids, and as Bora is initiated into their privileged Phnom Penh world, he becomes hopelessly torn between these two worlds – and unsure whether to trust in the wealth of options these new friendships offer to him.

As Chou explains, Diamond Island is primarily about desire: the young characters on Koh Pich are driven by the thrill of possibility, from moving to the capital and starting jobs and lives away from home, to having their first sexual experiences, falling in love, manipulating their identities and choosing how to present themselves to the world.

Behind all of this, Koh Pich serves as a powerful metaphor for this desire – a “translation of possibilities,” to use Chou’s words. As a promotional 3D animation for the development project demonstrates explains early on, Diamond Island is a vision of a modern, glittering future, a picture-perfect lifestyle of luxury flats, and the bright lights and pounding pop of the amusement parks and sprawling music venues that spring to life at night.

It’s a similar idea to that expressed in Steve Chen’s 2015 Dream Land, in which Phnom Penh real estate agent Lida sells modern apartments to a rising elite and increasingly occupies this illusory world of clean lines, towering glass and music video glamour in her imagination, even as her disappointments mount in reality.

But in Diamond Island, it’s not just the emerging middle class that watches their evolving city with longing and wonder, but everyone else, too – right down to the $150-a-month workers building a world they can never hope to inhabit.

“Everyone’s so wide eyed – there’s a kind of wonder, you know?”

“95% of the young people, they buy into it,” says Chou. “If you go [to Koh Pich] at night, it’s fascinating to see how they gather – the university students that head out after class, but also the workers, they all hang out, they’re all looking at the lights, and everyone’s so wide eyed – there’s a kind of wonder, you know?”

But the physical Diamond Island is an artificial creation that imprisons its inhabitants (Aza has never made the trip across the bridge to Phnom Penh, she admits, “because I never had anyone to take me”), propped up by dark and dangerous truths – the fatal accidents, exploitation, and destroyed camps and slums hinted at throughout the film. And so, too, are the characters’ personal desires and dreams.

Bora’s and Solei’s superficial friendships are predicated on their ability to feign wealth and hide their origins, leading them to betray the people they love the most.

Both Bora and Aza cautiously place their faith in fantasies and ambitions that seem so wildly beyond the scope of their universe – and are often wounded by the reality behind the mirage.

These are characters motivated by the possibilities of their future, trapped by the realities of the present, and only occasionally haunted by the ghosts of the past (miraculously, and refreshingly, the Khmer Rouge gets only a single mention!).

Diamond Island is a tremendously sensitive film, with a delicately observed script and inspired casting and collaboration – and a fascinating glimpse into what it is really like to come of age in modern day Phnom Penh.

The film won a prestigious (and well-deserved) award during International Critics Week at Cannes Film Festival 2016 – and here’s hoping Chou’s Cambodian production company, Anti-Archive, continues to raise the profile of Khmer filmmaking for years to come.

Diamond Island is still making its way around the international festival circuit, but watch out for future showings in Phnom Penh. Davy Chou is currently producing his next Cambodian film, White Building, directed by Kavich Neang.