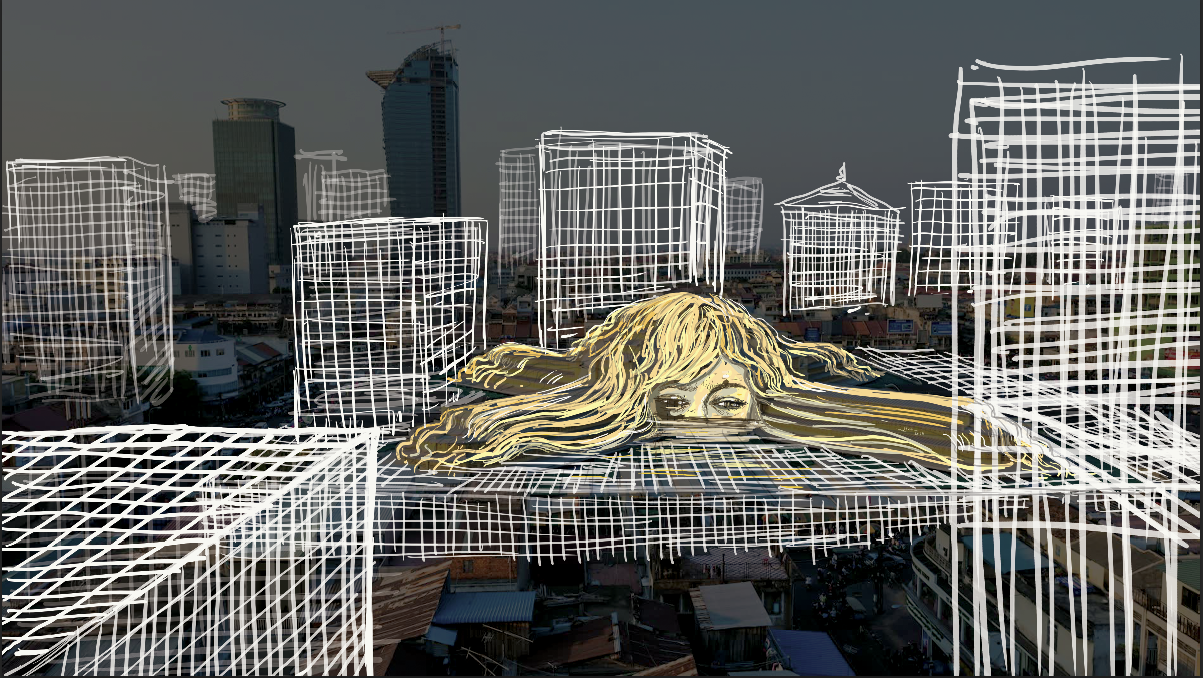 Amidst Phnom Penh’s never-ending construction and development, it’s hard not to wonder what a different version of the city might look like if people stepped back to appreciate the smaller, more personal aspects of city life.

This is exactly what artists Sao Sreymao and Meas Ponleu have done in their first shared exhibition, “Daydreaming”, which opens on Thursday at Khmer Sense restaurant.

“I feel everyone in the city is chasing development and they forget about healthcare, space for living, even I do it sometimes,” Sreymao said via message earlier this week.

Using stock photography of the city and combining it with digital layering to put their own stamp on the cityscape, the duo turn Phnom Penh into a surreal landscape, where the four arms of central market becomes the flowing hair of a woman poking her head out of the ground, while visions of a rarity of nature in the city, grass, sway gently in a sunset.

The idea, Sreymao said, was to “fill the ideas between realism and imagination.”

Sreymao said she wanted to express her anxiety about how rapidly Phnom Penh is losing its connection with nature through her artwork, and yearned for a more thought out, version of her city.

“From time to time I go out of the city and look at it, it feels like we are losing the landscape which is full of space,” Sreymao said.

“We need to have a clear master plan of the city.”

It’s a sentiment Ponleu agreed with, adding that planners could stop the city’s growing air pollution, “if we can grow more trees or green plants to help the air,” she said.

“Is nature still talking to us? I wonder.”

This is the first time the pair have worked together, with Khmer Sense restaurant co-owner, Thierry Poupard noting it was important to have a space for contemporary Cambodian artists to display their work and said the surreal nature of Daydreaming’s multiple perspectives was a highlight.

“Artists are selected either for their traditional or contemporary work, and their creativity,” she said.

“The pictures are based on photos of Phnom Penh with additional people and subjects that talk about vision, interpretations and dreams.”

Growing up in the sleepy city of Battambang, Sreymao graduated from Phare Ponleu Selpak art school.

Ponleu was also born in Battambang but chose to study art and design at Yamada School of Arts in Phnom Penh and has previously been featured at the Lotus Pond Gallery at Plantation Hotel.

Before moving to Phnom Penh in 2009, Sreymao travelled the country extensively, working in environment education with various NGOs in Siem Reap and Kratie. She said her experience in the different towns and cities of Cambodia highlighted just how fast Phnom Penh is changing and hoped its character can be preserved.

“I hope everyone will work hard to protect the identity of the city,” she said.