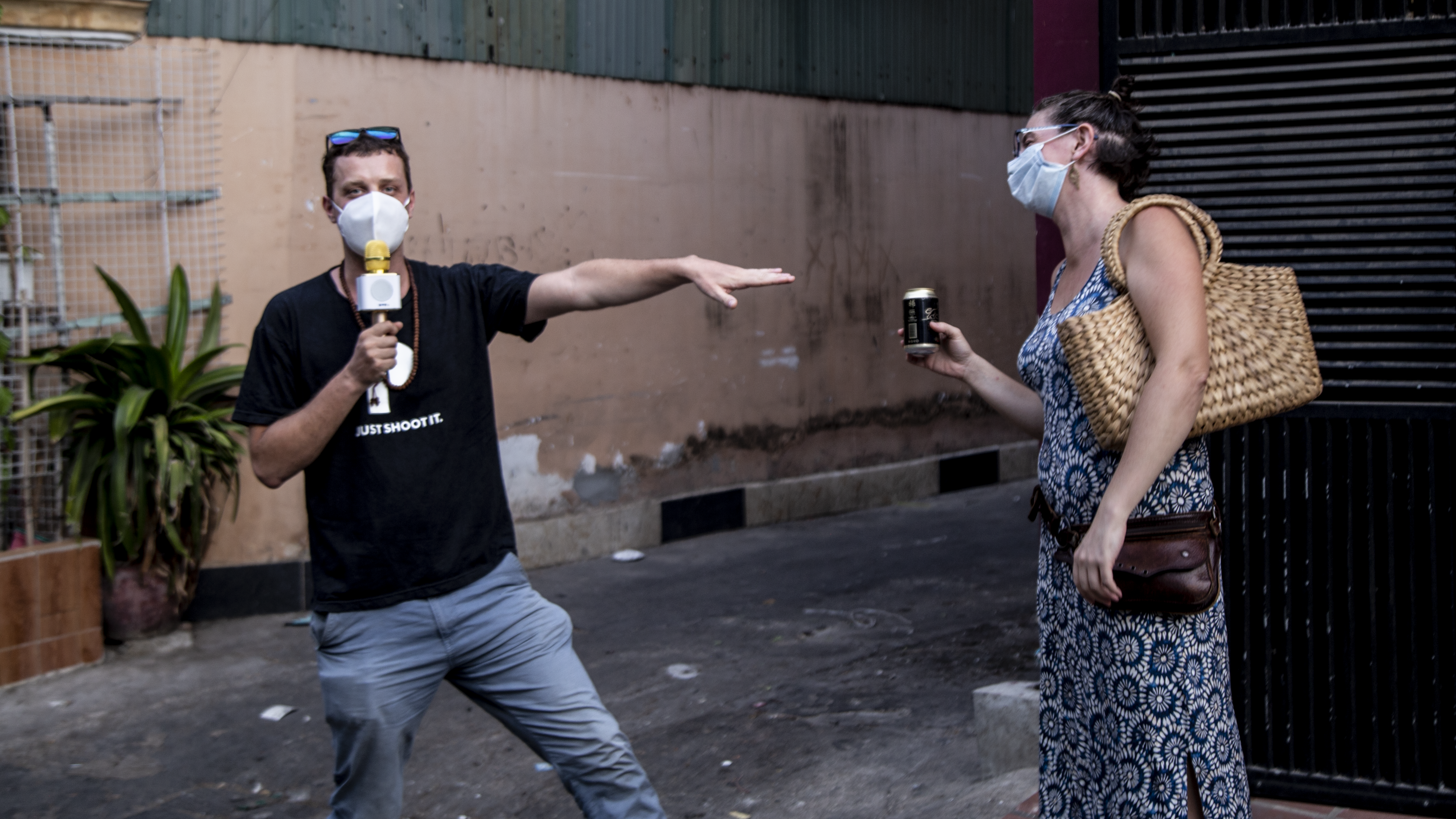 For nearly a decade, Phnom Penhers have been gathering together for a Monday night drink and to learn about everything from prime numbers to shrinking severed heads to backpacking Bolivia to existentialism.

In fact, those four topics alone were covered on different nights over the years by the same person, giving an idea of the diversity of what one can learn on any given night.

That’s part of the beauty of Nerd Night. You don’t know what to expect and you’re excited by the surprise. Speakers can cover any subject with the caveat that they have just over six minutes to do so. And though its format of 20 slides for 20 seconds was inadvertently borrowed from a Japanese group called “PechaKucha”, Nerd Night is something entirely unique to Phnom Penh.

There are ten volunteers who organise, advertise and host each event, and you can expect 100-150 attendees for any given Nerd Night – at times, there have been twice that many. Just as the talks are eclectic, so are the attendees.

“Usually half the audience has never been to Nerd Night before, and I love that”, says Roswell Thomas, Nerd Night co-founder and volunteer. “They’re coming into it and trying something new. And the luxury that we have in Phnom Penh is that there’s usually so many new people coming through, wanting to figure it out and wanting to get a taste of what’s going on”.

It’s become a sort of part social club, part lecture theatre where you can learn more about Bolivia or MMA. But when concerns about Covid-19 hit Cambodia and public gatherings were ordered shuttered by police, the team quickly determined that it needed to move online.

The Transition to Digital

Nerd Night was, I thought, uniquely positioned for a transition to the digital realm – that, in fact, this may be a new future for the group, even after the pandemic is over. With access to the far reaches of Cambodia as well as the world, people could attend who otherwise wouldn’t have been able to and perhaps more speakers as well. Plus, they can share the recorded video with others who may have missed it.

So I asked around to people “in the know”. Current Nerd Night volunteer and “Slide Bong” Mitsy Chanel-Blot responded that live is better. “I would prefer for NN to be in person because it’s also meant to be a networking thing and that aspect is missing from the online version. It turns NN into a presentation series, rather than the more complex community gathering space it has been.”

That’s true. Former Nerd Night member Victoria Wymark, who now lives in Singapore, added to that point, noting that Ted Talks have a winning formula of doing talks live and then posting the videos for anyone interested. And online-only, it’s more likely to get lost in the din of everything digital these days.

Yes, but as someone who’s been involved and is abroad now, I asked, wouldn’t you like to share Nerd Night with a broader community?

“It meant so much to me to be a part of that team, and to have something like that, go to when I was in Phnom Penh… So there’s definitely something quite nostalgic about it for me,” said Wymark. But, she noted, “I don’t think a random person in Singapore that’s never seen it before would have that same feeling about it.”

And because the Nerd Night ritual has become a tradition, because it’s a gathering place for friends, because it has an energy, the speakers who’d signed up to speak pre-pandemic didn’t want to do a truncated version online once the lockdown began.

“We had some people who are going to go in person, and we were like, ‘Hey guys, we’re so excited for your presentation. It’s just going to be on Zoom now though’, and they were like, ‘Yeah, thanks, but I’m gonna wait until it’s live”, recalls Roswell.

But as the “lockdown” has carried on, organisers and attendees have had no choice but to embrace the interim new normal and carry on online, or not at all.

Is It So Different?

Really, at least from an outsider’s point of view, transitioning to online hasn’t changed the fundamentals. Speakers present a PowerPoint presentation and the audience can still ask questions via the night’s host. There continues to be two “Nerd Labs” for the speakers before the big event to answer any questions and to rehearse. (Rehearsing is very important when there’s time constraints!)

“The Nerd Lab is actually better digitally because it was hard to schedule everybody’s calendars at the same time”, opined Victoria. “But now during lockdown, when everybody’s available you can get them around the same table, I imagine”.

Nerd Night is now hosted via Zoom and live-streamed to Facebook (the latter was already happening for in-person Nerd Nights, but now has been given more weight). Viewers can type in their questions for the speakers via either platform.

Even in subtle ways, it’s the same.

For example, Roswell noted that at live Nerd Nights the host holds the microphone in order to save time and people shout their questions to him or her. “But for Zoom, originally we were thinking ‘Hey, this is the time when people can get on the microphone and they can ask a question, and they’re gonna love this…’ But then everyone automatically just started asking questions in the chat. You offer them the chance to unmute, but they just keep on mute and type in a question in the chat”.

As we all instinctively know, people’s dynamics aren’t the same when they’re communicating from behind a digital screen.

This is probably why the online version of Nerd Night’s breakout rooms, attempted in the first few iterations, was not very successful. Normally, there’d be a break halfway through the in-person night where people can get a drink, stretch their legs and mingle with each other. Obviously the first two are the same at home as in person, but forcing people into small talk in the online version by creating small, randomly selected groups proved too difficult.

“We had some sort of just like dead, boring breakout rooms where people felt awkward,” said Roswell, adding, “I remember the first Nerd Night, I was assigned to a breakout room, and no one was talking. Everyone was on mute, except for one guy who’s like, fighting with his kids [to go to bed] and didn’t mute himself… We’re just hearing that in our breakout room and I was like, ‘this breakout room sucks!’”.

It was too far astray from normal socialisation to work. If you’re alone in a large gathering, you may force yourself to talk to people, but when on the computer at home, the natural inclination is to hide in anonymity.

The breakout rooms have been replaced by a “white board” that lets people collectively doodle during the ten-minute pause which seems to be popular.

Another unfortunate setback of being online is the connectivity issues, aka bad internet or things like mics cutting out. And for these issues, there’s not much the Nerd Night team can do.

Of course, that being said, mic and electricity issues are no stranger to in-person Nerd Nights in Phnom Penh.

There was a popular bluegrass band in Phnom Penh years ago, Roswell recalls, that had agreed to play Nerd Night, spending 20 seconds describing a song and then 20 seconds playing it. “Then right before they went on, the power went out”. And even when the electricity came back, the sound board didn’t. But the band quickly regrouped and told everyone to gather around them as they played acoustically, with the slides running in the background. “And it was so much cooler!”

Those moments – the spontaneity and camaraderie – are what’s missing in the Zoom version. To bridge this digital divide, organisers came up with an ingenious version of socially distanced camaraderie – delivering free beers to raffle winners via tuk tuk, live on air, throughout the event, providing some “commercial break” entertainment during what would be a breakout session.

“Beer tuk tuk was good”, said Roswell. “I definitely had to remind [NN volunteer Fred] to stay two meters away from everyone”.

But participation in the raffle was low.

Roswell was befuddled. “I was surprised because we put up that signup form for a lucky draw, and I was thinking ‘It’s free beer. This thing this sells that stuff’, right?” When he asked some people he knew if they’d be signing up, they told him no because they’d be going out for at least part of the evening.

“I’m thinking maybe people will have seen the beer tuk tuk, and they’ll want to sign up, so I think we might try it again”, he added.

(As a side note, I also would like them to do it again because free beer delivered to one’s home is a fabulous idea that everyone should get behind. Clamour for it to come back!)

The group has also tried a couple themed nights. Theme nights have proven successful for the in-person events (the first Women’s Day and the first Pride one each had 300 people), and the online version appears to have potential. Fashion Revolution Cambodia’s Fashion Week Nerd Night on April 20 drew 90 attendees and was viewed online by many more after the fact. But this week’s environment-theme only drew half that amount.

One thought as to why is that people are going out more as the rules within Phnom Penh are (unofficially) loosening. But also, at the same time, the steady feedback and demand from fans are far from making this Nerd Night’s “give up the ghost” moment.

“Yeah, I think the guy’s doing a really good job of keeping it, and I can see the same faces that would have been there in person, attending online. Not as many, but people are definitely turning up”, said Victoria.

Bringing the Nerds Back to Live

It seems that nothing can replace the magic that is Nerd Night – not even digital Nerd Night. There’s a strong desire within the team to bring back the live event and evidence suggests that it’ll be welcomed back with open arms.

“There’s such a fire you get when you have people together live, in person. So if you’re asking if we could go to a bar, would we do a livestream instead? Absolutely not”, answered Roswell to my ultimate question.

So when can we expect that? Two weeks after “there’s a big party where there’s a lot of people in close proximity and that’s okay”.

In these uncertain times, it’s hard to say when that will be. It’s best to appreciate the efforts that have been made to keep the tradition and experience alive: come up with topics you’d like to speak about regardless of if they’re in person or not, and sign up for the free beer tuk tuk the next time it’s coming around – because why not? Embrace the new normal. It may not be forever, but it’s what we’ve got now.

“I think that Nerd Night is not very nerdy if we’re like, ‘Oh come on. We’re gonna have a big party even though it’s not okay’”. Roswell joked. “Like, no. Nerds only come out once it’s fine, and even after it’s been fine for a while they still have like a face mask and like hand sanitiser”.

If you want to participate in Nerd Night, sit in on a night or try to grab a free beer, head to their Facebook page. The next event will be Monday, June 8, 8pm.