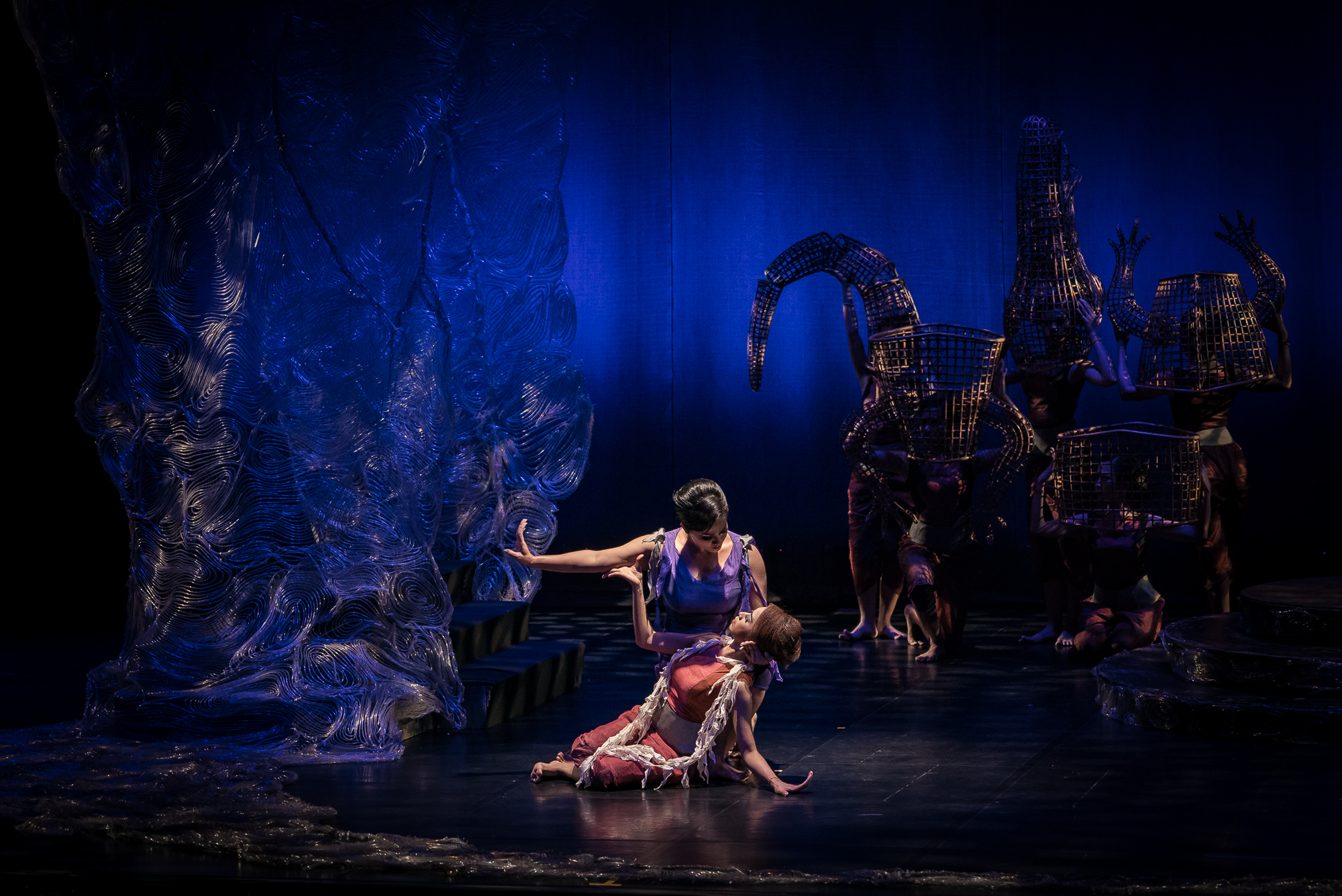 It’s no surprise to learn that Sophiline Cheam Shapiro has dedicated her life to dance: you can tell from the way she moves. Now in her 50th year, the renowned choreographer no longer appears in her own productions, but every gesture of her hands carries the lightness and grace that defines classical Khmer ballet, fingers and hands contorting effortlessly to mimic cycles of bloom and fruit.

On stage, her talented ensemble perform, too, with hypnotic elegance. Opening at Vann Molyvann’s iconic Chaktomuk Theatre last night, her show A Bend in the River brings together many of Cambodia’s most respected theatre practitioners, including the composer Him Sophy, set designer Kong Vollak, sculptor Pich Sopheap and costume designer Pich Sopheap. The result is both moving and mesmerising.

The piece deals with themes of retribution and making peace with the past – concepts of great personal significance to Sophiline, who lost her father, grandmother, two brothers and many other family members during their forced relocation to Battambang by the Khmer Rouge.

“When we returned [to Kandal], we found that the family home had been burned to the ground. My mother was never able to recreate the life we’d had before the war,” she says. “This question of revenge, it stayed with me.”

At that time, tales of revenge killings of ex-soldiers were rife. But despite her loss, the brutality of the reprisals did not sit right with Sophiline.

Instead, she became one of the first students to enrol in classical Khmer dance at the National University of the Arts, and looked to the example set by her uncle and dance teacher, who worked “night and day” to restore and preserve the rich, ancient cultural traditions that the Khmer Rouge had all but obliterated in just half a decade.

“That was their revenge,” she says.

A few years later, Sophiline stumbled across a traditional Khmer folk tale about a girl who is killed, along with her family, by a giant crocodile and vows to avenge this in her next life – cursing herself to a cycle of violence that destroys any future joy. The story made a deep impression on the young dancer and, she says, she waited many years for an opportunity to dramatize it.

In the meantime, Sophiline won a scholarship to pursue her studies in dance and ethnography at UCLA in California, eventually securing the funding to choreograph and direct her first full length Khmer ballet – an ambitious adaptation of Shakespeare’s Othello, which also deals with toxic cycles of betrayal and revenge.

A string of other successful shows followed until, in 2011, she finally began working on A Bend in the River. The play first toured Cambodia in 2014, now returns for just three days, fine-tuned and complemented by exquisite set and lighting design.

The story follows Kayley, a young bride-to-be, who is killed along with her family and bridal party by a giant crocodile on the way to her wedding. She vows to be reborn as a crocodile herself, solely to wreak the same viciousness on her murderer.

When she hatches, a religious hermit finds and raises her. He teaches her the virtues of gentleness and forgiveness, and as she rediscovers her humanity she is able to transform herself into a physical human – almost succeeding in finding happiness. But, when confronted with reminders of her past life, her rage and urge for retribution are too strong. She gives in to the violence that dooms any chance of happiness.

Sculpture, clever lighting and costumes inspired by underwater plants beautifully conjure the world around and inside the river, and the rich symbolism and abstract elements of the piece are handled delicately, to powerful effect. In one impressive scene, the two crocodiles swim and play beneath the surface, their bodies represented by sculpted rattan baskets, manipulated by the dancer-puppeteers. In another, the crocodile-Kayley curls, broken in despair, at the feet of her mentor, while the human-Kayley leans against his lap, begging forgiveness.

Given the technical skill of the performers, it’s hard to believe that these young women and girls (plus the one male lead) are drawn from one, local pool of talent in the village outside Phnom Penh where Sophiline and her husband John run the Khmer Arts ballet company and dance school.

Reaching this level of expertise is no small feat. As John explains, the performers in the ensemble are all from low-income backgrounds, with many of their parents tuktuk drivers and washerwomen who had to dedicate up to half of their income to fund years of intense dance lessons. But their passion has paid off – on its first night, the show ended to riotous applause and well-deserved standing ovations, as well as tearful tributes from older audience members who remember the flourishing of Khmer arts that was stymied by the war.

With only two performances left – tonight at 7pm and tomorrow afternoon at 4pm – this is a unique opportunity to see Khmer dance at its finest, in a location built for precisely this purpose, when Phnom Penh was at its peak. It’s a stunning production that’s not to be missed.

Tickets are available on the door at Chaktomok Theatre, Sisowath Quay, and cost from $5-$25 depending on your choice of seat. Show times: 1st April, 7pm; 2nd April, 4pm.

It’s FRIDAY! Here’s Your Roundup of What Not to Miss This Weekend
Khmer Modern Art Comes Home At Last