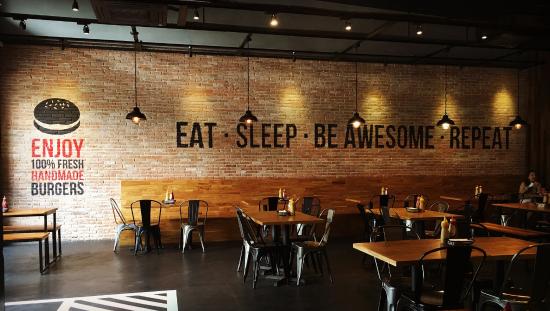 My BurgerLab – The Bros
Patty Bacon strips and red onions grilled with honey mustard, topped with a piece of crispy seaweed.
$3.50 – side of popcorn chix $2.50

Smack bang on the busy Norodom Boulevard (41), this slick munch museum is a short walk from the boozy favourites of bkk1. The venue is large, welcoming and definitely one of the trendier burger haunts visited so far. Ordering is made at the counter, although they’re looking at changing this system in the near future to allow customers more time to decide between the exciting options without holding up the queue.

Having previously tried a mini, I opted for a larger choice this time round. Unfortunately demand was high for ‘The Hangover’, and having arrived at 3pm, I’d missed out on some ingredients due to a lunch rush. I picked out ‘The Bro’, having never had seaweed on a burger before – and also being endeared by the honey mustard topping.

Popcorn chix are a delightful take on chicken nuggets. Salted, a dusted with black pepper, these fried chicken bites in a crispy coating could quite easily muscle their way into the hearts of many – since half my newsfeed seems to be people posting memes about how nuggets are life. Served with ketchup and the ‘x sauce’ – which I’d believe to be a spicy mayonnaise – a generous portion for value makes these an ideal side.

Expecting a black bun, I was surprised with a more modest pink bun. The reason for the colour change was a homage to ‘Pi Pay’, the app that lets you get 40% off your order. MyBurgerLab have been working with Pi Pay for a while now, and wanted to show their appreciation to the brand with this gesture. The pink bun gets its colour from being beetroot infused, giving the bun a great added flavour without being overpowering. Upon first bite, I was greeted with a delicious zesty tang from the X sauce and I savoured the taste of mustard from all the flavour combos; I’ve always been a huge fan of mustard, and due to it largely being imported to the Kingdom, it’s rarely provided as a condiment here. The crispy seaweed topping was an interesting texture, and it worked well alongside the bacon – I’ve even heard there’s a Japanese seaweed that’s meant to taste like bacon… so the two may be a match made in heaven.

The Bros was delicious, it was a great sized burger and had a decent mix of gourmet toppings and quirks to have me invested in every bite.  I’d give the Bros Burger 8.5/10 –  Whilst the pink buns are limited edition, so the taste may vary slightly upon return to the flagship black buns.

Continue Reading
You may also like...
Related Topics:eating in phnom penh, Frazer Vs Burger

Mother! Might Just Be the Horror Film of the Year
Where to Watch Rangers Vs Celtic in Phnom Penh