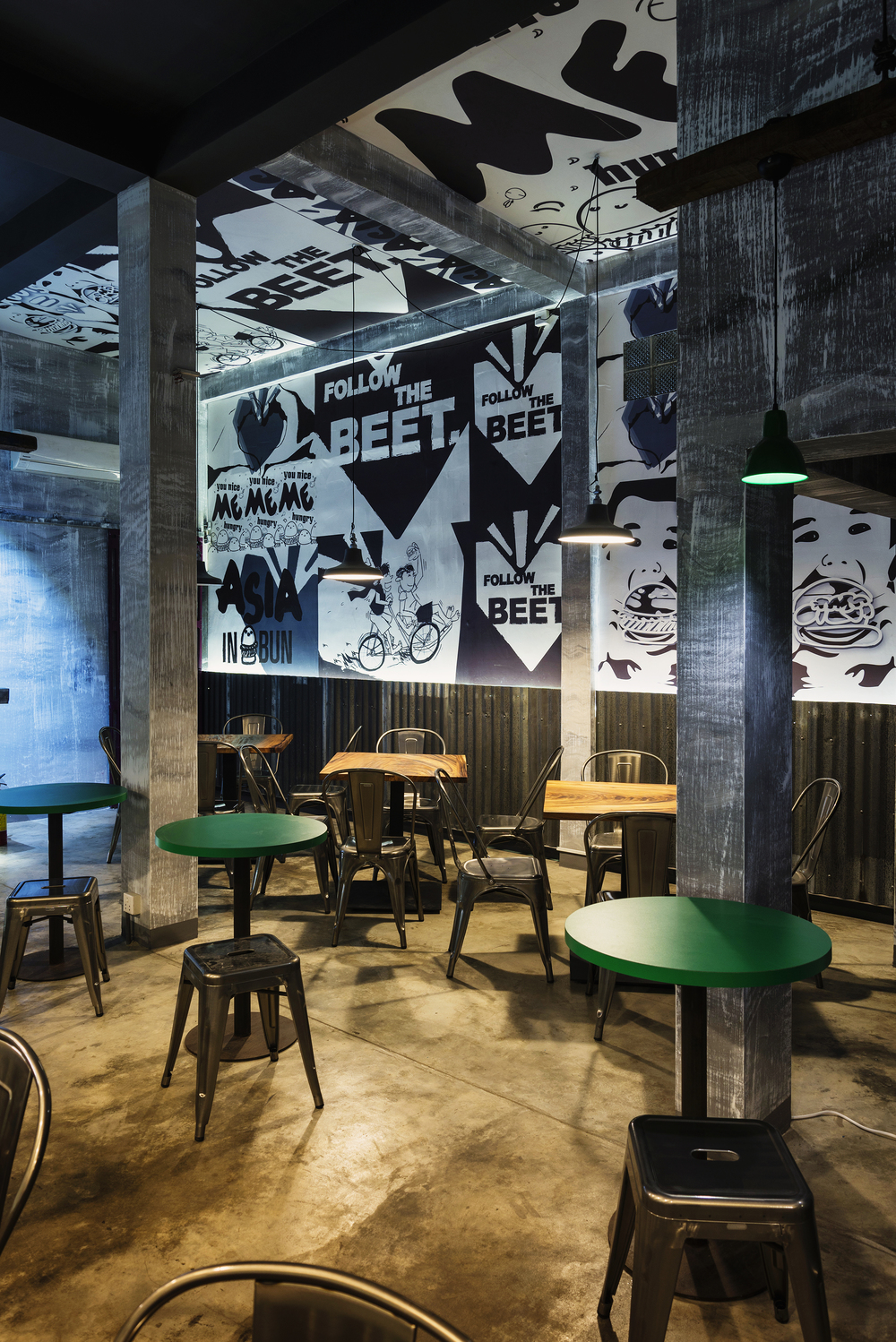 RnB Asian Beef Burger
Premium Beef patty, ginger + sesame sauce, lettuce, tomato (I added bacon for an extra dollar)
$5.95 (+$1 for bacon or chedder), served with a side of fries and side salad.

Roots N Burgers is a short hop from the Russian Market, furnished with a nice grungy contemporary feel to it. Occasionally hosting events, you can find yourselves tucking into burger whilst also digesting stand up comedians at the same time.

There’s a happy hour every day from 5pm – 7pm which offers all beers at $2, Sangria at $2 and cocktails and wine glasses at $3. They also celebrate the social, with Thursday being named the ‘Friends Night Out’. This entails 20% off baos & burgers for groups of 4 or more between 5pm and 11pm.  Unfortunately for me, I was dining alone today, to which the server enquired:

Thanks Server! *sobs into burger for extra lonely flavour*

As the restaurant describes itself as ‘An Asian fast-casual burger concept that focuses on delivering a healthier indulgence’ I decided to aptly go for the Asian Beef Burger.

The beef is advertised as being sourced from outside of Cambodia, but the ginger & sesame sauce seemed to be the Asian fusion twist.  The bun is bright pink, something I’d only seen before during the Pi Pay celebration at MyBurgerLab.

I decided to add bacon to the creation to bulk up the toppings more.

A portion of small fries is advertised as an accompaniment for all burgers, although in reality they were a lot chunkier and generously sized than competitors. I was also given the pleasant surprise of a side salad plate, garnished with a vinaigrette dressing.

The fries were pre-seasoned with salt, just enough for my liking. A small dish of ketchup was also given to me, which sufficed. There were no condiments on the table but I’m sure the options were there.

I was particularly impressed with the surprise salad, which helped reinforce the mission statement of healthy flavours.

Again served on a wooden board, the burger fared well in size. The first bite revealed that I would not be leaving hungry, as the patty was quite dense and the bun light and fluffy. As I bit in more, I started to get the flavours from the ginger & sesame sauce, which was pleasant but mildly overshadowed by how thick the burger felt.

The bacon was nice and crispy, and always a welcomed addition, although for once I mused removing it purely to get less of a meaty flavour and try and savour the Asian inspired sauce that had made me choose this burger in the first place.

As with a few other burgers around the city, Roots N Burgers managed to deliver on the pretence of making a burger healthier. The salad garnishing and beetroot infused bun gave a lighter balance to the premium patty.

I was content with the burger but I wasn’t yet blown away. RnB also have their own tuk tuk that pops up at various events, such as the Samai Distillery open nights on Thursdays. Perhaps next time the veggie options should get my attention. I’d give the RnB Asian Beef Burger 5.5/10 –  It gets the job done, leaves you feeling full, packs all the punches expected for a beef burger – but where it falls down for me is the lack of ‘Asian’ fusion flavours, leaving it feeling closer to a nice standard beef burger, with a lot of other exciting offerings available I’d suggest sampling one of their other exciting options.

Looking for different flavours? Check out other reviews in this series here:

Frazer Vs Burger: ‘The Bros’ @ MyBurgerLab

What To Do In Phnom Penh When It Rains
Frazer Vs Burger: Patty Melt @ Mama’s New York Deli