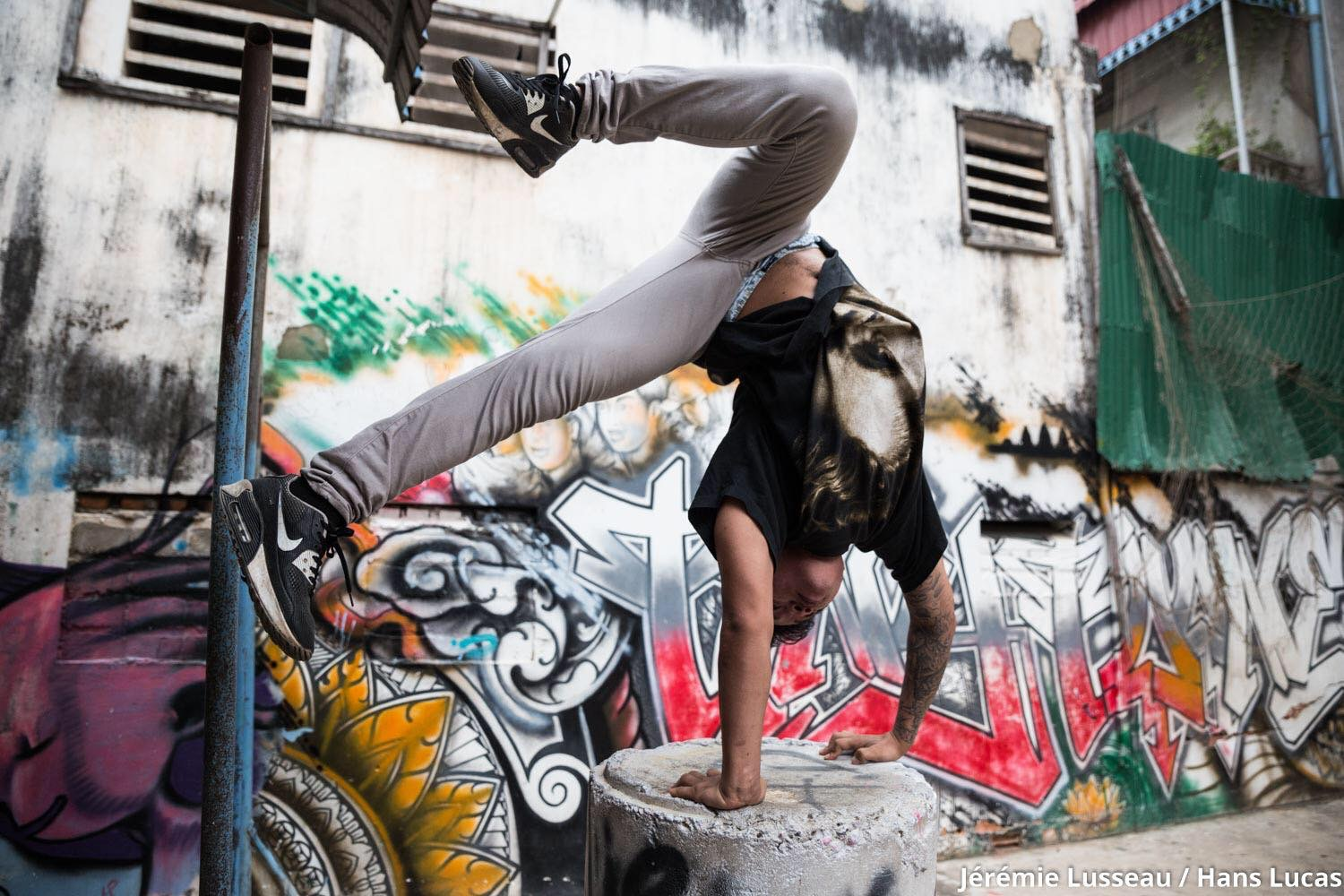 When KK, a Khmer refugee born in a Thai camp and raised in California, was deported to Cambodia 13 years ago, things looked bleak. Having grown up in what he describes as “the ghetto” in Long Beach, KK got involved in gangs in his youth, had a few run-ins with the law, lost his residency in the States and ended up being sent “back” to Cambodia – a country he’d never visited before.

Once in Phnom Penh, KK planned to keep his head down, quietly volunteering with an NGO that helped people suffering from HIV and drug addiction. Before long, though, word got out that KK had an unusual talent – breakdancing – and people started pestering him to teach local kids.

At first he was reluctant, “but then they brought me this little munchkin and I was like, you’re so cute, let me see what you got… he reminded me of my son.”

From agreeing to teach one boy from the slums how to breakdance in his small apartment after work, KK says things quickly “got outta hand”. More and more kids turned up asking for lessons, and when KK realised that most couldn’t afford to go to school, he ended up housing, feeding, and paying for a teacher for many of them during the day. Eventually, he managed to get financial help to turn his unplanned NGO into a proper school, and Tiny Toones was born.

Today, there are 100 children at the Tiny Toones school in Chbar Ampov, where they’re taught core subjects alongside dance training and art lessons. The courtyard is splashed with striking, full-scale pieces by some of Phnom Penh’s best street artists, and the centre has an impressive record of producing professional dancers, DJs, rappers and hip hop artists, as well as getting students from disadvantaged into higher education and then into jobs in finance and business. The NGO says 96% of kids enrolled at Tiny Toones go on to meaningful employment.

For KK, making sure all the kids get a solid education, and get used to focussing and working hard, is as important as the creative freedom the centre offers. “Their dream can be anything, but they have to chase it. You have to try,” he says. “Their future is in their hands. It’s not in my hands. I can only get them to a certain point.”

That message clearly hit home for Sang Sok Serey, who first got involved with Tiny Toones in her late teens and quickly discovered that, while breakdancing wasn’t her thing, rapping was. After getting over initial nerves, she says, she forced herself to perform and “just started killing it”. Seven years on, she has a record deal and string of popular releases, including collaborations with Cambodian stars like Nikki Nikki, Khmeng Khmer and Khmer Pride.

“I just proved them wrong,” shrugs Serey, who says she had to battle her fair share of sexism and skepticism to carve out a name for herself in the industry. “I don’t fight people in real life, but I fight them in my music.”

Now, she tries to use her lyrics to inspire other people from difficult circumstances to fight their demons and find the strength to persevere. Khmer music is dominated by melancholy love songs that emphasise hopelessness and even suicide in the face of adversity, and Serey is adamant that she wants her music to do the opposite. Her biggest hit, The Light, was inspired by the story of a young girl she knew who was abandoned by her parents and struggled to find the will to carry on. It’s an anthem to survival and self-sufficiency that Serey says she wrote to motivate not only that particular girl, but other Cambodian kids in similar situations.

“It makes me really happy when people say thank you for making this song, that it helped make them strong,” she says. “Sometimes we need to show people what they can do. You should do whatever you want and whatever you love… Keep fighting.”

Another success story is breakdancer Slick, who was first introduced to Tiny Toones at 14 years old. Slick was kicked out of his family home when he develop a meth addiction, and had been homeless for a year before a friend gave him KK’s number.

“I saw hip hop [dance] on TV and I told KK I wanted to learn. He said if I wanted to do it, I had to stop the drugs.”

It wasn’t easy. Slick had a few relapses before finally managing to kick the habit, but he says KK was “like a father” to him, supporting him all along the way. Now Slick teaches breakdancing to the next generation of kids at Tiny Toones and has just successfully auditioned for Cambodia’s Got Talent.

10 Years In the Making

Clearly, Tiny Toones has a lot to celebrate – and some of the country’s biggest artists are lining up to get involved. Tomorrow, the organisation hosts a huge (and free) party at The Factory, with performances by Sang Sok Serey, KlapYaHandz, 12me, Kreative Kings, Khmer Thorsue, DJ Cake, DJ Niko Yu, DJ Jay, DJ Shadow, DJ B-Roc, Kbach Crew and others, as well as the Tiny Toones Crew.

It’s a pretty impressive outcome for project that started a decade ago in the front room of a deportee who was worried he’d used up his last chances. But as KK says: “It’s all about patience and dedication, and I believe anyone can change… It doesn’t matter where a kid comes from, what matters it that you show them they can be anything.”

Tiny Toones 10 Year Celebration, 12-6pm, The Factory, National Road 2. Entry is free. You can also support the amazing work of the Tiny Toones project by making a donation here.