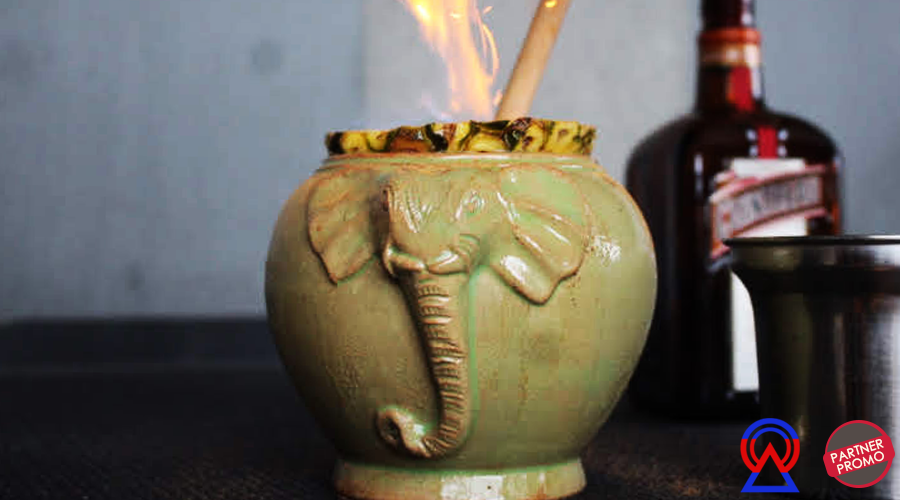 Cinnamon slowly drizzles down from a mesh sifter onto an alcohol-soaked slice of pineapple. It’s hardly noticeable, but the pineapple is also on fire – a low blue flame hovers just above the piece of floating fruit until the tiny drops of cinnamon bark ignite a spark that causes the flames to roar up in a yellow-orange hue high above the glass.
We’re sitting on the rooftop bar of the Courtyard by Marriot and, knowing that there would be a fire show involved, I’ve come up close to watch the bartender make my aptly-named “Elephantastic”. The drink, a heavenly combination of Hennessy, Benedictine, juice from the Cambodian Pursat orange and palm sugar, is served inside a large ceramic elephant’s head with the aforementioned floating fruit and fire.

Not to be outdone, my friend also orders a flaming drink, the “Maverick Martini”: a flaming slice of passion fruit floating in a blend of vodka, vanilla syrup, passion fruit juice and sparkling wine. The sparkling wine, our bartender tells us, softens the strong taste of the vodka. She’s right; the drink was incredibly smooth, and one could easily indulge in multiple.
When planning The Deck bar, Courtyard by Marriot wanted to create something special for cocktail lovers, something “extra”. In Phnom Penh, tall buildings seem to be added to the skyline daily, and as the number of buildings increases, so does the number of skybars. But just because someone has a roof, doesn’t mean that it’s the right place to take in a view. Quality and comfort are what sets one apart from the rest – things that The Deck clearly had in mind when planning their space and the drink menu.
To ensure that they have the best-of-the-best drinks on offer, The Deck turned to professional mixology company the Cocktail Professor in Bangkok to develop their unique menu. After creating a selection of ten drinks that incorporated Asian flavours or unusual combinations, the Cocktail Professor trained the hotel bartenders on how to prepare each one, over a week’s time. It’s not just the combination of liquors, but the intricate delivery – in upside down glass beakers with stoppers, with floating flowers and herb garnishes and, of course, in flames.
The combinations often come from homemade, infused spirits. Vodka for the “CoCo Martini” has been steeped in shaved coconut and coconut oils. The “Bloom Bloom” includes the infusion of the already-flavourful (and delicious) Botanico gin with fresh lemongrass and rice paddy herb, or ma’om. Even the drinks that are staples – like an “Old Fashioned” or “Bee’s Knees” – have their own local take by including palm sugar instead of sugar cane, or lime instead of lemon.

But what makes the skybar’s menu even more special are the drinks that were developed by their longtime Cambodian bartender, Chan Manin. He spent years tinkering with flavours, such as the herb ma’om, often used medicinally, to come up with really clever cocktails.
For the “Cambodian Herb”, they’ve infused rum with ma’om and added the unexpected combination of cointreau, crème de cassis, green capsicum, ginger syrup, bitters, salt and lime. Immediately one can smell its herbal nose and the taste of green bell pepper comes to the tip of the tongue; it’s slightly tart and very refreshing. His other creation, “First Reminder”, takes a vodka and cointreau base, but adds sugar, lime, Tabasco and olives – another tasty treat.
We sampled these myriad flavour combinations while leaning back on the plush cushioned-seats, looking out over the trees across the street, to the landmark buildings and river in the distance. Or strolling around the rooftop to see how the setting sun was colouring the skyline in other directions. Or admiring the hotel’s light blue pool, one level below, brightly lit against the dusk.

This would be a nice place for a party, I think, and ask if it’s possible. Turns out that it’s not only possible, but that they can cater to all sorts of groups and events. You can rent the whole roof, or just a section, and select a menu of finger foods and drinks tailored to the party. If you want music but don’t know a DJ or a band, they can organize entertainment too. They are totally prepared to pull together a memorable event, and all you need to do is show up and enjoy it.
That sounds wonderful, I say. Not quite ready to part from my cushy seat back or the calm view of the city below, I order a “Bloom Bloom”. And it’s delightful.