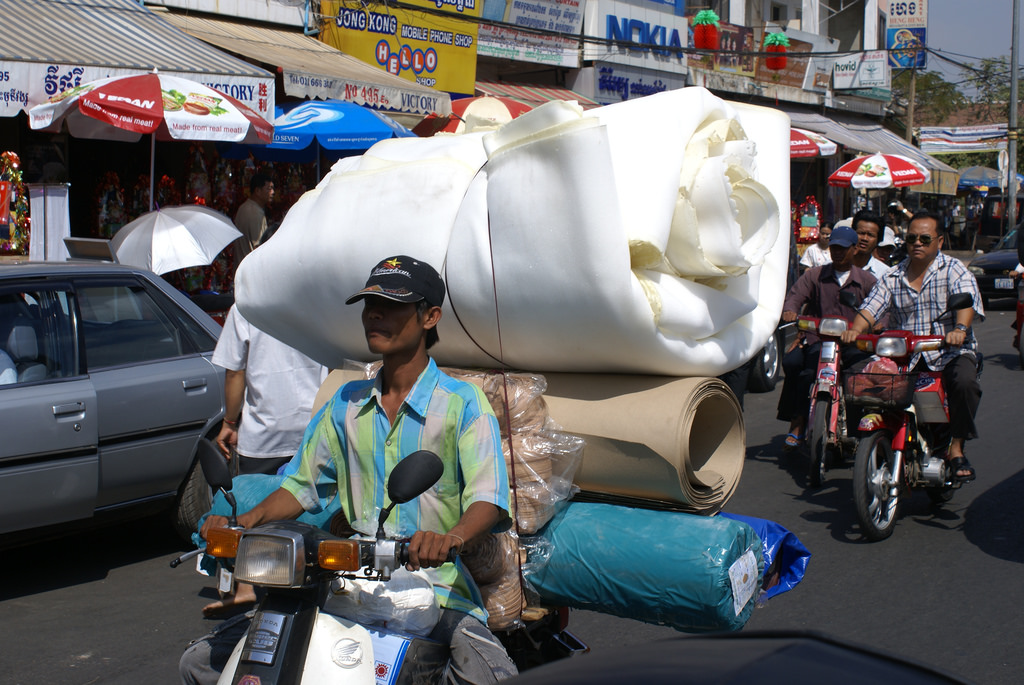 The chaos of Phnom Penh streets is the reason for many, that they fall in love with this vibrant city. The eclectic mix of street food vendors, gentle old ladies walking in amongst the traffic trying to sell some nuts, motorcycles deciding if the pavement seems a good option today, Tuk Tuks being their usual unpredictable self and a never ending battle between oversized SUVs trying to assert dominance over the roads.

The chaos of these streets is also the reason that it is never an easy city to get around. Congestion in Phnom Penh costs the country an estimated $6 million a month. So What’s On Phnom Penh wants to let you guys know the best way to get around the city, so that you can make it to the wonderful nights that we tell you about on time!

Ahh my personal favourite. The Motodup or Moto is simply a motorcycle taxi. The thing is, it is a as official as anything else in Cambodia, so do not expect any signs or licence that identify it as a taxi. It is simply a motorcycle that looks like any other. As such they can at times be a little tricky to spot. Usually a simple shout of ‘Moto’ will see one being presented to you pretty instantaneously.

The Motodup is liberating when you are suffering from the scorching heat of the hot season and need some immediate relief. You will zip in and out of the traffic in the quickest way possible, providing a wonderful breeze that only a quick jaunt on a motorcycle can do. It is especially useful in rush hour as the Moto will be the only way to get through the traffic (the pavement is another lane to a Moto).

The one thing that can slow this zippy little traffic bypass, is knowing where to go. If you say to a Motodup driver the name of a street, landmark, restaurant or bar it is almost certain he will respond with ‘I know. I know.’ This is often said even before you finish saying your intended destination. So always ensure you really know where you are going. Moto drivers often work part time and are likely to have less knowledge of the city streets and English than Tuk Tuk drivers (who may have a smidgen more).

If you are new to motorcycles or indeed Asia, then please be aware of the exhaust pipe. If you are unaware where the pipe is and step off the bike, you risk scolding your leg with a huge scar that takes months to heal. So just notice what side the exhaust is on and be careful when getting on and off the bike.

The Moto will usually set you back between 3000 riel to $1.50. I will usually just always give a dollar unless it seemed a bit of a tougher ride that day. I am also a 110 kilo Scotsman so he is always going to be working hard with me!

The infamous Tuk Tuk. It is as synonymous with South East Asia as spicy foods and seedy old British men in oversized Hawaiian shirts. No matter how many years of using Tuk Tuks you have, I don’t think the novelty ever really wears off. It is wonderful and it is especially wonderful cramming every single one of your friends into one while it crawls along to 51 st.

Needless to say, getting a Tuk Tuk in Phnom Penh is not difficult. They are everywhere and you will likely be sick of being asked if you need one. Tuk Tuk drivers will not necessarily know where they are going but are usually helpful and try their best. If you are new to the city, then please be patient. It is frustrating when you need to get somewhere and the driver is lost trying to find a place that he claimed he knew. Although many of these drivers come from outside of Phnom Penh and are just trying to make a living while still learning the maze of streets that make up this city.

Tuk Tuks will set you back between $2-$4 around the city and more if you are leaving the city limits or heading to the airport. With Tuk Tuks, unless you are a seasoned Cambodian commuter with a little bit of Khmer it is best to negotiate the price with the driver first. Learning numbers in Khmer will always help reduce the price.

The Cyclo for a long time was one of the main ways of getting across Phnom Penh. Although now these charming little throwbacks of transportation have been almost eradicated by the Tuk Tuk and Moto.

They are now mostly a treat for tourists and are a lovely way to take in the city on a leisurely trip through the main city highlights. Expect to pay between $1-$3 and make sure you negotiate while outside the more expensive hotels and tourist areas.

These water taxis pronounced ‘outboor’ can be found throughout the country and are a great way to see the majestic waterways of the Tonle Sap and Mekong. These fibreglass boats  usually possess a slight 15HP or 40HP engine,and can carry around 6 people. The more adventurous commuter can also find the long tail rocket boat getting you to some smaller villages, in a nifty and most fun and slightly terrifying way. In Phnom Penh, just head to the riverside to see what your water taxi options are.

Busses are becoming more popular with students in the city but still remain an alien vessel of transport to any tourists or expats. The busses operate in 3 lines throughout the city:

Line 01 was the first Line established as part of the Phnom Penh bus rapid transit network.

Line 02 serves the western side along Mao Tse Tung Boulevard, going to Ta Khmao, the capital of the Kandal Province.This line terminates at The Night Market on Sisowath Quay. This line does not take you to Choeung Ek killing fields, as some sources claim. If you mention the killing fields the driver will tell you not to get on.

These lines are also known as A,B and C.

Until very recently, taxis were a rare site in Phnom Penh. They are now becoming much more common. Taxis are often not much more expensive than Tuk Tuks, although they are slower and have more of an impact on congestion and pollution. So I still do not quite see the point.

Ride sharing apps such as Uber and Grab have not yet broken into the Cambodian market. Although this is likely to change in the very near future. A local run equivalent by the name of Exnet Taxi Cambodia has however beat them to it. This is the first app of its kind in the city. Time will tell if it will fully take off in this congested beauty of a city.

It’s FRIDAY! Here’s Your Must-See Guide to the Weekend Ahead
HAPPY NEW YEAR from WHAT’S ON PHNOM PENH!