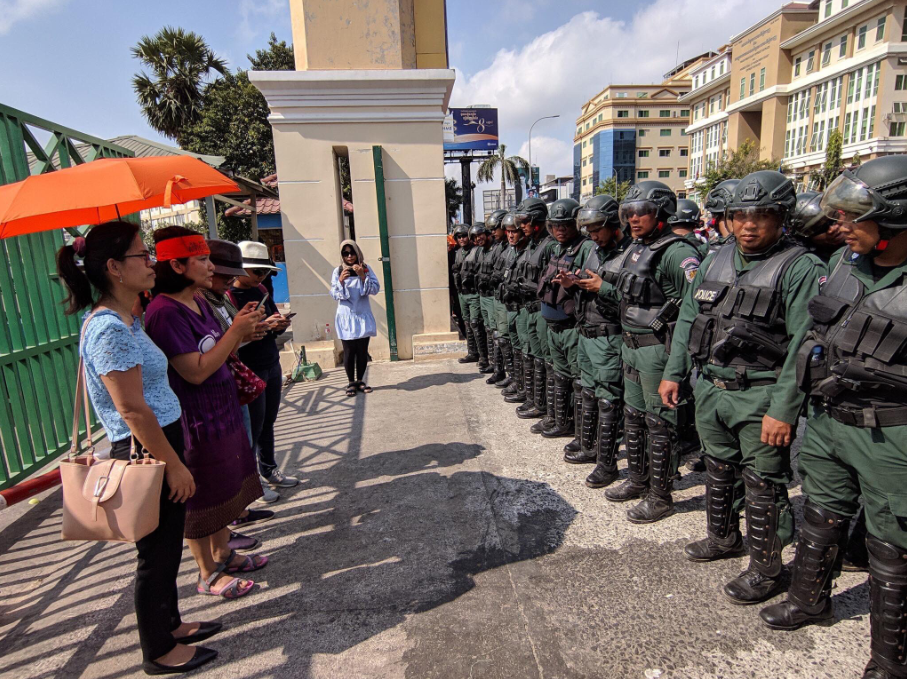 Over the International Day Women’s Day weekend, bars, cafes, art spaces and performance venues across Phnom Penh were bursting with women and men, coming together to share, discuss and celebrate International Women’s Day (IWD) and what it was to be a woman in Cambodia and the world in 2019.

There were Nerd Night talks on Monday talking about marriage and the patriarchy, panel discussions featuring female journalists discussing their experiences working in the media on Thursday, and bars holding celebrations with proceeds going to NGOs empowering women and girls throughout.

All were uninhibited and uninterrupted.

But when over 400 women, mostly from rural communities, garment factories, unions and civil society organisations gathered at Olympic Stadium for the Women’s Day March on Friday, they were met by riot police and blocked gates.

Chak Sopheap, executive director of Cambodian Center for Human Rights (CCHR), was on the ground at the march on Friday, witnessing marchers being blocked inside the stadium by Phnom Penh Municipal security forces as they attempted to deliver a petition to the Council of Ministers, with some women being pushed as they attempted to get past the gates security forces used to shut the marchers in.

“On Women’s Day, Cambodians were denied their right to freedom of assembly and expression,” she told What’s On Phnom Penh by email.

“By restricting their activity, the government is sending a negative message about its commitment to women’s rights.”

The petition set out seven demands aimed at reducing gender inequality and violence against women, including domestic violence shelters for women and to end sexual harassment in the workforce.

The marchers requested permission to hold the event in the days leading up to IWD, but were refused by City Hall, citing public order and safety concerns, a general catchall frequently used to limit groups from assembling.

Sopheap noted City Hall’s actions on Friday flew in the face of the rights enshrined in Cambodia’s constitution.

“Protests and marches are an inherent part of the right to freedom of assembly, a fundamental human right which is strictly protected by the Cambodian constitution,” she said.

“(It is) a right which must be strictly protected to ensure that marginalized people’s voices are heard.”

The petition was eventually accepted by authorities, who are promising they will deliver it to the Council of Ministers today (Wednesday).

Social influencer and feminist vlogger Catherine V Harry said it was not surprising the marchers were blocked, given the current political climate in Cambodia, noting the lack of female representation.

“Even though women are the majority in terms of number in Cambodia, we are still the minority,” she said.

“Because there aren’t many female representatives watching out for other women, issues that we are facing aren’t being prioritized as they should be compared to other issues that directly affect those in the position of power.”

Sopheap urged authorities to work with civil society to improve the lives and livelihoods of women and girls across the country.

“Rather than silencing critical voices, the government should view civil society in Cambodia as a partner,” she said.

According to local right’s based NGO, LICADHO, authorities attempted to block various women’s day events in Tbong Khmum and Kampong Speu provinces, but were eventually able to proceed.

Shauna O’Mahony, founder of feminist network Phnom Fem Fest noted while some of the more expat-oriented events were designed to commercially take advantage of the IWD celebrations, the key messages of equality gave them legitimacy.

“Some of these events are often entirely commercial under the guise of ‘Feminism’ and some are pure grassroots,” she said.

“But honestly, as long as the right message of female empowerment is circulated, I’m not too concerned about the underlying agenda.”

CCHR and LICADHO released a statement on Friday acknowledging the government’s steps in setting up its first consultation meeting with civil society groups to come up with an action plan to tackle gender based violence, but noted past policies failed to commit government funding, relying on NGOs, the UN and foreign aid to foot the bill for basic services and programs.

“We urge the Royal Government of Cambodia to recognize and include Women Human Rights Defender’s needs and rights in the new action plans on gender equality and preventing violence against women,” the statement said.

Harry said noted there was a long way to go before Cambodia could see successful IWD march’s realized, calling for greater collective action and for more women in leadership positions.

“Unity is important. The louder and more united we are, the more power we bring to the movement,” she said.