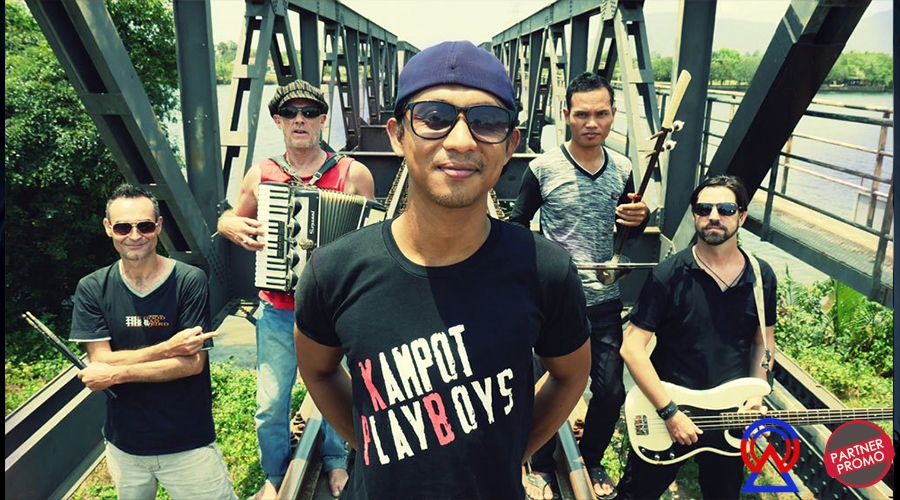 Blending Khmer and Western influences, rock, folk and punk styles, and mixing guitars and drums with accordions and a traditional tro, The Kampot Playboys’ unmistakable sound and electrifying live performances have elevated them to legends of the Cambodian music scene. Now, they’re set to launch Garuda, their brand new album, at Duplex in Phnom Penh.

Who Are The Kampot Playboys?

The group, which formed in 2011 and evolved from a series of jam sessions in Kampot, is made up of charismatic and frequently shirtless frontman Chiet Ukham on vocals and guitar, Englishman Mark Chattaway on vocals and bass, the Cambodian Nget “Flying Tro” on traditional Khmer Tro sau, Lee Chapman (also shirtless) on drums, occasionally Conrad Keely on guitar and  Kev ‘Wild Colonial Boy’ Selby on accordion. It sounds like a mad combination, and it is… but it works. These boys know how to get an audience jumping.

“The different musical styles have helped add to the sound” says Chattaway. “ Someone once described us as the Khmer Pogues!”

Long awaited by fans, the album went into production in May last year with the help of 60 Road Studios and the amazing mixing skills of Jason Shaw. The Playboys were keen to make sure it captured the raw energy of the live performances that have cemented their popularity across the country.

The Duplex launch party, in conjunction with Cambodia Beer, kicks off at 9pm this Saturday. Expect a packed house, a sweaty, buzzing dance floor, and a lot of calls for moi tiet.

Just How Amazing Is The 2Pangea Buffet?
Viva La Colours’ Breathtaking Stunts Has Audience On the Edge of Their Seats