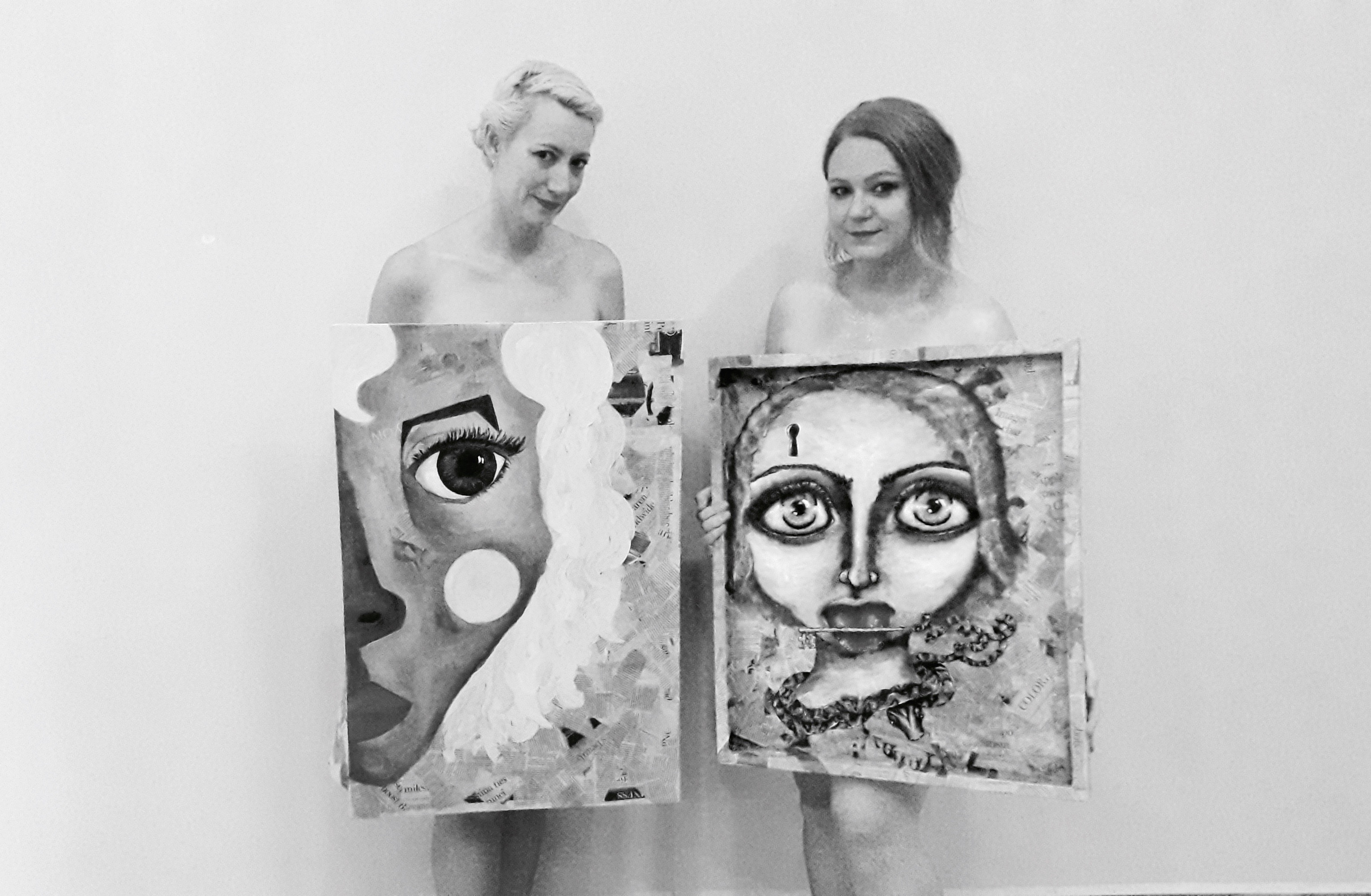 Life in Phnom Penh is one of giddy heights and dizzy lows. For those of us that make it our home, it can offer either a portal to new opportunities and adventures or an abyss of vice and disillusionment.

In their latest shared exhibition, which opened last night at Cloud, Marika Els and Emily Marques draw partly on life in Phnom Penh for inspiration, and their work capture this contrasts and tensions between stability, instability and movement.

Using acrylic on canvas, on papier-mâché, and pieces playing with three-dimensional elements, the pair have described My Portal, My Abyss as peeling back their inner psyches, inspired not so much by Phnom Penh as a city, but the people that inhabit it.

“People come and go, but the experience never leaves and becomes embedded in whatever I think, feel and do,” Els explained.

“For me, my abstract pieces rely heavily on my emotions; sometimes that is influenced when someone l love leaves Cambodia, sometimes it feels like life is changing and I have no control over it,” agreed Marques.

“Other times I am reminded that the world is beautiful and I want to capture at least a small element of that beauty.”

While the pair didn’t collaborate directly throughout the creative process, they each drew inspiration from each other, inspired by their contrasting choices of artistic mediums and styles.

“It is fun to see how vastly different our works are even though we both worked with the concept of My Portal, My Abyss,” Els said.

Els, who uses papier-mâché as her medium of choice, said this helped give exhibition have a greater sense of cohesion.

“I wouldn’t say we exactly referenced each other’s work per se, but we did offer input and discuss the concepts behind each piece; we were very aware of what the other was doing,” she said.

“It is up to the viewers to determine the level of connection,” Marques said.

Both artists are regular features of the Phnom Penh creative art scene. US-born Marques has had work featured in the Afloat exhibition at Plantation Resort and Spa, and other pieces are currently displayed at KBach Gallery’s Second Anniversary show. She is also heavily involved in theatre group the Phnom Penh Players.

“Overall, I have loved every minute of it and I intend to be immersed in the art realm for the rest of my life,” she said.

Meanwhile this is El’s second exhibition at Cloud, following the success of And Then I Lost My Mind in January. Her work appears on walls around the city, including Seabird’s Place on Street 410 and The Den on Bassac Lane. She has held several exhibitions of her work in her home country of South Africa.

While the pair hail from opposite ends of the Earth, it was their contrasts of light and dark and movement that they want to highlight in their exhibition. Their work aims to act as as visual representation of how they make sense of and interpret the ever-changing world around them.

“My paintings tend to veer towards the dark side, but it is in a search for light,” Els said.

“My Portal, My Abyss shows the result of the portals that the act of creating creates for me – to escape, deal with and express my reality.”

My Portal, My Abyss runs until April 25 at Cloud, St 9