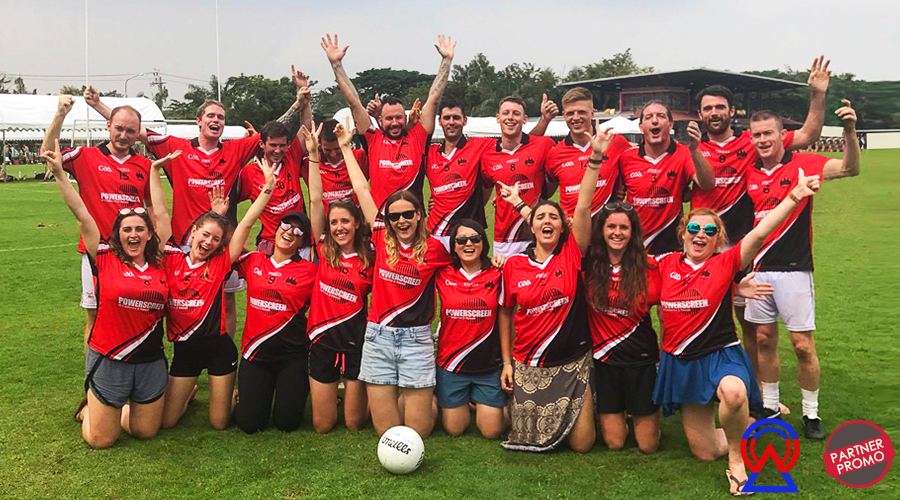 This weekend sees teams from Cambodia, Singapore, Vietnam and Thailand descend on the ISPP for a massive GAA competition hosted by Cairde Khmer. Entry is totally free and there are beer and burgers on offer all day, plus a live DJ to get you pumped for the games.

If you’re not familiar with either of these, Gaelic football is a kind of muddy, aggressive cross between rugby and football, and hurling is an ancient Irish sport that’s basically a more rugged version of hockey or lacrosse. The important thing is that they’re both great fun to watch (and play)!

Who Are Cairde Khmer?

Cambodia’s first and only GAA club is a brand spanking new addition to the Kingdom’s competitive sport scene and is already making waves across the region.

Since its creation in October 2017, the club has built up a membership that spans Phnom Penh and Siem Reap, includes men’s and women’s teams, and includes players from eight nationalities (Irish, Cambodian, English, American, Canadian, French, Swedish and Japanese).

It also put in a strong performance at the Asian Gaelic games in November, with the men’s team getting all the way to the semi-finals. Not bad for a team that only formed a month before!

Cairde Khmer is sponsored by SCOOP Foundation, an Irish education and community development charity working in Cambodia since 2008, and Mad Monkey, Southeast Asia’s best-loved backpacker hostel chain and a socially responsible employer that supports development projects in all the communities it works in.

Get involved! Phnom Penh training takes place on Wednesday evenings from 7pm-8pm at Boeung Keng Kong Primary School (Ponhea Hok School) on St 380. The entrance is next to BKK Market, opposite Blue Pumpkin – check out the map here.

Or, if you’re up in Siem Reap, head to Lion Soccer Club, just off Sok San Road, on Thursdays or Sundays at 6pm. More details here.

What to Expect on Saturday

Raucous crowds, a boozy afterparty and plenty of craic. Whether you’re curious about the sport or considering joining the club yourself, this is a great opportunity to cheer on the country’s first and only GAA club… and sound out whether either Gaelic football or hurling could be the game for you.