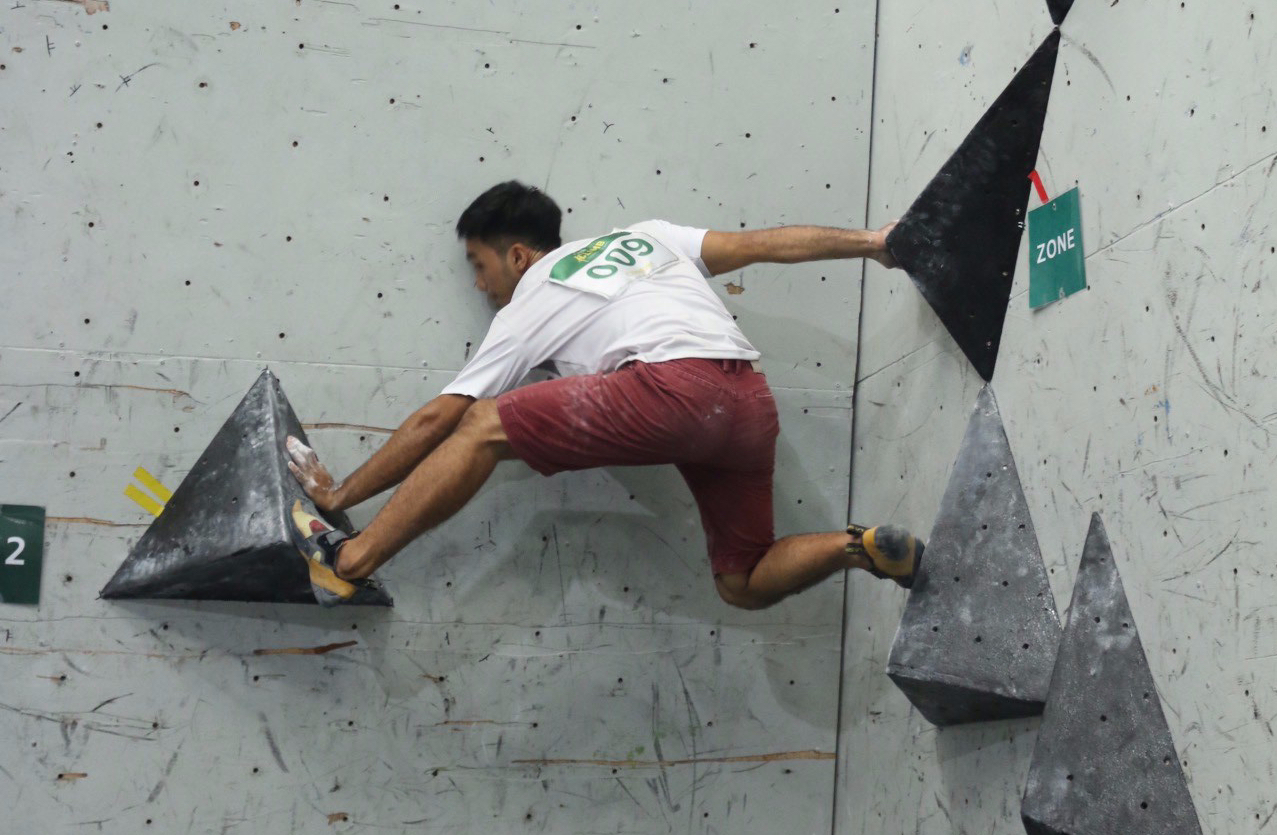 Read this in Khmer >

Rock climbers of all ages from around Cambodia descended on Phnom Penh at the weekend for the third annual Lotus Cup climbing competition at Phnom Climb.

Over a hundred competitors vied to win in all three categories: bouldering, lead climbing and speed climbing – and for Cambodian climbers, the chance to represent the national team at the Asian Championships in Indonesia in November. The winners of the youth competition will go to the youth edition in China.

This year’s adult winners, Sor Seyha and Yin Pisey, are already members of the national team. They represented the Kingdom, along with fellow teammate and Lotus Cup competitor, Cho Channy, last year at the Asian Championships in Japan.

“Well, that is the first time for Cambodia to join a big competition like that. So we didn’t pass the qualification, but we almost got to the top [of the bouldering route],” says Channy of last year’s showing.

“We were one of the last, but not the very last, which was also good,” adds Pisey. “We beat some of the Philippines’ climbers. But we didn’t pass the qualifications. The routes were too hard.”

But it did give the climbers a glimpse of what they will be facing in terms of international competition – and what to strive towards. “I’ve only been climbing for only three years, so we cannot compare our national team to the Japanese team who have been there for more than forty or fifty years already. On the big stage of Asian Championships, we just wish to do better than we did last year,” says Pisey, adding, “And we’ll meet world champions there. And to see them climb live – it’s very motivational.”

Rock climbing was introduced to Cambodia in 2008 when a Japanese NGO called Angkor Climbers Net opened a gym in Siem Reap. The sport has been gaining a foothold in the nation during the last decade, especially after the formation of the Cambodia Climbing Federation which, in turn, led to the creation of the national team two years ago. The national team already has a sponsor, the Japanese company Taica, that pays for them to attend competitions.

“When we joined the Asian Championship in Japan, they were so happy. It’s the first time for Cambodia to join the competition,” says Channy of the sponsors. “Like win or lose, they’re still happy because now at least they know – we have rock climbers in Cambodia.”

“Just being on the national team just gives me more motivation to climb. And also it’s better to have somebody to compete with,” says Pisey. “Because, now there are many more strong climbers, it keeps you motivated. So you try harder each time at the competition.”

Still, the sport’s nascent state in the nation means members of the Cambodian team have more hurdles to overcome to become competitive globally. Of last year’s showing at the Asian Championships, Pisey says, “those climbers, the Japanese climbers, have climbed since they were five or six. And they have everything they wish for, for training. While us, we have nothing. We just have the wall and climb by ourselves. There are coaches in Siem Reap, but they only climb once a week on Sunday. In Phnom Penh, there are no coaches.”

Having a coach is instrumental to improving one’s skills, says Seyha: “Right now we train by ourselves. We don’t have a coach or trainers. If we had a coach, he’d push us more.”

But they’re not downtrodden by this; these climbers know that it will take time to win the Asian Championship, the World Cup or the Olympics – at which Sport Climbing will debut as an event in Tokyo 2020. Says Pisey: “It’s our first generation to show the world that climbing exists in Cambodia. So it doesn’t matter that we can win them; we already know the results. We cannot compete with those climbers. But it’s just to put on stage that Cambodia is also there.”

She adds, “But we hope for the next generation that we can beat those guys.”

Spread over two days, the Lotus Cup followed the rules governing the newly formed Olympics Sport Climbing category. For bouldering and lead climbing, each climber has four minutes to get to the top of each run, with those who make it to the top fastest winning the best score. But the competitors are not allowed to watch each other climb; instead they each get two minutes to look at the route beforehand (and in bouldering, they’re allowed to touch just the starting hold) to figure out the best possible strategy, and then they are sequestered until it’s their turn to climb.

“And so for the audience, it’s really exciting, because they’ve already seen someone else try, and someone else will come out and try completely differently. So it’s a really fun sport to watch,” says Edward Anderson, organiser of this year’s event.

Competition was tight this year between the top climbers. Seyha and Channy, who always take turns on the winner’s podium, were split between speed and lead climbing and bouldering, respectively. For the women’s division, Saturday night was an anxious night as the two top climbers, Pisey and Meas Nich, had each won a category that day and were awaiting the outcome of Sunday’s bouldering round to see who would be the ultimate victor.

The competition may have also foreshadowed the rise of the next generation. Of the 102 competitors, roughly 70% were under the age of 18 – and every single one was Cambodian.