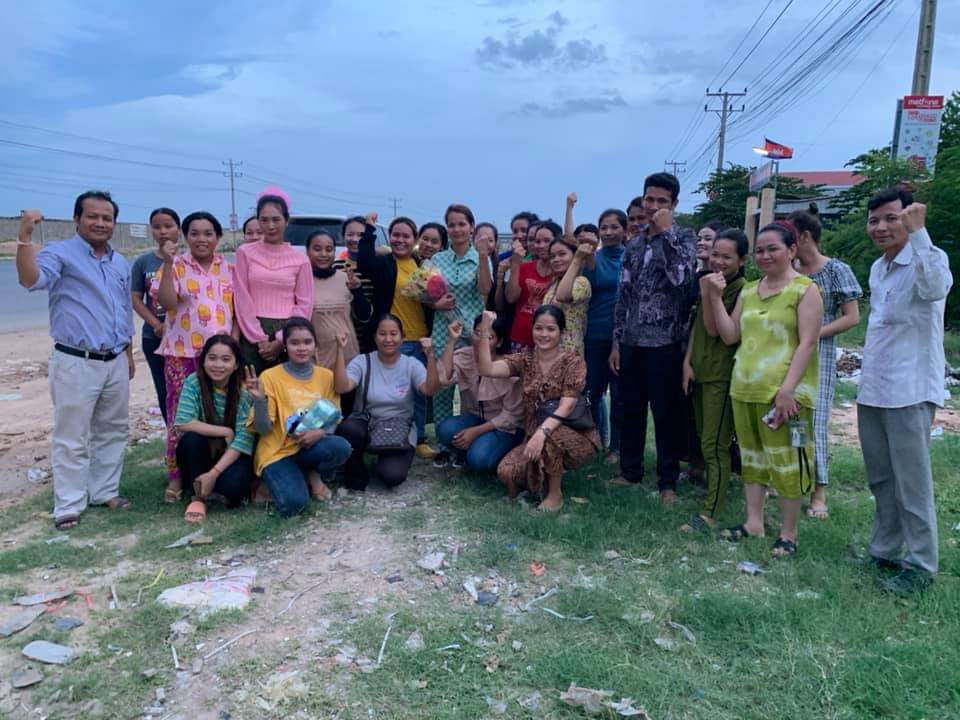 This morning, Ms. Soy Sros, Collective Union of Movement of Workers (CUMW) local leader at the Superl factory in Phnom Penh, is getting up early, saying goodbye to her family and heading to her job as a seamstress at the handbag manufacturer.

She’ll be greeted by hundreds of her coworkers with smiles, congratulations and perhaps presents – for this is the first time she’ll have been to work since her arrest.

On Saturday, June 13, the Superl management signed an agreement with Soy Sros and CUMW president, Pav Sina, after a three-hour meeting at Dara Airports Hotel, to finally end her case, two and a half months after management had had her arrested for spreading “fake news”.

She is now able to return to work – which she needs to be able to support her mother and two children – and no longer has criminal charges hanging over her head. The management has agreed to pay her back wages, and both sides have agreed to not discriminate or retaliate against each other, but to “closely and honestly work together to build strong industrial relations and further improve working conditions” from now on, “paying more attention to deal with labor disputes or conflicts”.

While this amicable ending may be the beginning of a fruitful relationship between Cambodian workers and their employers, it did come at the expense of Soy Sros spending two months incarcerated. And the method of putting her there – claiming she spread “fake news” – is alarming in its efficacy of silencing a protesting voice.

Soy Sros shared her experience with What’s On Phnom Penh in the days after her release from jail, through the translation of CUMW Assistant President Preap Munysovann.

It all started, she said, on March 31 when the factory management announced that it would not be renewing contracts in April for a large number of workers at this handbag factory, including at least one pregnant lady. Soy Sros requested to speak with HR about the issue, but they refused to meet with her, saying that they said they didn’t have anything to discuss with the union or the workers.

She posted that evening about what had happened on Facebook, adding her understanding that the Ministry of Labor had said that laborers would not be fired because of Covid-19, which the Prime Minister had also said.

According to the Fair Labor Association, Cambodian law requires employers to receive government permission before suspending laborers and then must pay them 40% of the minimum wage for six months.

Her post was shared widely – so much so that her factory’s management called her in for a meeting the next day asking her to remove it and to publicly admit that it was “fake news”. She refused.

On April 2, the police came to the factory and arrested her because of a complaint made by the management that she was spreading “fake news”. The police refused to discuss her charges at the factory, but instead wanted her to come immediately to the police station to discuss her situation. When asked to recall how she was feeling at this point, she said that she was not afraid because she knew it was right to defend the workers’ rights.

Though this was the first time Soy Sros has ever been arrested, it was not her first encounter with intimidation. Before starting at Superl in 2017, she had worked at another factory in Kandal province and had been their labour leader for two years before fleeing for her and her family’s safety to Phnom Penh. The barrage of threats from “gangsters” and people connected to the powers that be of that special economic zone was so strong that her landlord evicted her family, fearing for their own safety.

Her situation at Superl has been notably different from the previous experience. The factory doesn’t have bad working conditions, she said, and while they have made some efforts to keep union representatives separate from workers (Soy Sros actually switched from the higher paying “line leader” position to her current one as a seamstress in order to be in direct, daily contact with the common worker), it hasn’t been as drastic as physically removing the union office from the premises or having members chased by gangsters.

And yet, from April 3 to May 28 she was held in detention. The judge detained her on penal codes 496, incitement to discriminate, and 494, existence of incitement (meaning sharing via writing to the public). Interestingly, she was not charged with violating the “fake news” directive which seemingly was the grounds of her arrest in the first place.

She said the conditions of the jail cell “were very bad”, noting that due to the large number of inmates, each person only had 50 cm sq. Her health started to suffer. She could not sleep well, and she worried about her family. With her incarcerated and not earning money, she didn’t know how they were living.

“I was smiling when I was released, but before that I was very sad,” said Soy Sros.

When she was discharged from jail, she was only charged with penal code 496, “discriminating”. Asked against whom she discriminated – or what discriminating meant in this context – neither Soy Sros nor Munysovann could say.

At this point, Soy Sros was in a tough position. She wanted to return to work so that she could start supporting her family again, but she still had a criminal charge hanging over her head. Both the factory and the union didn’t want her to return to work until the matter was settled, and the union had conditions for the settlement – namely the charges dropped, payment of lost wages and no retaliation.

Though the factory did suspend production from April 4 to May 10, all workers, including the ones she was concerned for on March 31, were brought back to the factory – all except Soy Sros.

Now, after the events of this weekend, she can join her coworkers in the line.

Soy Sros said that she feels proud that she got to defend workers’ rights and gives “many thanks to Pav Sina because he is a good leader who controlled the situation. He also taught her to work with her heart with the people, not just with contracts.”

Is it fake? Or discrimination?

While, again, it is very fortunate for all parties involved in this situation that they were able to come to an amicable conclusion, it still leaves unsettled questions: if she was arrested after being accused of spreading “fake news”, why was she held on different charges? And what does it mean to be charged with inciting discrimination?

Article 496 (incitement to discriminate) of the penal code says, “to discriminate, to be malicious or violent against a person or a group of persons because of their membership or nonmembership of a particular ethnicity, nationality, race or religion”.

“So this provision is only criminalising conduct that incites harm against a group of people because they are that class of people,” explained Tom Pearson, a US lawyer and former lecturer and administrator at a prominent university in Phnom Penh. If it’s a worker speaking out about practices of management, and not because that management is of a certain ethnicity, religion, etc., then it would fall under freedom of expression protected by the Cambodian constitution, he noted.

Article 494 addresses the manner of spreading the discrimination, by public speech, by writing or pictures displayed or distributed to the public, or via audiovisual communication to the public.

And here is a possible connection to the initial complaint made by Superl management of “fake news” – both the “fake news” directive and Article 494 can be used to target Facebook posts.

Facebook is the widest-read platform in the Kingdom, and messages posted therein have thus been heavily scrutinised by the authorities for anything that might cause “civil unrest”, be it from garment workers, anti-deforestation activists, or even a little-known rapper who’s song was reposted by exiled political opponent Sam Rainsy.

Initially created in the months before the 2018 election, the directive threatened those who posted “fake news” on websites and social media with a $1,000 fine and up to two years in prison.

While its original intent was to control what was said online about the political parties (namely, the ruling party) before the national election, the “fake news” directive has been used again in recent months during the Covid-19 outbreak, seemingly to check what’s said regarding the government’s response.

Human Rights Watch documented 30 cases between January and April 2020 in which people were charged with “incitement, conspiracy, incitement of military personnel to disobedience, and spreading false information or ‘fake news’” (emphasis added).

It would seem that the charges of incitement and spreading “fake news” have become conflated.

And though Soy Sros’ case has ended on a relatively positive note (again, she was held in jail for two months), the lack of clarity of what “incitement” or “fake news” actually mean under the rule of law – and when and how they can be used – means that others in this position may not be so fortunate.

Where to drink beer and talk weird (even if you’re socially distancing)
What’s On? Thearo!