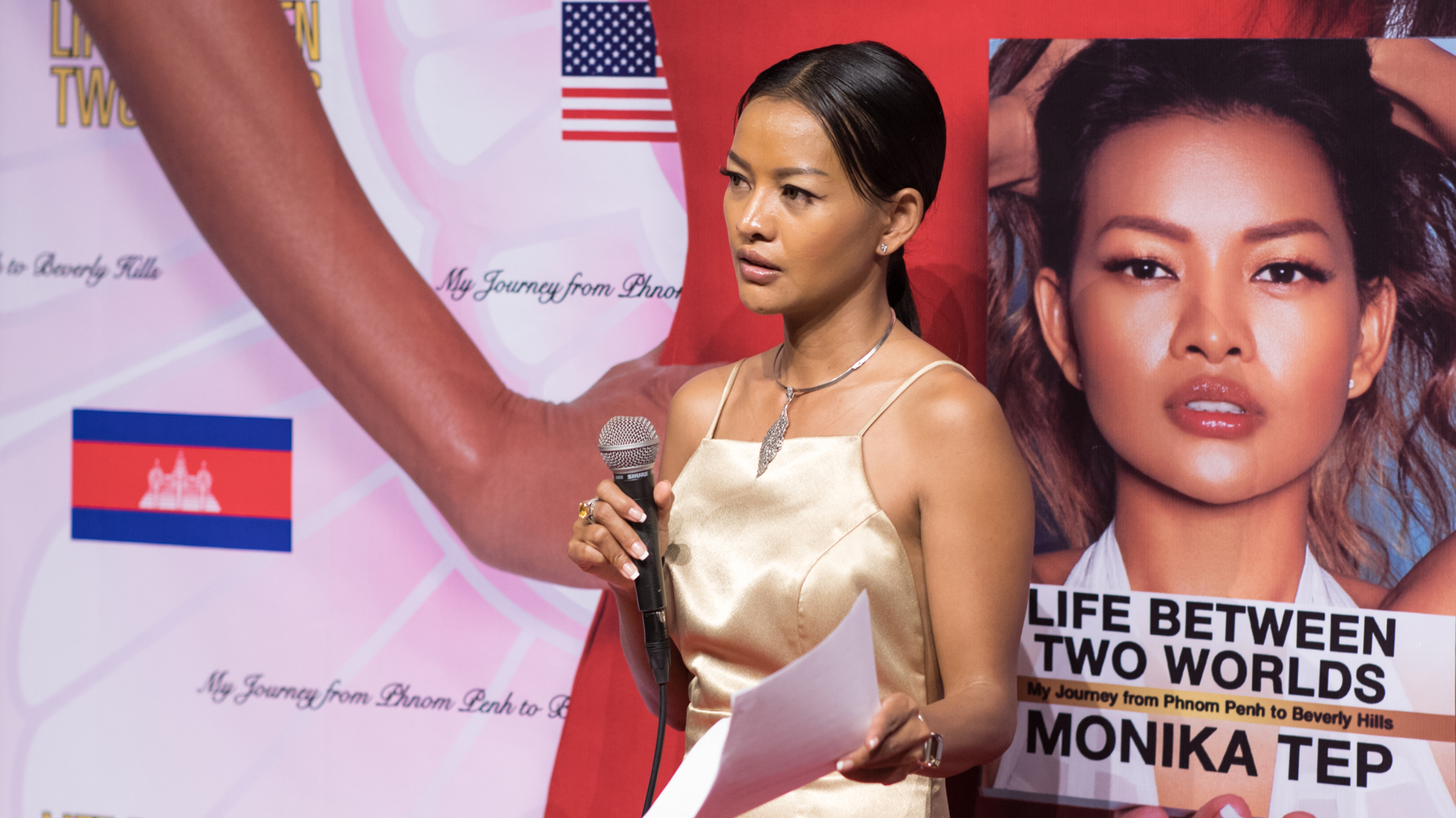 Monika Tep: From Phnom Penh to Beverly Hills and Back Again

“When I moved to America I discovered that Past, Present and Future are spelled differently,” says Monika Tep, her voice wavering ever so slightly as she addresses an audience of teary-eyed journalists, writers and friends who gathered for the launch of her memoir, Between Two Worlds.

The book, she explains, is a way to confront the past – to make sense of it – but also to show how even the most devastating events don’t dictate a person’s future. Monika knows this better than anyone; as she steps up to the microphone in the elegant rooftop bar, champagne glass in hand, wearing a glamorous satin dress she designed herself, there is little trace of the struggling former garment factory worker whose experiences of abuse, sexual assault and trafficking at one time almost destroyed her.

Barely into her thirties, Monika has survived a litany of family tragedies and almost unimaginable traumas. Her father died when she was a baby and her mother tried hard to support and stabilise her young family, first through entrepreneurship and then remarriage. A series of disasters pushed them deeper into poverty and hunger and the pressure proved too much – her mother succumbed to alcoholism and Monika was regularly, viciously beaten. By her early teens, desperate to escape, she moved to Phnom Penh with her sister and got a job in a garment factory, igniting a life-long love of fashion. The conditions were hideous, but things were looking up – she saved up enough to money to put herself through beauty school.

Instead of being a stepping stone to better things, though, both the beauty school and the jobs that followed brought Monika face-to-face with the worst side of Phnom Penh – including human trafficking and sexual violence. Aged 15, she was kidnapped and raped. Not long afterwards, she was tricked by a (female) boss into taking a business trip to Thailand, only to learn that she’d been sold to a man there. The chance to start over in Los Angeles opened up the opportunities to study, launch a successful modelling career and eventually open her own day spa business – but seedy underworlds and sexual predators lurk everywhere, especially when you’re a young model and actor, a long way from home. Between Two Worlds has more than its fair share of #MeToo stories. In the end, one too many bad experiences in the modelling industry made her decide to focus on opening her own business instead.

“I wrote the book to free myself,” says Monika, when we meet for this interview. “I’d been beating myself up for so long.”

Speaking out about sexual assault was the hardest thing she’s ever done, she says, but also her proudest achievement. It took years to summon the courage, especially having grown up in a conservative culture that judged, and sometimes still judges, rape victims harshly. To make matters worse – and even less possible to talk about – Monika was raped on a second occasion by a monk she trusted; an incident she was ultimately persuaded to leave out of the book, but which she says shook her religious faith to the core. The book talks frankly about the overwhelming feelings of shame and despair she was left grappling with, but also her fierce efforts to move beyond the trauma, building a successful, independent life for herself and pursuing her chosen career on her own terms. Ultimately, it’s a story of hope – and of triumph.

It’s not just herself that Monika has forgiven. Years ago – before she left for LA – her mother kicked the alcohol addiction and the family were reunited. In the book, Monika speaks warmly of the close bond they developed. Her mother, she says, also supported her through the darkest days of her own cocaine addiction and an attempted overdose – something Monika has also fought hard to put behind her. Meeting her mother and siblings at the launch, it’s obvious how proud they are of the person she’s become.

Monika Tep with her family on the red carpet at her book launch. Photo by Steve Porte

The challenges aren’t over for Monika Tep. The spa she worked so hard to open in Beverly Hills was forced to close during Covid-19 lockdowns and the industry shows no sign of recovering. Instead, she’s decided it’s time to return to Phnom Penh – a city she says has changed beyond recognition since she left 15 years ago – to open a brand-new Monika Day Spa. Her plan, essentially, is to create a real version of the beauty school training she was supposed to get in Phnom Penh all those years ago: she intends to offer (free) training to young people who want to become aestheticians, at the US/European standard she worked to in LA, with a view to working for her when they’re qualified.

In the meantime, she hopes her story will inspire others who feel trapped by their circumstances to follow their dreams, to hold on to hope, and to have the courage to speak up. I ask her what advice she’d give tell her teenage self, if she could. “I’d say, you’re not perfect, but you’re enough,” she says, with characteristic humility. “That you can look back at your past, but don’t stare at it too long”.

You can order a copy of Between Two Worlds from Monika’s Facebook Page, here.

From Disability to Visibility: “We can do everything any other person can do”
Join the Circus This Weekend to Help them Break a World Record