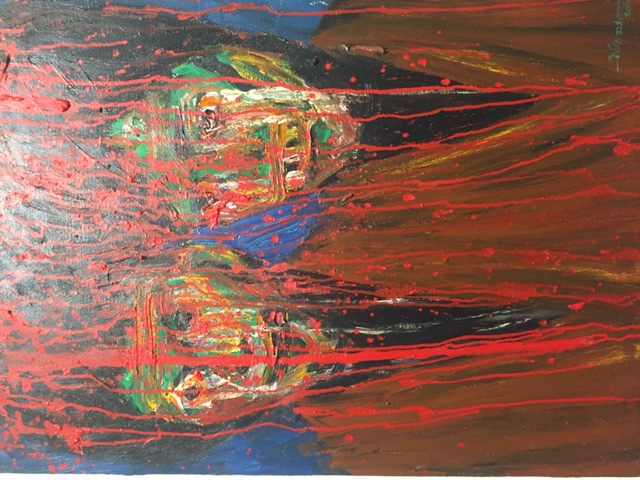 In this series of profound, confessional paintings, Battambang artist Nget Chanpenh leads the viewer through his 18-month struggle with addiction and despair.

A young, sallow man gazes dispassionately from the canvas, his eyes lightly ringed with red. This is the moment that Nget Chanpenh, a depressed artist grappling with his internal demons, first tried crystal meth (known as ice). Here, he recalls, he was unimpressed, but as the months went by, the addiction would come to dominate his life.

“For 18 months my brain was under attack from crystal meth and I did many things mechanically, unconsciously. Most of the time I did not know what I was doing or why. I was under the influence of a force stronger than myself,” explains Nget.

“I only thought about ice as something to soothe my eternal grief, and that was sufficient for me to continue.”

Waiting for the Ice Melt – his “pictoral diary” – illustrates this mental chaos, confusion and compulsion to powerful effect.

In Dilemma, the shadowy male figure turns in on himself, encircled by bold rings of colour, his crossed ankles and yellow twists of cigarette smoke mimicking each other – trapping him in a spiral. Drinking Party Boiling Over is a primal festival of ochre red, yellow and blue, the dancers leaping like figures in cave paintings – but out of control, bewildered by their war dance. In Drowned, dislocated hands reach up from the yellow depths, the blind leading the blind; the drowning clutching at the drowned.

The series also chronicles the gradual annihilation of Nget’s identity by the force of his addiction – vacant, eviscerated faces trickle away in streams of colour in My Way and Blood, Sweat and Tears; they burn and melt in United in the Hell; in Brainstorming, brains unravel into red strings of empty words, leaving their toothless heads shrivelled and hollow.

At the same time, there are traces of resilience. Drawing on images of Buddhist stupas and Classical Khmer architecture, Still Alive’s stone structures are weakened and crumbling, but still standing. The final canvas in the collection, A Glimmer of Hope, gathers tiny symbols of beauty and release: a sliver of moon, a child escaping through a gate. The figure isn’t watching them – you sense he isn’t ready – but his future is there, on the peripheries, and life has begun to begun to creep back in.