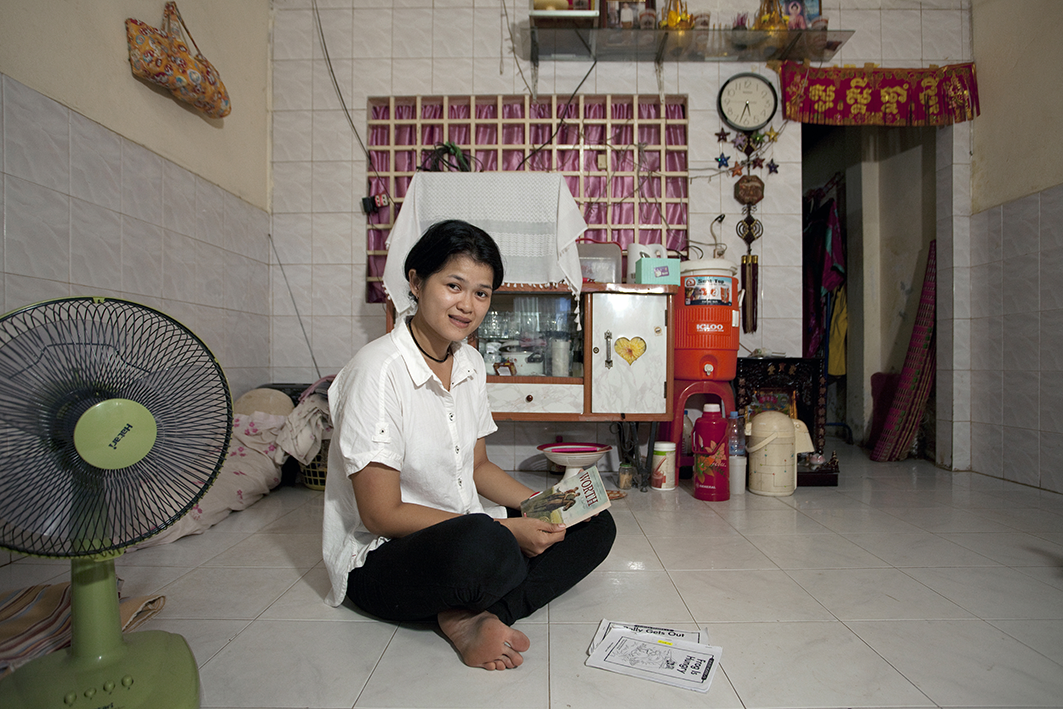 A new exhibition of photographs by Astrid Schulz is now showing at META HOUSE, painting a poignant picture of private lives in Phnom Penh.

Taken over six months, the photographs depict people from all strands of life – rich and poor, young and old, in every corner of the city – working or relaxing inside their homes, alongside captions detailing their personal stories.

Astrid Schulz talks with a young architect, the subject of one of her photographs.

Together, they weave a narrative of a city anxious for prosperity but choked by its own development: communities disintegrating as the land around them is snapped up for luxury flats, bewildered residents alienated by the gentrification of their neighbourhoods, young people striving to cope with soaring rents – and, at the same time, an ambitious, rising middle class, and broke but resilient entrepreneurs carving out a life amid the chaos.

Many of the images are deeply moving, using light and space to powerful effect to emphasise the loneliness of an old woman left behind, for example; or capturing the quiet pride of artists and artisans at work in home studios and workshops.

Less compelling are the captions, which don’t do full justice to the stories that Schulz passionately relates about her subjects in person.

This may be because the project began as a study of how Phnom Penh’s residents interact with their environment, appearing in Michael Waibel’s new book, Phnom Penh: Capital City. But, Schultz explains, the research format yielded repetitive, impersonal answers (about the traffic, the land grabs, development in general), and so she switched to personal questions about her interviewees’ passions, interests and hopes.

The resulting captions are a somewhat awkward mix of the two – third person overviews of the subjects’ lives, with hints of their personalities and perspectives.

Given the theme of the photographs – going beyond closed doors, into residents’ private spaces – it seems strange not to hear each story told in the their own words, but the intimate glimpses that Astrid does provide are fascinating, and sometimes heart breaking.

Hun Sarath, a celebrated singer before the war, is pictured in her flat in the iconic White Building – now due for demolition, implicitly destroying her last link to Phnom Penh’s Golden Age. Two motorbike-obsessed teenagers shown fixing up a 1980s Honda enthusiastically discuss buying it “dead” for $25 and selling it on for $100. The elderly owner of a statue shop near the Royal Palace explains that the never cared for domestic duties, and finally found her calling at 71 when she had a chance to sculpt marble for the first time.

In a city that sometimes seems to evolve overnight, Schulz’s photographs offer a thoughtful, humanising view into the lives caught up in Cambodia’s runaway development, and the dreams, fears and social upheaval engendered along the way.

Phnom Penh: Capital City, by Michael Waibel, is on sale at Monument Books for $24.

Visitors at the exhibition opening on 16th March