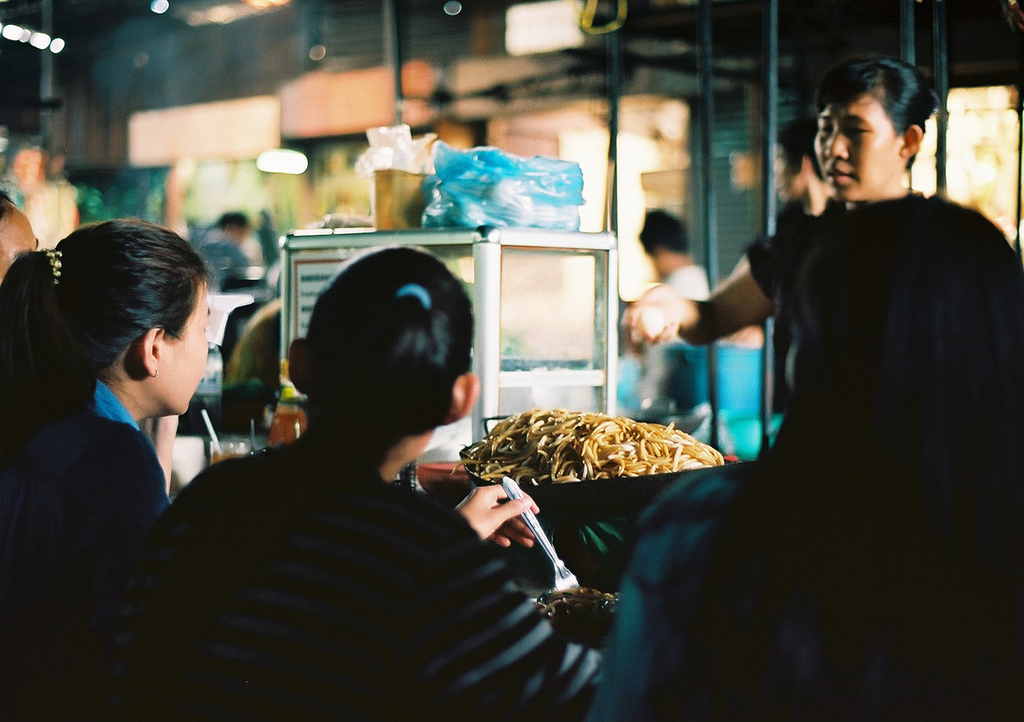 Compared to neighbouring Thailand and Vietnam, Cambodian street food gets a bad rap. But look beyond the identikit fried chicken stands and those cockles left out in the sun all day, and you can find some delicious gems at a fraction of restaurant prices.

On a sweltering day in the city, nothing beats an ice cold cup of delicious Cambodian coffee stirred through with condensed milk. Proper Mondulkiri coffee is unbelievably delicious – hot or cold, black or white, it blows a $3.50 barista latte right out of the water. But mixed with creamy, sugary condensed milk, it’s practically dessert.

These flattened rice-dough patties are stuffed with chives and sometimes other greens, like spinach, and fried up in huge pans. You see them all over the city, especially in the markets. They’re either round or square, and either way they’re delicious – especially with a dollop of chilli sauce. They’re pretty oily, though, so if you’re worried about the fat content, keep an eye out for the baked equivalent, Num Crok. Oh, and bear in mind that the broth they’re often served with is probably made with boiled animal bones, so if you’re a veggie, you might want to go without.

This satisfying and very tasty Khmer classic consists of (surprise!) noodles in a flavoursome broth-like soup. Kuy Teav can be prepared with vegetables, egg and/or a variety of meats, and makes for an extremely popular and satisfying breakfast. Again, though, if you’re vegetarian, you might want to check that the broth is, too.

Anything Grilled on a Stick

Cambodians love a bit of barbequed anything and stalls abound selling skewered pork, beef, squid and a variety of other meats and seafood. The most popular of these are the beef skewers, which are marinated in a fragrant Kroeung (“base” paste) and served in a baguette. Kroeng recipes for the skewers vary, but typically involve any combination of ground-up kaffir lime leaves, ginger, galangal, garlic, lemongrass, fish sauce, turmeric, sugar and thyme.

These simple, tiny parcels are super cheap and make a great snack when you’re out and about. Essentially, they’re just chunks of ground-up fish made into a paste, wrapped in pieces of banana leaf and grilled on the barbeque. Unlike Otak Otak (the Indonesian equivalent), they aren’t usually mixed with many spices though, so they taste best with a little chilli or fish sauce.

Fried noodles – whether with greens, veggies, tofu, chicken, shrimp and/or pork – are a simple and dependable staple. Depending on where you get them from, the actual noodles might be short and fat, flat and yellow or instant-ramen style, and if you’re lucky, you might get a fried egg or deep-fried garlic on top. Also, if you’ve just moved to the city and are wondering what on earth that clip-clopping noise is that you hear late at night in the street… that’s nocturnal noodle-sellers advertising their wares. Perfect for a midnight snack.

A Cambodian take on a Chinese classic, these filling, hot steamed buns are sold everywhere, stuffed with pork and egg. Don’t forget to peel the paper off the bottom before you eat them, though!

No, really – Cambodian fruit is amazing. Local favourites include under-ripe mango wedges dipped in salt and chilli and pickled papaya, guava, cucumber and apple, but you can also pick up fantastic fresh produce extremely cheaply on market stalls, especially if you stick to what’s in season or locally grown. Delicious, readily available fruits include rambutan, mangosteen, pomelo, pomegranate, papaya, pineapple, durian (hold your nose) and watermelon, and at the right time of year – usually around April – Cambodian mangos are so divinely tasty you won’t want to eat anything else.

Health food fanatics the world over go bonkers for coconut water, often paying crazy prices for a carton of the stuff. Here in Phnom Penh, for under a dollar, a machete-wielding grandmother will happily hack off the top of one for you and stick a straw straight in. It doesn’t get fresher, tastier or more refreshing than that!

Have we missed out your favourite street food snack? Have any recommendations for where to find the best street food in Phnom Penh? Let us know in the comments section below!