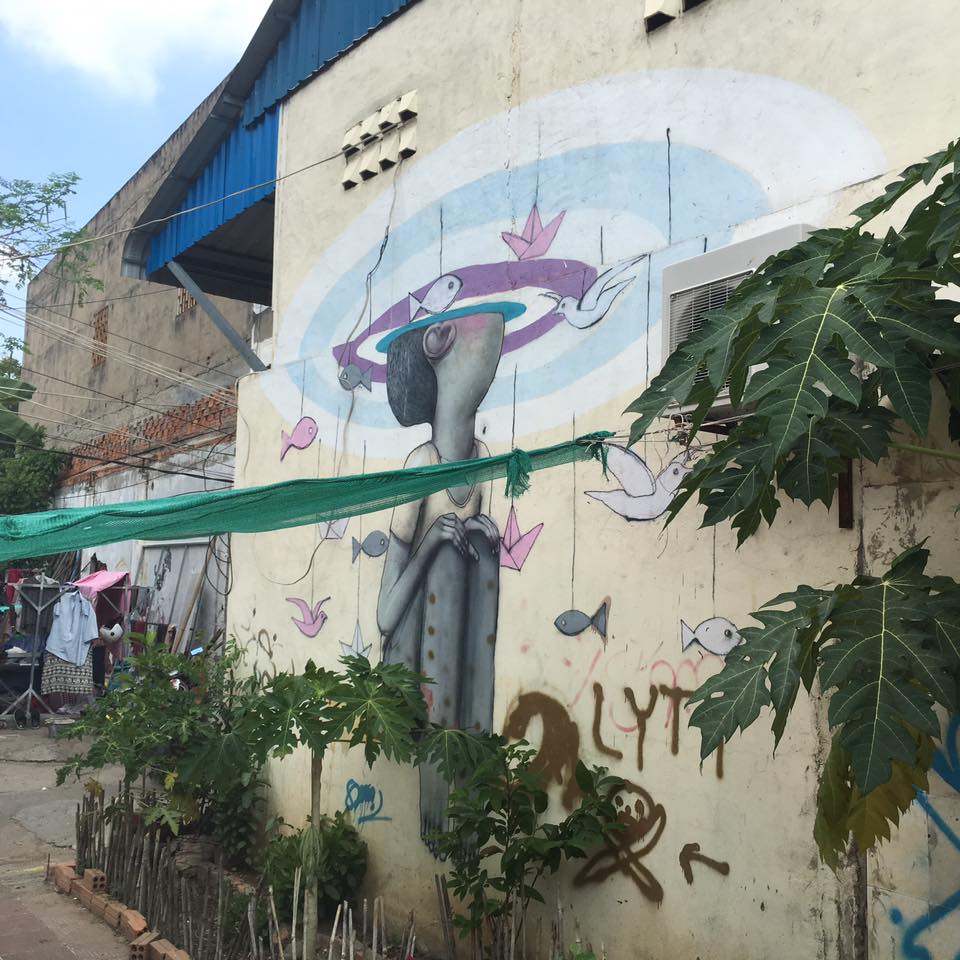 By day, 19-year old Phnom Penh natives David Myers (Davido) and Kimchean Koy (Koy) are architecture students at the prestigious American University of Phnom Penh by day. By night, they are up-and-coming graffiti artists, scaling buildings throughout lakeside and collaborating with street artists from across the globe.

Now, having finished their exams, the duo have launched a brand new Sunday morning graffiti tour of Phnom Penh, taking small groups on a journey through the capital’s hidden pockets of street art, and offering an introduction to the city’s modern art as a whole.

“What I love about street art is how it always changes. Nothing is permanent.”

The tour begins at 9am on Sunday Morning (don’t panic, you can always head there straight from Pontoon…) at the National Museum, where Koy and Davido have prearranged tuk-tuks for our small group of graffiti tour guinea pigs.  From here, we’re told, the graffiti tour will take us to notable graffiti spots as well as established galleries like Sa Sa Bassac, Kbach Gallery, Java Arts and Nowhere art studio. As the boys see it, for Phnom Penh’s creative crowd, the only distinction between “street art” and the more conventional variety is the location – and with so few dedicated galleries in Phnom Penh, some of the best work is delivered out on the street.

Of course, the bittersweet thing about art in public spaces is that it lacks permanence. Like many other places around the world, Graffiti in Phnom Penh is often covered by the authorities or painted over or developed in an unplanned collaboration with other artists. While this can be frustrating, it’s also what makes it special.

“What I love about street art is how it always changes. Nothing is permanent,” says Koy.

In the tuk-tuk to our first stop, Myers and Koy talk us through the general art scene in the city. Far from the archetypal cliche of a feckless teenage graffiti artists, these boys are true connoisseurs – thoughtful and eloquent about the styles and techniques, and deeply respectful of the communities whose spaces we visit.

What’s more, as active street artists themselves, Koy and Myers are well and truly involved in the scene, with an encyclopedic knowledge of where to find work by every famous artist and and up-to-date information on every twist, turn and trend. It’s clear that this tour is a living, breathing journey that will evolve each week as new pieces spring up – or are painted over.

“This tour is a living, breathing journey that will evolve each week as new pieces spring up – or are painted over.”

The first stop in our tour (which changes on a weekly basis) takes us to an easy-to-miss piece on the side of a residential apartment complex in Tonle Bassac, where the duo instantly start to explain the subtle nuances of spray-can technique. It’s clear these guys really know their stuff.

Davido also takes the opportunity to squash one of the more damaging misconceptions about street art in the city. He explains that artists typically ask the building owners or residents if they can paint on the walls – permission usually granted, if it adds some interest or beauty to often-unloved buildings – and rarely experience pushback from the authorities.

One famous exception, of course, is US artist David Choe’s giant mural of a seamstress (and resident of the building), painted on the side of the iconic White Building. Choe spent 8 hours a day for a full week completing the striking, impressive mural, but following a mix-up over permissions, it was painted over by city authorities. The white paint wasn’t thick enough to completely crush Choe’s efforts, though.

“Come and have a look at it when it’s been raining,” Koy says with a twinkle in his eye. “The artwork shines right through the paint.”

… Some of the city’s hidden secrets, it seems, are buried deeper than others.

While the new perspective on the city creates a whole new level of appreciation for Phnom Penh, it’s our supremely likable teenage tour guides that really make the trip.

It’s not just their vast knowledge of all things related to art and Phnom Penh, but also their incredible work ethic (Koy explains they often operate on 3 hours sleep) and focus on social responsibility.

Koy and Davido starting the tour with the noble aim of bringing Phnom Penh’s artistic and creative elements to the surface, and to engage their fellow Cambodians in particular with the art right under their noses. Despite the effort and time the boys are putting into this endeavour, they aren’t pocketing any of the cash, either. Instead, the profits will go to the NGOs Braveheart and the Cambodian Children’s Fund.

The pair also want to encourage more children to take up art as a tool of communication. Art is not usually taught in school in Cambodia, and where it is taught, it’s more about mastering specific techniques than expressing new ideas. As Davido explains, some of the profits will go “towards funding free tours for children who wouldn’t have the chance to experience it.”

“Some of the profits will go towards funding free tours for children who wouldn’t have the chance to experience it.”

Even for art-lover Davido, the traditional Khmer art scene felt too restrictive to offer many models of inspiration. For him, he says, it was Western abstract artists like Picasso that he admired the most in his formative years.

It hasn’t always been this way. Art played a vital role in Cambodia’s history, and was a core part of the curriculum in schools prior to the Khmer Rouge. But the artistic ecosystem has been slow to recover – and, short of formal canvases and exhibitions, young Cambodian artists increasingly use street art to experiment with new ideas.

In fact, it’s at the bohemian enclave of Boeung Kak “Lake” (the area still known as Lakeside, despite the lake itself being filled in several years ago), that the tour really comes alive. Davido explains that many people feel uncomfortable in this area, as it’s seen as “sketchy” – plagued with extreme poverty and drug addiction. As so often happens, the social deprivation created the conditions for the grassroots art scene to flourish.

“As so often happens, the social deprivation created the conditions for the grassroots art scene to flourish.”

Here, you can see an amazing array of pieces by street artists from around the world. Work from internationally acclaimed artists like Seth Globepainter and Alias 2.0 abounds, incorporating Khmer style nagas and other classic design elements with personal style and cultural references, splashed high across the sides of tenement blocks and crumbling houses. There are some incredible pieces here, including designs on the side of an orphanage, created in collaboration with the local community.

From rough and ready lakeside, it’s back to hipster central: a huge collaboration by Khmer and global street artists on St. 240 1/2, near ARTillery Cafe and La Familia. This vivid collection is a complete change of tone from the gritty underground feel of lakeside – the legacy of a major street art festival last year.

We finish up at the skate shop near Independence Monument, where the boys proudly show off a fitting piece of their own – a striking portrait of Ros Sereysothea, pop queen of Cambodia’s golden age, rendered in contemporary style.

In just a couple of hours, we’re left feeling that we’ve seen the city in a completely new light, the contrasting locations and styles telling a story of an underground creative movement that’s steadily gaining ground.

What’s more, the weekday versions of the tour will take visitors to the city’s first graffiti gallery (unfortunately, closed on our Sunday visit). It seems that this generation of Khmer artists are ready to come in from the cold and start making permanent pieces, too.

Want to book a tour? Drop Kimchean Koy or David Myers a message through Facebook!