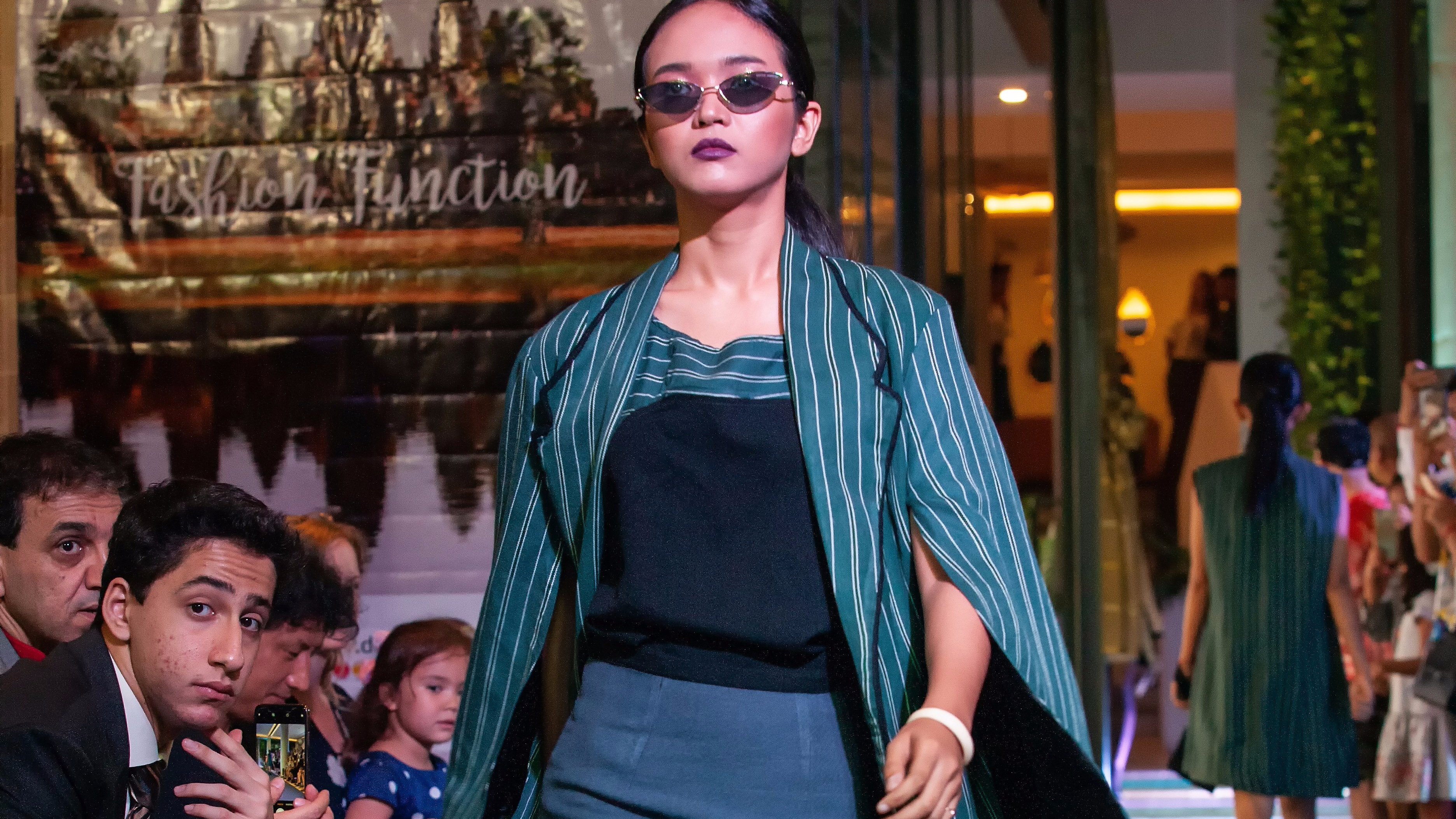 The lights flashed and eyes twinkled as Cambodian fashion design took the catwalk last Saturday at the MEDC Fashion Function. Students in the Modern Ethnic Design Center (MEDC) showed off their Autumn/Winter 2019/2020 collections to an audience of roughly 150, the results of six months of hard work. Of the twelve designers who showcased their talents on the runway at Penh House and Jungle Addition Hotel that night, five will be headed to Berlin in November to sell their clothing as part of the Bazaar Berlin .

“Also after that we will all participate in a green fashion tour, so we will meet sellers, buyers in Germany, in Berlin specifically…so we try to give them as much exposure as we can,” said Head of MEDC Hilary Hoffmann in an interview backstage after the show. She has been working with the designers since the beginning of this course February 2017.

The winning designers are Sina Peang, Nim Douch, Sovannara Sok, Sor San and Sovann Rachana Seng. Designers were picked on the basis of how modern (“mixture of modern and ethnic design”) and sustainable the designs were, as well as the quality of the product. All of the clothes on the runway were available in the Bazaar Phnom Penh at the runway show afterparty.

The judges in the competition came from Fashion Design Institute in Germany and Messe Berlin. Hoffmann had a say, too, as she’d been working with the designers from the beginning. The event was sponsored in part by the German Embassy of Cambodia.

MEDC was started three years ago by Messe Berlin “because at their trade fair they have different ethnic-inspired and influenced products from different continents, but from Southeast Asia they were lacking products from Cambodia,” said Hoffmann.

Above: Bold and beautiful prints by winning designer Nim Douch

Each year participants in the program are helped by graduates of the Fashion Design Institute – this year, Hoffmann – in design concept and development, textile and product care knowledge, and marketing and branding.

“A big part of that is concept and storytelling, because we want to sell products with a meaning and not just fast fashion that’s to be bought everywhere…. We have also different projects and workshops in the field, trade fair participation, that sort of thing,” said Hoffmann.

In addition, Hoffmann noted that next year Phase Two begins with fair trade certification: “Also what we do is do fair trade audits because we want to have the standard of fair trade. At the moment the certification of fair trade is a bit hard because it’s not yet fully developed. That’s also for the next project because we have another three years, with another platform on top.”

In previous iterations of the MEDC project, the designers have returned to Cambodia with the clothes they’d brought to show at the bazaar. This, year the merchandise will remain behind so that buyers not at the event can still have a chance to pick up some unique Cambodian fashion.