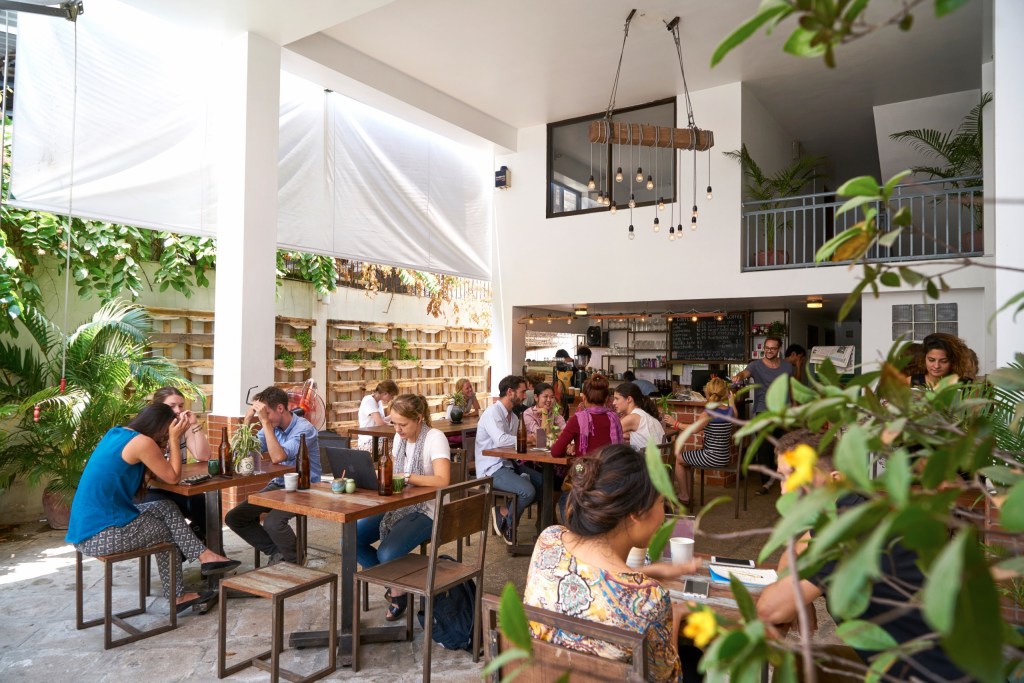 It’s been a while since I plagued the burger joints of the city with my glutenous appetite, and after a few years in Europe I’ve returned to the Kingdom of Wonder with a wider palette in mind. Phnomenal Eats is a mature development from Frazer Vs Burger, where I’ll be giving pointers of any masterful meals to discover in Phnom Penh – even if it’s not stuck in a bun.

Lot369 in Toul Tompoung could slot straight into Shoreditch in London as a hipster haven. The caffeinated watering hole has glorious air con space upstairs, and an open-plan courtyard peppered with freelancers indulging in the complimentary WiFi and plug points. Bonus tip: Every Wednesday there is a $1 coffee promotion at both locations (the other one is in BKK1).

The specials board above the counter listed a ‘Spanish Fry Up’ for $6.50, described as:
“A medley of chorizo, bacon, potato, gems, jalapenos, capsicum and chewy tomatoes, served with a fried egg and topped with coriander, and side of salad.”

The generous portion came with a bread basket and a little dish of salsa instead of the advertised salad, and there’s an array of condiments available to spice things up if required.

An ominous jar of spicy chilli paste in the condiments basket outshone the salsa for me – purely because I like my socks blown off from the heat – but that doesn’t diminish the tastiness of the salsa, and the dish was returned as clean as a whistle after I scraped every flavoursome morsel off the dish. Coriander tends to divide taste-buds as some genetic makeups apparently force you to taste ‘soap’, but to the lucky majority this herb is a great fresh addition that really rounds off this dish.

Chorizo is my absolute favourite meat, and although the vegan chorizo alternative in Vibe’s Mexican Burger was enjoyable, the taste of the Spanish favourite in this dish was heavenly.  In the TV show MasterChef you’ll see that professional judges try to get their forks loaded with every flavour, yet there’s so much going on in this dish that it’d be difficult for them to do so. Packed full of ingredients, I tried my hardest to get every flavour in one bite, but ultimately noticed an evolution in tastes as I went through the meal (aka I couldn’t).

The chorizo and bacon flavours work so well together, and with many fresh vegetables, this dish pops into a decadent brunch. Pricing in Phnom Penh is still a minefield, and the $6.50 price-tag reflects the big mix of ingredients, Western flavours and trendy area of the city.  If the picture got you salivating, then I promise it’ll live up to your expectations – give it a try.