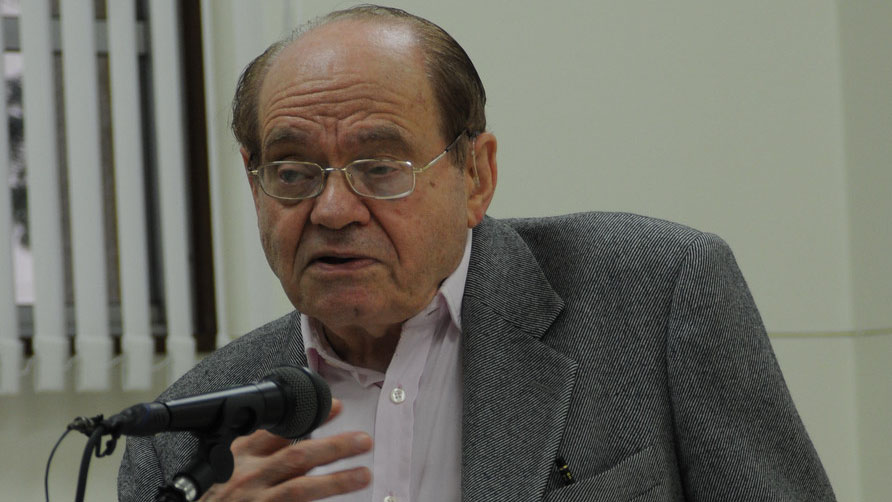 It is rare for a foreigner to cast as long and celebrated a shadow across Cambodia as Bernard Krisher.

Krisher, 87, journalist, publisher and philanthropist passed away on March 5 in a hospital bed in Tokyo before a private burial was held in New York,

Across Cambodia and the world, he was celebrated for his dedication to and tenacity in journalism, but also for the tireless philanthropic work he did for a country as it rebuilt itself.

His rural schools project built over 560 state schools across every province of Cambodia and his Sihanouk Hospital Centre of HOPE provides free medical care to the poor and educational facilities for children from remote communities.

However it was his work in journalism and the founding of the Cambodia Daily that garnered him the most attention and respect both in Cambodia and across the globe.

He always wanted to be a journalist, working for the New York Herald Tribune during college and for Stars and Stripes in Germany in 1953 after being drafted in the US Army, before studying journalism at Columbia University in the early 60s.

In 1962, he moved to Japan to work for Newsweek’s Tokyo bureau where he began reporting on southeast Asia and was eventually promoted to bureau chief in 1967.

It was during this time, thanks to an exclusive interview with Indonesian president Sukarno in 1964 that he was introduced to Prince Norodom Sihanouk who invited him to Cambodia.

While their relationship had a rocky start, with Sihanouk severing ties with the US partly thanks to a Newsweek article Krisher wrote, ties were eventually reestablished and they formed a close friendship which was the starting point of Krisher’s humanitarian work in Cambodia.

In 1993, Krisher founded The Cambodia Daily with the self-proclaimed mission to present all the news without fear or favour, and to nurture free press as the country was recovering from decades of genocide and war.

“Bernie taught his local reporters how to stand up to those in power by reporting the truth,” opposition politician in exile Mu Sochua told the The New York Times.

“Bernie was a tough man and demanded justice for those without a voice.”

The paper hired and interned many young Cambodian and foreign journalists who would go on to work for countless respectable publications.

Many have noted Krisher’s ferocity for truth-telling, straight faced journalism flowed through to the ethos and standard of the paper itself.

By the time Australian-born journalist Matt Blomberg began editing and reporting for the Daily in 2012, Krisher had returned to Tokyo in poor health, but his presence in the newsroom was still very much felt.

“Bernie had become a bit of a mythical figure by the time I arrived, lording over the newsroom with odd rules and an iron fist even from his sick bed thousands of miles away,” Blomberg says.

“In his later years, he’d be wheeled into the newsroom every so often; the way the Cambodian staff flocked to be beside him says everything about the opportunity and confidence he’d given them to fight against the country’s entrenched, corrupt and ruthless ruling class.”

While many obituaries and past anecdotes noted Krisher could be demanding, unpleasant even, Blomberg noted his ruthless attention to detail and fact-finding lead to The Daily’s internationally acclaimed standard of journalism.

“He’d cultivated a siege mentality in the newsroom – it was extremely intense, possibly unhealthy, but we adopted it and went to bed each night thinking about how we’d outfox our rivals (The Phnom Penh Post) the next day,” he said.

“I’ve not seen a workplace with higher standards, you could be dragged out of bed at midnight to come back to the newsroom to dot an i or cross a t,  you didn’t make the same mistake twice.”

While the paper’s fierce independence had clashed with Prime Minister Hun Sen over the years, things reached a tipping point in 2017 in the lead up to last year’s national elections.

The CNRP was banned, critical radio stations were taken off air, NGOs were expelled from the country and The Daily was handed a $6 million bill by the tax department and forced to close its doors with a final headline: “Descent Into Outright Dictatorship”.

While press freedom in Cambodia is now virtually extinct, with the Daily’s website now offshore and its rival Phnom Penh Post bought out by a government-friendly PR firm, Blomberg and others have made a point to show Krisher’s legacy lives on.

“‘I learned English from the Cambodia Daily’ is right up there beside ‘You need tuk-tuk?’ among my most-heard phrases over the past seven years,” he said.

“In the absence of textbooks, school teachers across the country used the paper to teach English, and apparently some still do.”