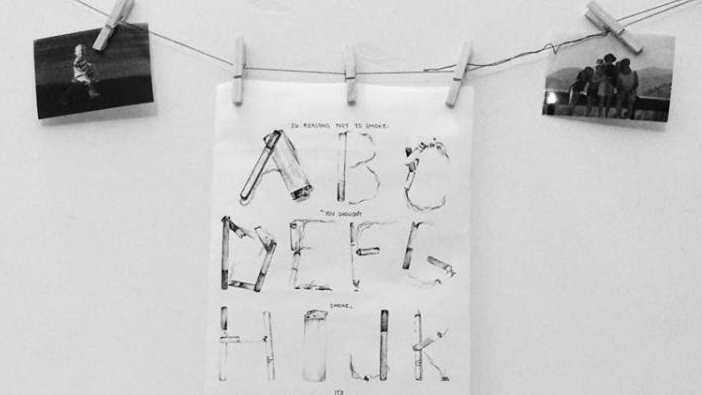 Seattle-born Retka’s craft began three-and-a-half years ago as a kind of visual diary; a way to process her new life in Phnom Penh.

Or, as she puts it: “there are certain times of your life when you need a diary more than others. When I first started drawing heavily, I needed to get shit off my chest.”

Predominantly using Micron pens and sketch paper, Retka’s work spans subjects from Vonnegut to dog shit, swinging between grittiness (a dead rat next to a pack of cigarettes), to glory (a map of Phnom Penh, depicting its most iconic architecture). It ranges from friends’ personal highs and images of her dog, Marv, to the lows of shitty years and exhaustion.

She started with typography, literally spelling out her emotions and conversations with people, but Retka says her style has moved on to art that is still personable but not always as explicit.

“All the things in my pop-up shop are personal to me, but I don’t think the person buying them is necessarily going to know that,” she said.

Today, she experiments with new media, including block painting (which she learnt at N-o-w-h-e-r-e  art space), as well as embroidery. She also regularly contributes editorial illustrations to Mekong Review, among other publications.

This weekend’s pop-up shop will feature a mix of her new and old designs, including her Pearl of Asia print t-shirt and bags she describes as her ‘deuces’: one side showing the peace sign, the other the back of the same hand: the UK equivalent of the middle finger. Her embroidery and a zine she put together will also be on sale.

“I’ll have a lot of time to do more editorial illustrations but also a lot more art, more projects and experimentation,” she said, adding that she’s keen to get back to drawing the streetscapes of Phnom Penh.

“There’s definitely still grittiness, but a lot of it has shifted just out of sight as the city becomes more gentrified and I think that’s something that’s interesting, to see that happening.”

In the meantime, Retka said she’s excited to share her work with the world at one of her favourite bars in town.

“Hopefully people can find some comfort, whether they’re living here or travelling through. It’s a souvenir of a place that really captures your heart,” she said.

Oh Yes it Does! Jack and the Baked Beanstalk Opens TONIGHT
The Search Is Over: Phnom Penh Now Has Its Own Top End Gin