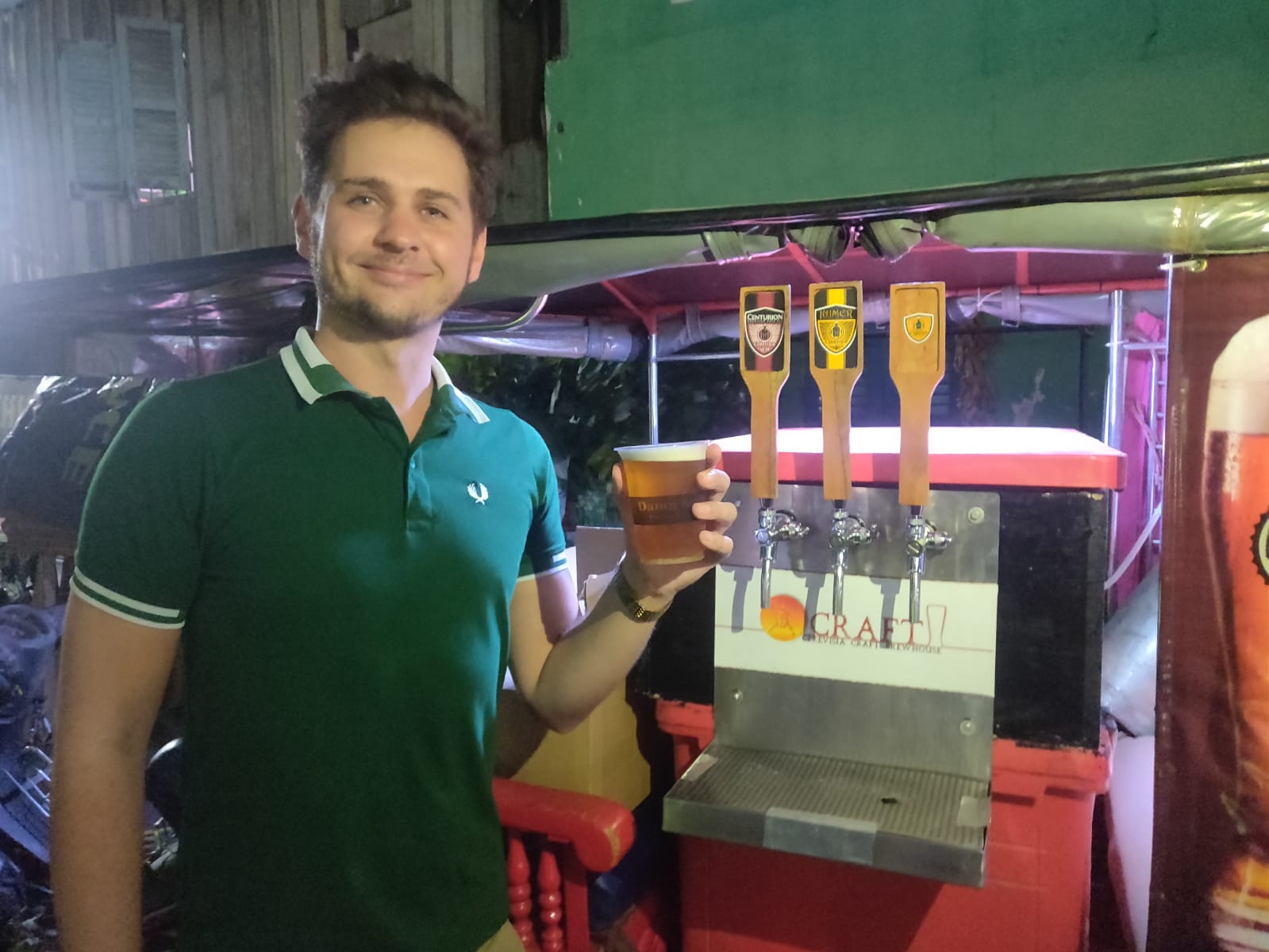 The talented thirst-quenching minds at Cerevisia Craft Brewery have launched a mobile solution to isolation woes. Their ‘Beer Bar Tuk Tuk’ is a delivery service bringing bottled and fresh tap beer to your home, with a ‘pay it forward’ scheme in place to spread much needed cheer and camaraderie.

The tuk tuk is equipped with three different beers on tap, as well as a multitude of bottled beer available to order. All beer is locally brewed by Cerevisia and the taps trio rotates through a mixture of seasonal selections and their four core beers:

The option to purchase a ‘Glass & Beer’ for $7 allows customers to then refill that glass for only $3 a beer. Alternatively, cups are also priced at $3. For the more lavish option, one or two litre growler serves are available at $6 and $11 respectively.  Brand new branded two litre growler bottles are available to buy (filled with beer) at $20.
Customers can also purchase a case of 24 bottled beers for $36. [We also recently wrote about two other local case options here.] At the moment, all payments are cash only.

Giving it a whirl, the bar arrived outside of my apartment with both a driver and team member. The options this evening (Tuesday 7th April) included the Centurion, Great Glen and Khmer Honey Blonde. After trying a glass of the IPA I was made aware of a special offer on bottles and opted to mix-and-match five bottles for $10.

I couldn’t resist the five beers for $10 offer, clearly.

The Beer Bar Tuk Tuk is in operation Monday to Friday 5pm-9pm and Saturday and Sunday 12pm-9pm.

Speaking with Cerevisia team member, Jared McLean he explained the essence of the idea:

“The Beer Bar Tuk Tuk started as a way to uplift our community and keep our team in jobs. With everything going on in the world – normally at times like this we catch up with our friends over a cold craft beer and relax. Social distancing has made that hard. From every challenge comes an opportunity! While chatting with our founder Erich Phillips – the idea of the Beer Bar Tuk Tuk was born. But, that is the marvel… what is amazing is the idea to “Beer it forward”

We encourage everyone to play it forward, and keep the Beer chain going!”

Mr Vannara is our precision beer bar tuk tuk driver. When you are carrying such a precious cargo – only the best driver will do!

Given the recent success, Cerevisia Craft Brewery are considering commissioning a second tuk tuk bar to handle the growing demand. Currently the delivery is limited to BKK1, BKK2, BKK3 and TTP – although extensions to the nearby surrounding areas are also being included*.

The aforementioned ‘Beer it forward’ idea is paired with a current reward scheme, whereby customers ordering two beers for their friends, get two free beers for themselves. Messages can be included with the delivery to your friends, giving a wide range of jovial options to consider such as buying post-work beers for co-workers after conferencing calls!

Contact the Beer Tuk Tuk by calling/whatsapping: 078 300 551
*Contact the Cerevisia team firstly to confirm if you meet the delivery zone requirements if you’re outside of the named areas.

Further information on Cerevisia Craft Brewery can be found via: