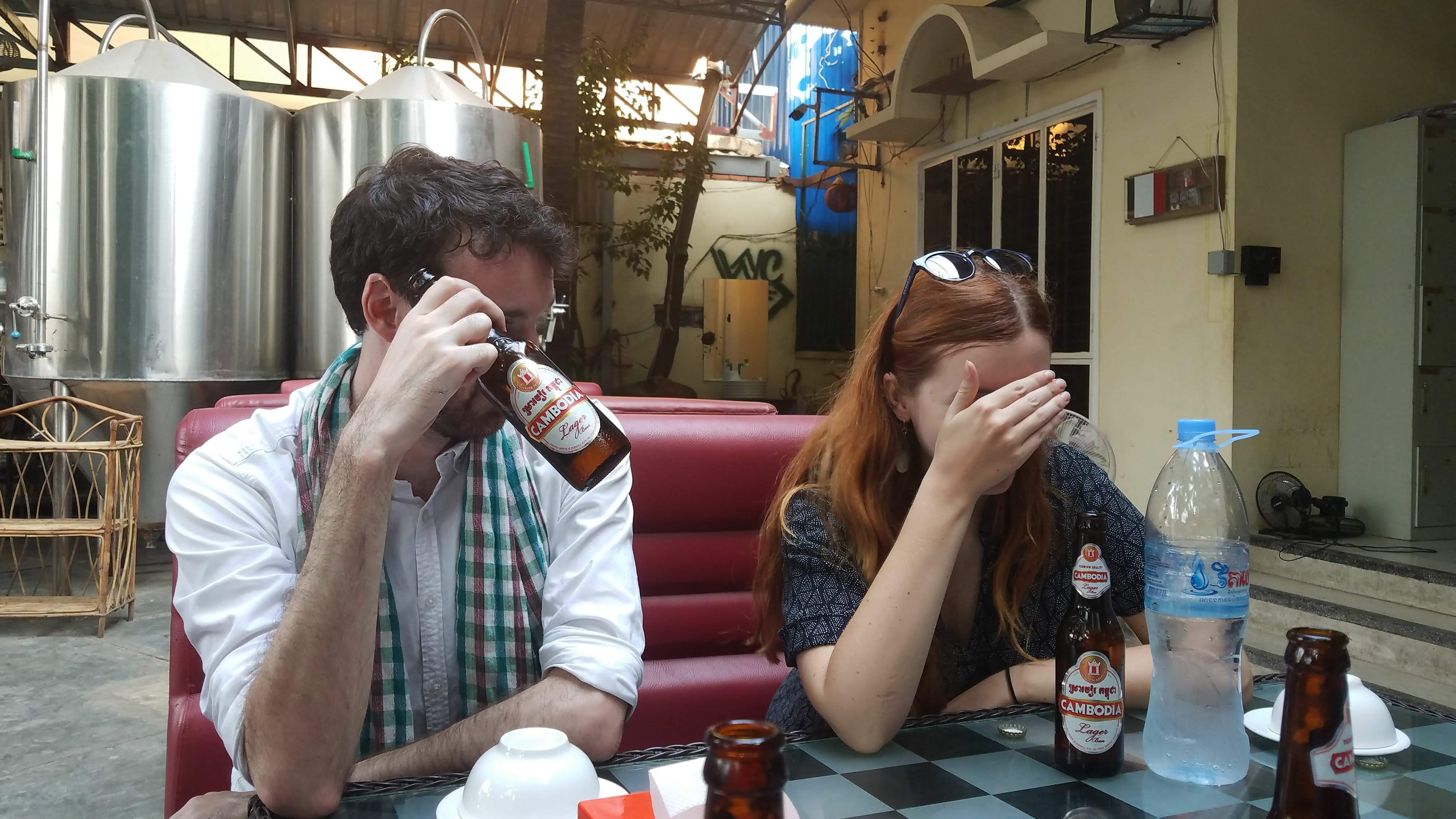 While we (well, most of us) recognise that climate change can severely impact or even destroy habitats, animal populations and, thus, our long-ingrained ways of life, it’s often overlooked that it can also cause entire nations to disappear entirely. That’s what Anote Tong, President of island nation Kiribati, is contending with as ocean levels rise. Anote’s Ark documents his efforts to protect his country’s people and heritage as well as the actions of the citizens themselves who are seeking refuge in other lands.

First off, for those hoping to get on the mic themselves tonight, there is literally nine straight hours of karaoke opportunity to do it. Wanna challenge yourself?

Starting in the afternoon and into the evening, Wings & Beers has 4-7pm happy hour (with $0.75 draft beers) and buy one get one chicken wings throughout its open karaoke sesh. (7pm, W&B, St. 135) Once you’re loosened up, totter one street over to Alchemy for Mic Drop Karaoke, with professional lights, sound system and even musicians to make your dreams of stardom a reality till the wee hours of the morning. (9pm, Alchemy, St. 123)

Three Country Drunks are playing tonight. We can’t tell you what country drunks sound like. But they go hand in hand with BB Q drunk chicken leg, shrimp crackers and chicken skin – part of a pop-up by Fat Passion at Meat & Drink – so probably pretty authentic. Haha.

Soul singer Mirasol Aguila will be joined by a Phnom Penh newcomer Pristine Faith on stage and vocals, backed by Arone Silverman on guitar, at this special evening concert at Alchemy. Mirasol and Pristine will sing the hits from R&B to hip hop to soul.

Mary specializes in jazz and bossa nova singing, with the “voice of nightingale”, while Takeshi has been playing jazz and bossa nova guitar for his entire adult life.The Japanese duo, playing together as Mary and Takeshi since 2013, will regale listeners with their virtuosity at Cloud tonight.

Jazz and the City is featuring songs from Cole Porter’s playbook. He was a man about town – a social butterfly – whose songs conveyed his positive outlook, love and gaiety. Bringing his work to life anew are Intan Andriana and Metta Legita with Stan Paleco.

Indie rock band The Goldilock Zone will be debuting brand new tunes tonight at Ege Bar. As well as the favourites from their last album, naturally.

International Beer Day may have passed us all by if it hadn’t been for the dogged dedication of several of Phnom Penh’s hubs for suds.

Celebrating the occasion all day is The Box Office, home to 20 craft beers on tap, plus many in bottles and cans as well. They’re offering 50% off all beers from noon till night! Plus free sausages. 🙂

Lantern Rooftop Bar, also in a giving mood, is offering five of any brand of beer for $10. So grab four of your friends…or wing it solo and double-fist twice…plus one.

Depending on how fast you can put ‘em back, Good Times may have the most economical deal yet: two hour free-flow Carlsberg draft beers for $10. The deal also includes a BBQ sausage. 🙂

Tacos Kokopelli is doubling down on the international part of the holiday, offering $0.50 Cambodia beers AND Mexican street food. Four tacos dorados and mini salsa bar for $4 and, of course, the cheap drafts.

Dance as a spectator sport is back at Toul Tompoung institution Teddy Bar. The Best Show Ever is an energetic drag performance in a cozy setting – so in a way, it’s like you’re on the dancefloor.

For something a bit more old school, check out the funk, disco, house pouring out of the speakers and through the open-air front of bar/venue Duplex at tonight’s Twisted Disco.

Love Lounge – a restaurant and lounge in the location of Club Love above Duplex – is welcoming singer-songwriter Lisa to its stage. And welcoming customers with 50% off all drinks during her performance (9-10pm).

Phnom Penh live music legends Hypnotic Fist Technique make their post Covid comeback tonight. The boys will be supported by DJ Sna, who will warm up the crown from 8pm. This isn’t just any old come back however, this is the start of a whole new way to support live music in our great city as we write about here.

It’s an art fest! The first in a series, Synapse 1.0 is a dance performance, art exhibition (KOK) and live painting (Kakada Yi), auction, concert (Branden Perez) and local cocktails tasting from three vendors. Sponsored by Dopamine Kh and held at Phnom Penh Dance Studio, it’ll feature a dance show in collaboration with youth nonprofit Tiny Toones, which will also receive a portion of the ticket sales. Tickets are $6 and $8 in advance and $10 at the door, and include three free Dopamine shots.

Good Times, a new gallery/hostel/bar, is celebrating its newness by holding a photo exhibition of old Phnom Penh – specifically from 1973 to 1975, before the fall. The photos are from two series, “Dancers 1973” and “Phnom Penh Before the Fall: Snapshots From a Besieged City”, by Colin Grafton and Keiko Kitamura. At tonight’s opening, both artists will present their works, followed by a live concert by Blues Routes, featuring special guest Sokim Keat.

Part scavenger hunt, part walking tour, part deliciousness – launching today is Urban Tales, “an urban gastronomic game”. Following a mysterious storyline, you decipher clues and meet characters along the way to uncover a statue and discover a secret ingredient at Pépé Bistro…where you then enjoy a two-course lunch. Book in advance to be placed on a team; it’s $35 to play and eat.

Learn the basic movements and breathing practices in Ashtanga yoga in just over an hour. The class is for any yoga beginners or those who want to get into this style. $10 for the class, and you have to bring your own mat.

Four DJs are lined up to make you feel groovy as you watch the sunset, when you get your third cocktail, when you decide that EVERYBODY has to dance – Sunset Sessions has you covered. DJs Dr Wah-Wah, Rob Bianche, Jack Malipan and Sound Advice will be playing soul, funk, house and disco.

Japanese DJ Moto will spin reggaeton hits at Est. Lounge’s La Hora Loca, or “crazy hour”, so named because of the craziness of the dancing people get into. Back by popular demand, so that’s a good bet.

Legendary director Akira Kurosawa is not only the best known Japanese director of the 20th century, but one of the most influential and respected filmmakers of anytime, anywhere. So when he was 80 years old and wanted to make a magical realist film featuring eight recurring dreams he’d had, people were like, “Yeah. You’re great. Sounds good!” And Yume (Dreams) was born – to nobody’s disappointment. It screened at Cannes and is still highly rated.

Banana Leaf, located in the new Chipmong mall on Norodom, is holding a “high tea” and fashion show. The $12 entrance includes desserts, a soft drink and gift vouchers – and presumably tea. The fashion show is put together by Sui Joh and Luna Boutique.