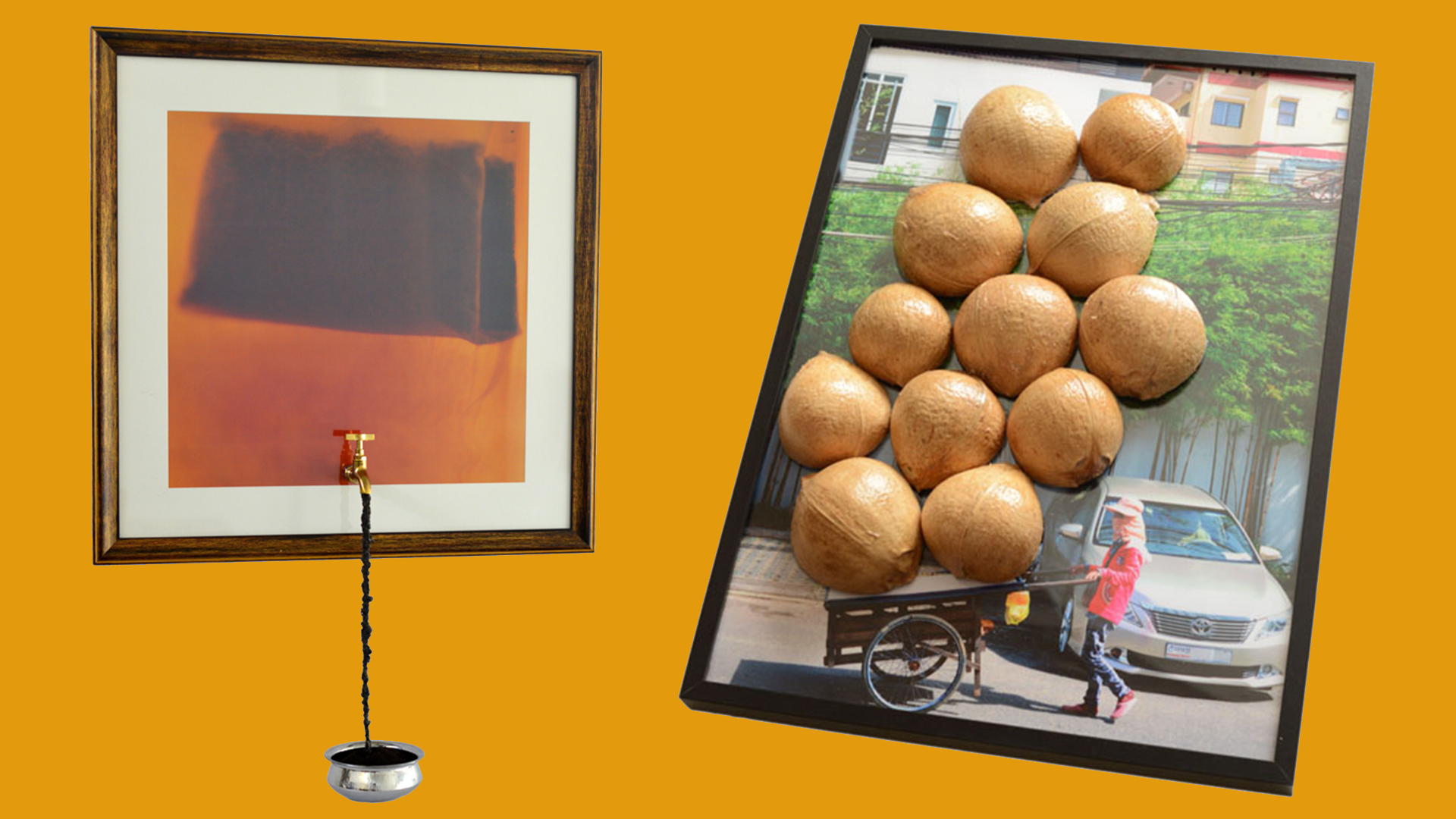 How do you capture the all-encompassing warmth of sipping tea in Pakistan? Convey the gooeyness of a melting marshmallow? Squeeze your visual memories of a place into something as tiny as a matchbox?

In his multimedia exhibition Senses, Canadian artist Chris Stewart abandons any idea that his subjects should sit safely within the confines of the frame, appealing only to our sense of sight. In T4U, a tap leaps from the deep orange-browns on canvas, pouring a perpetual rope of tea to draw you into the ritual. A tiny hole in a matchbox reveals an internal diorama of Athens, like a 3D postcard. A photograph of a Cambodian coconut seller’s cart is piled high with real coconut shells. Textures ooze from corners or tumble out of each flat image.

That much of the work centres around depictions of food is unsurprising given the nature of Stewart’s best-known project, Candy Critic, a long-running blog where he reviews weird and wonderful confectionary from all over the world, based on its taste, texture and novelty factor. The pieces in Senses incorporate scents and tactile elements – and Stewart says visitors are more than welcome to handle elements of the artworks and sculptures for themselves.

Stewart says that he often draws ideas from the architecture of the countries he works and travels in, making Cambodia’s impressive Angkor temples the perfect inspiration. Again, the Cambodian pieces reference the thrill of interacting directly with these ancient relics: “the idea of being able to go to these places and touch and feel”.

All about the minutiae: for One Teaspoon of Rice, Stewart individually photographed all 313 grains of rice that fit into the teaspoon in the collage.

Much of the series has toured the world, with exhibitions in Greece, Cyprus, Pakistan and Canada. This show is special, though, in that it includes a smaller series called Gamboge: a highly popular shade of yellow paint in the West, named the Latin term for Cambodia, and which originated in the Kingdom.

“It’s been around for you know 100 years or more, this colour,” says Stewart. “They used to send artists out all over the world to discover new colours for paint companies in Europe, and one company sent people to Cambodia and they discovered the dye that they used to colour the monks’ robes.”

In the Gamboge series, Stewart adds “splashes” of the colour to images of traditional Angkor architecture and temples. Of the colour’s versatility and effect, he says: “it completely blew my mind”.

But what comes first in this creative process, the subject matter or the unusual items and materials that he uses to represent it? Stewart says it’s a bit of both; when he’s drawn to an object – be it a lightbulb, a leaf or more conventional art supplies – he’ll often magpie it into his collection, waiting for an idea or experience that sparks the right fit.

“Most people, and my wife as well, would say I’m a hoarder,” he says. “I love learning about new material. Just poking around and seeing what’s there. I find things and I feel them… and then whenever I move, I take about a year and I absorb the culture, and then I sort of look through my my my box of art supplies and think about how I will make connections”.