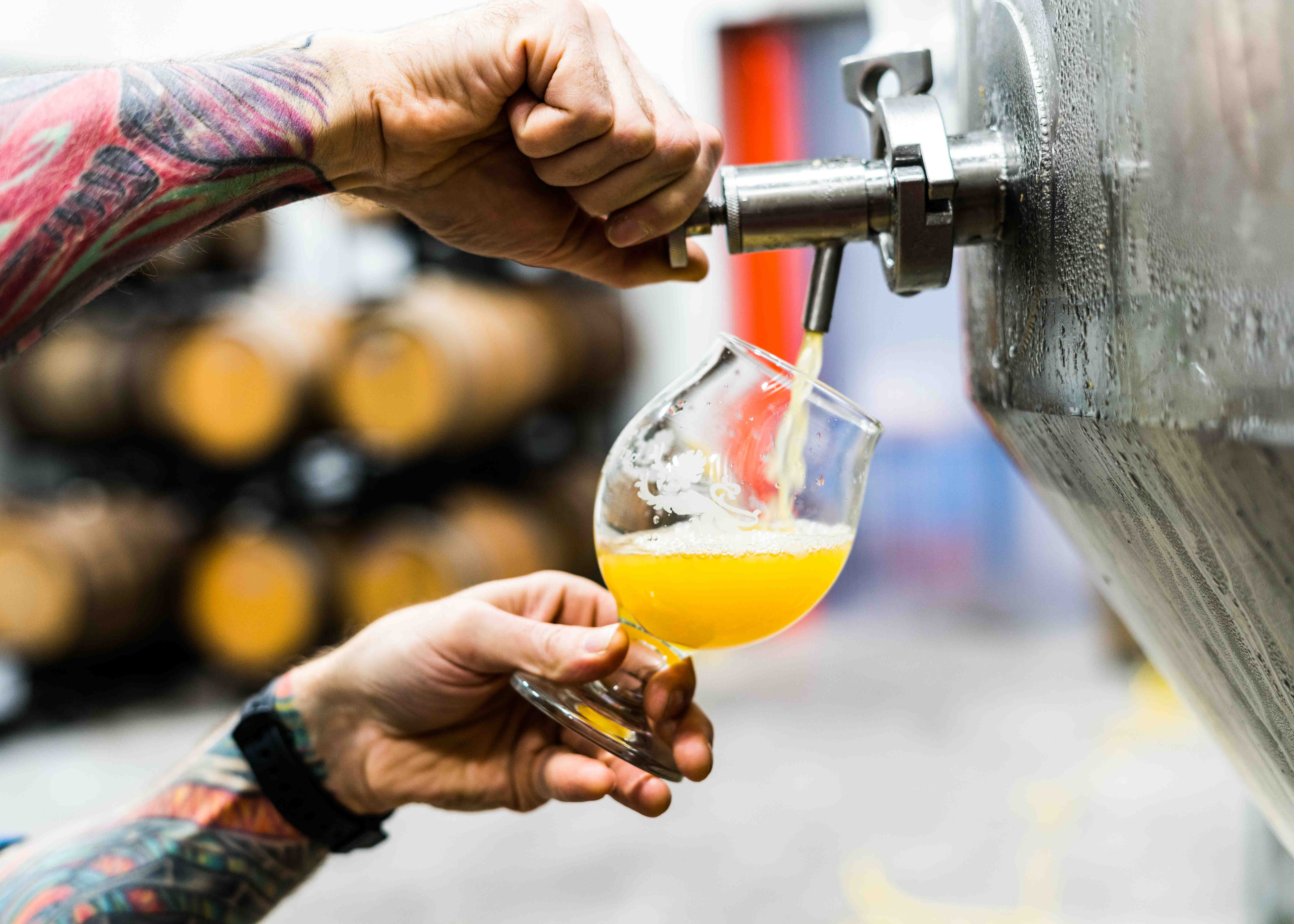 Sitting in the taproom of their brewery, the two owners of Riel Brewing and two of their staff members are in the process of creating a new brew. At the brewery’s entrance sits large silver cylindrical machinery that performs the temperature-sensitive task of mashing (or steeping) the grains which will then take roughly two weeks to a month to ferment into something drinkable.

During this early stage, there’s a lot of waiting around – which provides an opportunity for Australian Tyler Bareither and American Andrew Srugnell to speak with What’s On Phnom Penh about the craft brewing scene in Phnom Penh.

The friends have lived in Cambodia for nine years. Roughly six years ago, fed up with the lack of good beer options and keen to start a business here, they decided to save up to open a brewery.

For a long time, the only beers you would see in the Kingdom were the ubiquitous Cambodia, Angkor, Anchor and Ganzberg lagers. That doesn’t mean that other brewers didn’t exist; you just had to know where find them.

“The first craft brewer was Munich, and it was an old German guy who had started that place,” recalled Srugnell. “When I got here in 2010, he was, like, 75. He sold the brewery to [chain restaurant] Master Suki Soup”.

Kingdom Breweries, which is still in existence and selling Kingdom beers around the country, started in 2009. Himawari Microbrewery, ostensibly created to brew beers specifically for the Himawari Hotel (where it’s located), came next in late 2012.

“And then there was Cerevisia”, adds Bareither. “There’s probably about 12 now. In terms of this style, it’s pretty much just us and Cerevisia.”

Cerevisia was founded in 2013. “The supply chain was not as easy as it is now back then,” says the company’s owner, American Erich Phillips. “A lot has changed in six years. A lot of craft beer at that time period was mostly grey [unofficial] market, and Thailand is not going to accept it and Vietnam is not going to accept it, but somebody else will. And so that was kind of the market that we started in – where it was a culture of trying to teach people about the beer, and how it’s different than a 50 cent lager, and how there’s a lot more love and care and also costs that are associated with it.”

“I really wanted to start a nonprofit brewery,” he laughs, adding: “That idea was not as received as I thought it would be by NGOs. [They] didn’t want to connect alcohol with the services that they were doing. Which makes sense. So it’s not a part of the culture. Since it didn’t take off as well as I’d thought, we switched to just making beer and selling beer.”

Bringing Back the Good Stuff

Craft brewing has been happening in Cambodia for quite some time – but you may not have been able to see it. Most of the breweries in Cambodia produce at least some beer for other companies based outside the country. Kingdom Breweries, for example, makes Kingdom beers for Cambodia, but also produces many craft beers that are for sale only in Thailand. In fact, because of stringent brewing laws in Thailand, most Thai craft beers are actually brewed in the Kingdom of Wonder.

“You have to set up a brewery that has to produce ten million litres of beer – first off, as a minimum – and then you are taxed on that full amount, regardless of what you produce.” explains Patrick Davenport, another American, of the Thai system. He was one of the original founders of Kingdom Breweries and now owns Vietnamese brewer Fuzzy Logic, as well as other companies in Cambodia. “So nobody really looks at it as a market because you have to be really big, and then even a big brewer knows it takes time to gear up.”

Stone Head Brewery, established in 2015, is one such Thai beer company, strategically placed in Koh Kong for easy transport across the border.

In fact, they’ve only started selling Stone Head beers – which differ from the beers produced for the Thai market – in Cambodia in the last five months. After just eight weeks, they’d moved into 56 bars and restaurants in Phnom Penh alone, with plans to expand into other cities in the country.

Tapping Into the Local Scene

Fuzzy Logic is already selling bottles in Cambodia, but the company is now planning on brewing here, too It’s opening a “beer cafe” on the ground floor of its offices in Phnom Penh’s Toul Kork neighbourhood and is also opening a brewery in Siem Reap, under the guidance of their brewmaster Jeff Olson, well-respected in the local brewing community.

Since Riel Brewing’s founding four years ago, other notable brewers have entered the market. TwoBirds Craft Beer, which moved into The Factory in April, is the creation of German father-and-son team Bernd and Connor Kirsch, previously known as Hops beer and BeerPro when located at Hops Craft Beer Garden and Eden Garden, respectively. The pair also played a part in founding Ganzberg beer in Cambodia.

Just over three years ago, an independent Japanese brewer called Yuki Aotani began Flowers Nanobrewery in Kampot. Known for its authentic pale ales and colorful Marimekko-style labels, bottles of Flowers can be found outside of the river town in certain craft beer bars in the capital.

Photo by Fábio Alves on Unsplash

And that’s something else that’s been growing: bars dedicated to serving craft beers. The Box Office opened in the beginning of 2016 and, like the early brewers, found a challenge in trying to move people away from the cheap beer market.

“So we started off slowly with two taps [carrying Riel Brewing and what is now known as TwoBirds], then four, then six, then ten,” said owner Paul Glew, from England. “We realized that there is a craft beer market. There is supply now. That was always the biggest issue. There weren’t enough craft brewers that could supply enough to fill ten taps.” The Box Office now has a wide selection of beer, including every brewery mentioned in this article and others.

In 2018, along came 5 Drunk Men on Riverside, which boasts a beautiful view from its rooftop bar and carries a selection of craft beer bottles from the region, including Stone Head and Phnom Penh’s own Indochine, as well as brands from Thailand, Vietnam and Singapore.

The most recent addition to the craft beer bar scene is Embargo, having opened earlier this year. The American and Finnish co-owners knew each other when they both lived in Thailand, and seeing that craft beer was coming up in Cambodia, decided it was a perfect opportunity to share their passion for craft brews.

“As far as selection goes, we really want to have every type of thing, from a sour to an amber,” says co-owner Jeff Baker. “And we can’t get specific stuff like a black IPA because it just doesn’t exist here yet, but we want to have a good variety and not just ‘here’s 20 IPAs that I love’. We want to have a good mix. I think we do at this point…. If you come in another two weeks, we’ll have a different selection.”

And what they can’t get, they’re determined to. “We’re also going to commission our own beer with the guys from Riel,” added Baker. “It will be a sour. Because that is the number one request that we get, and I’m always heartbroken that I can’t give people a sour.”

Photo by Tom Quandt on Unsplash

Some common threads run amongst the brewers and brew pub owners. Almost everyone can spit off the top of their head types of beer and methodology (and how not to do it); they want to incorporate Cambodian flavours, ingredients and have Cambodian staff come up with recipes – and they want to share their passion for beer with others.

In fact, the brewing scene is a pretty tight-knit community, especially for people who are, in theory, competitors. They put on beer-related events together, with talk of a possible Oktoberfest in the future. They speak well of each other and lend their support for the practical stuff. Riel Brewing is even building the draft system and cold room for Fuzzy Logic’s new Tuol Kork taproom.

“What I like about the craft industry is it’s very, very helpful overall,” said Fuzzy Logic’s Davenport. “If people can, they try to help each other out. That is really not normal in most businesses.”

Check Out These Top Spots for Craft Beer in the Capital:

Wide collection of craft beers on tap and bottled

St. 278, Wat Langka | 7am-10pm everyday (but usually open much, much later on weekends, depending on the events)

Wide selection of craft beers on tap and bottled

Unlimited Kingdom & Indochine draft beers in the Taproom bar for $10. Brewery tours included for an extra $5.

UPDATE 22/11/19: This article originally contained an editor’s note referencing the fact that that several bar owners had expressed concern about working with Andrew Wallace, who was then one of the directors of Stone Head Brewery. Stone Head has stated that Wallace has since left the company and no longer has any stake or involvement in its activities.