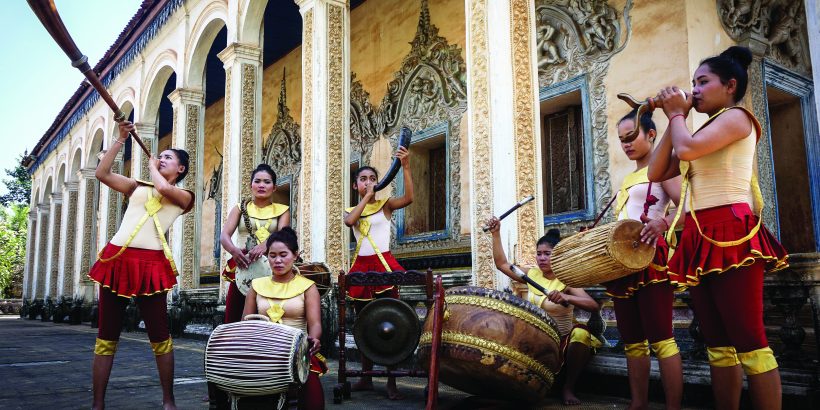 Heading up the Tonle Sap this weekend? Don’t miss this fabulous three-day celebration of Southeast Asian arts and music, which showcases traditional styles with a very modern twist.

Organised by Cambodian Living Arts, REPfest brings together artists from around Asia, with a particular focus on the greater Mekong region. Alongside a line-up of innovative performances, there are also opportunities both for artists and visitors to learn new skills and try out new ideas – including a number of public workshops you can take part in, completely free of charge.

Hermione Brooks of Cambodia Living Arts described the purpose of the festival as breathing new life into ancient ideas, creating opportunities for artists from different countries to collaborate, and “creating new stuff based on traditional approaches”.

“There’s lots of shared heritage within the region, and so the festival is a good time to explore that,” she explained. “As well as the public workshops, we’re doing private artist-to-artist workshops, so this gives us a way of creating pieces together, and getting to know each other, and hopefully creating new stuff through the festival itself.”

As well as encouraging artists to create across border lines, some of the festival’s participants see this as a chance to break down traditional gender barriers, too.

Sreypich Saing of the Cambodian all-women drumming group Medha said that she and her team mates are “very excited” not only to play at at an international festival, but also to share their message that women needn’t be constrained by traditional stereotypes.

“Initially drumming was to be performed by men only,” she explained through an interpreter. “We wanted to push those limits. It is a big thing if you are female to hit the drum, to beat the drum, it takes energy and effort… I’m happy and proud to say, this is my female team. The performance came from our idea, and we’ve kept developing it. That’s very satisfying.”

Sreypich hopes that seeing artists like Medha perform will inspire other women to push themselves and recognise their potential.

“The important thing about our performance, the concept that underlies it, is that women are strong. I would like to encourage every woman who sees the piece to believe that,” she said.

REPfest takes place in Siem Reap from 27th – 29th October. Shows and workshops will take place at several venues – take a look at the full schedule for details.

This Team Is Turning Clothes Into Thought-Provoking Art
Moondance: The Ultimate Halloween Party at Tusk