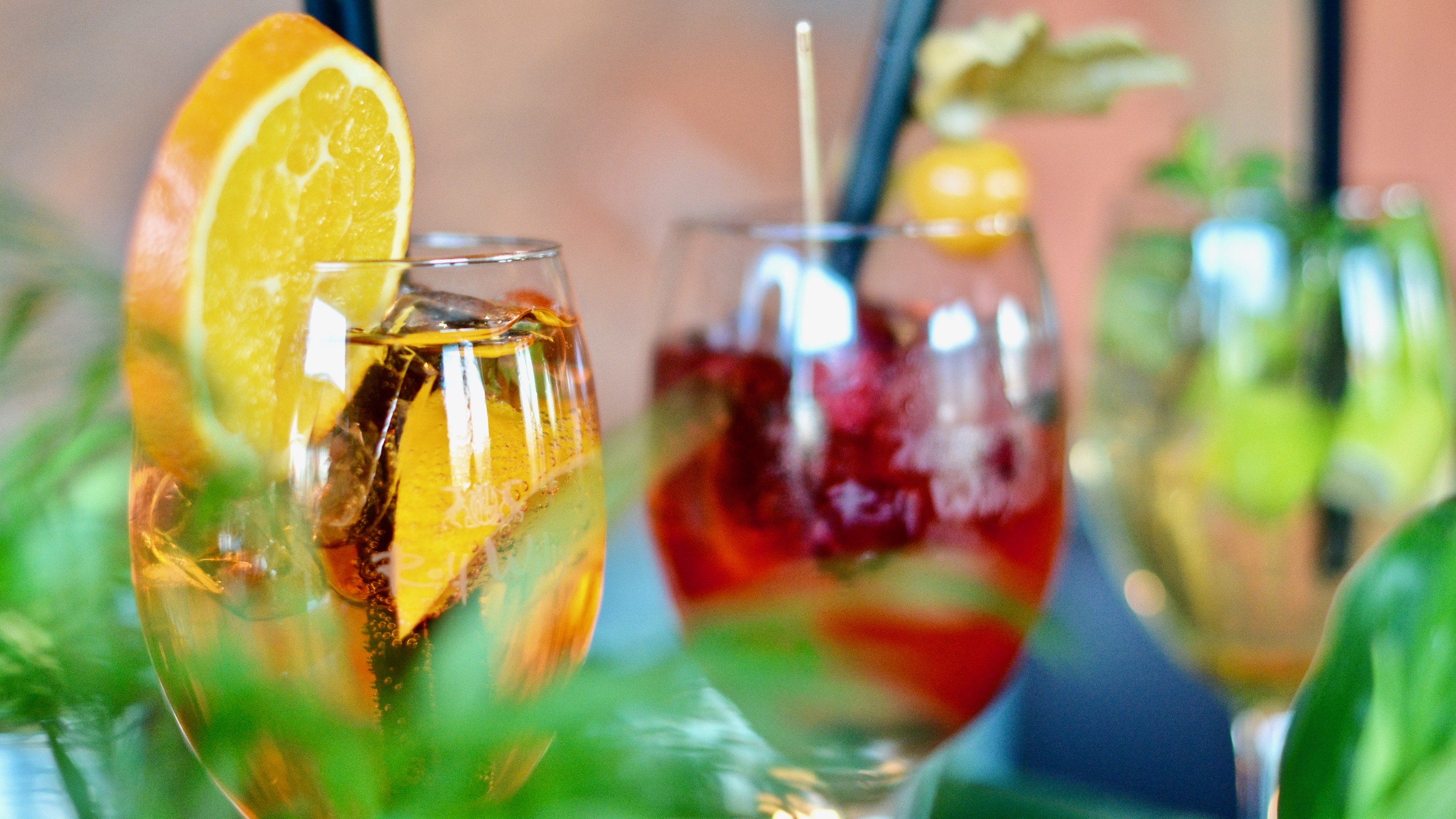 It’s all about the G&Ts this weekend, as the Gin Jubilee takes over the city. Plus: an animation festival, photojournalism, tons of music options, some great films, a coffee-making course… and the Kampot Playboys are back in town.

22 bars across Phnom Penh are taking part in a huge celebration of gin this weekend – and by voting for your favourite take on the classic G&T, you could even win a trip to Singapore.

As part of the Gin Jubilee, tonight sees special drinks whipped up at The Den (Bassac Lane), Brooke Palmer playing at Farm to Table (from 7pm, St 360) gin tasting at Tipico Tapas (7pm-11pm, St 454) and a “Gin Ramble”, in which the La Familia team will take you from spot to spot by tuk tuk to sample delightful gin-based creations around the city. (5pm-10pm, $12; email andre @la-familia to book a spot).

Tonight, META House hosts exhibition of photographs by Phnom Penh Post reporter Alessandro Marazzi Sassoon, documenting the horrific fire that destroyed 2,000 square km of Cambodia’s unique wetlands. Sassoon first visited the area during the peak of the fire to record the efforts of rangers desperately trying to control it, and returned a year later to assess progress that had been made in recovering from it. The resulting collection shows the “slow-motion evolution of the cataclysm as it continues to unfold long after the fires have been put out.” (6pm-10pm, META House, Sothearos Boulevard)

Over in Tuol Tom Poung, a new music trio called Grass Snake, made up of Mark from Kampot Playboys, Antii Siitonen and Joe Wrigley, are playing at Alchemy. The guys describe their style as a blend of bluegrass, country and Irish folk, combining acoustic guitars and mandolin with cajon and bass. We’re intrigued. (8pm @ Alchemy, St 123).

It’s Friday 13th and things might just get weird tonight at Tusk, where DJ Yes Peace is spinning jazz funk and electro swing, the drinks are flowing and the pool is open as usual (9pm-2am, St 278).

And, of course, Kaztet D (WAT A GWAAN) is on the decks at Top Banana (9pm, St 278) – catch him now as a little birdie tells us he’s leaving Phnom Penh soon – and DJ Joshi and Friends keep the party going well past sunrise at MADHouse (10pm-7am, St 172)

The Gin Jubilee continues tonight with “Gin Lane” a massive party at the swanky Raffles Le Royal. But while the setting might be luxurious, the prices are actually pretty reasonable – $4 for a signature G&T. (6pm-Midnight, Elephant Bar @ Raffles le Royal, St 92, off Monivong).

For a fun but slightly less sophisticated party, Bophea Pub is hosting a Senior Prom reunion party tonight, with unlimited food and drink included in the $26 ticket. Hurry though – there are only 200 for sale! (5.30pm-10pm, Bophea Pub, Tonle Bassac – between Jet Container Market & Aeon Mall).

And over at Hops Brewery & Beer Garden, Britcham is hosting night of the UK’s favourite food: curry. Curry chefs from all over the city have come together to cook their best recipes, and guests are invited to try samples of them all and vote for the best. Our stomachs are rumbling already. (6pm-9pm, St 228. Tickets $10, including curry samples, two free drinks and two side dishes).

Plus: ever wanted to learn to make coffee like a pro? BlueKoff Cambodia is offering a one-day Basic Barista training course today. Give them a call on 099 740 742 for more info.

The Animation Festival also continues today with a schedule of 17 very short films (around 3-4 mins each) by students of the GOBELINS animation school (10am, Institut Français du Cambodge, St 184). Later, there will also be a screening of work by artists and animators from Phare and ithinkasia, followed by a Q&A and roundtable about animation in Cambodia today (2.30pm)

Meanwhile at The Flicks, immerse yourself in the sinister world of Victorian London’s dance halls, alleyways and criminal underworld with creepy thriller The Limehouse Golem (8pm, St 95). Grant Montgomery, the production designer, also worked on Peaky Blinders – here’s a fascinating interview about how he creates his compelling period-piece worlds.

An exciting one-off theatre production comes to Phnom Penh tonight: London theatre group The Performance Exchange are currently on a huuuuge world tour, with an adaptation of Sherlock Holmes. Directed by Daniel Foley of the Royal Scottish Academy of Music and Drama, the play will be performed just once in Phnom Penh – tonight – so don’t miss out!

Feeling brave? Get up on stage yourself at Cloud’s A Nook for Rhyme Crooks, where you’re invited to perform original poetry, spoken word, songs – or whatever you’d like to share. (6pm-Midnight, Cloud, St 9)

The Kampot Playboys are back in town and our team is in full fangirl/boy mode. Can’t rate them highly enough… expect a packed-out venue, and plenty of dancing. (10pm, upstairs @ Oscar’s On the Corner, corner of St 13 & St 104.)

And on Riverside, Parallel Impulse bring their funk-rock-disco-pop sound to The Stage, supported by a covers band called, ahem, Perpendicular Disinclination (very funny, guys). Playing original songs, Parallel Impulse is made up of Joshua Chiang and Denver from Boxchords, Tim Holland from Sonic Detergent and Kuzey from Fender Benders. (8pm-Midnight @ The Stage, Sisowath Quay).

One of our favourite Phnom Penh DJs Max Mason plays at Duplex tonight, joined by Crappy Beats and Toke. Plus, there’s 75c Cambodia Beer on draft and a BBQ from 7pm until Midnight. (Duplex Belgian Taverne, St 278).

The Gin Jubilee comes to an official close this weekend with a huge brunch and BBQ at Farm to Table – with, of course, plenty of gin concoctions to try, as well as live music from St George’s Trio (1pm-5pm, Farm to Table, St 360)

Over on Riverside, Chinese House is hosting a traditional (Western) Sunday Lunch check out the menu here! (from 11am, Sisowath Quay)

Want to pick up a gorgeous made-in-Cambodia gift… or a pre-loved gem? Swing by Ripple Cafe’s pop-up shop and garage sale today. Plus, it’s also their ‘doggy friends day’, so you can bring your canine friends (or play with someone else’s!). (10am-3pm, Ripple Cafe, St 360).

Still trying to make sense of the chaos that led to a pervy, racist drunk uncle somehow becoming leader of the most powerful country in the world? META House is screening the (admittedly, hyperbolically titled) TRUMPED – INSIDE THE GREATEST POLITICAL UPSET OF ALL TIME this afternoon (4pm, Sothearos Boulevard).

Or, head to the Flicks 1 for a screening of The Ivory Trade, a film that’s looking to do for elephants what Blackfish did for orcas (4pm, St 95)

Overdone it this weekend? Unwind with a chilled yoga session, led by experienced instructor Myrto (5pm-6.30pm, Show Box, St 330. $6 for Expats, $3 for Khmers).

Want to squeeze in one last band before the weekend’s over? Energetic pop covers band Boxchords are on hand for one last dose of live music at Hops Brewery & Craft Beer Garden (7pm, St 228).

That’s all for this weekend! Don’t forget to sign up to get this roundup delivered straight to your inbox every Friday. See you on the other side!

Blade Runner 2049: A New Classic has Surfaced
Top Things to Do in Phnom Penh THIS Weekend