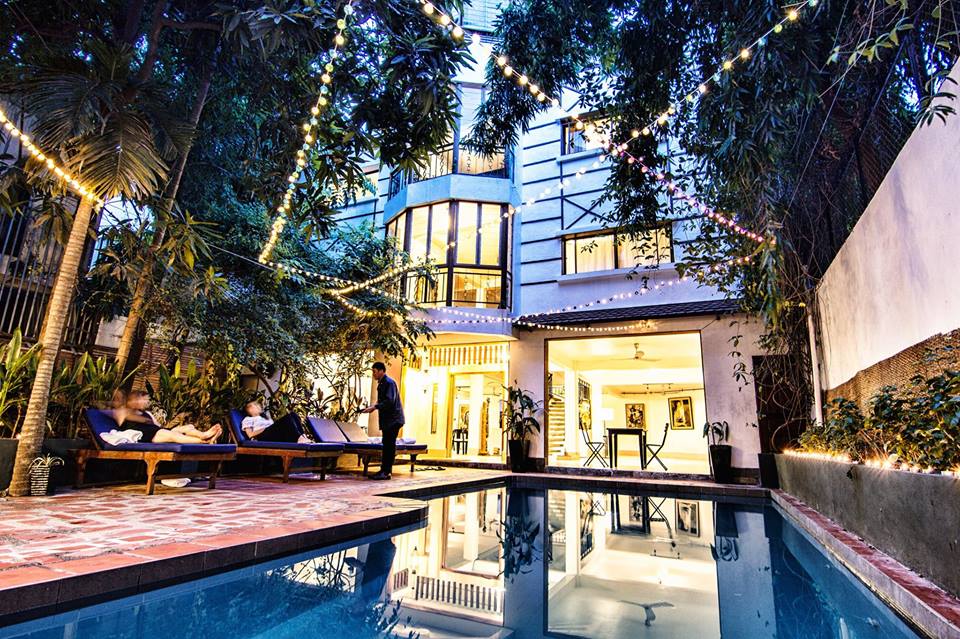 Nestled poolside within YK Art House, Bong Bonlai’s vegan offerings are re-imagined as tasting plates at only $1 per dish, every Saturday and Sunday between 11am and 2.30pm. Ten options are available and currently 5% of proceeds go towards teachers from Seametrey Children’s Village in Tonle Bati who are studying in India to become accredited Montessori teachers.

The choice is varied, with traditional Western-influenced items such as avocado on toast with black beans; fruit salad; and banana and passion fruit pancakes. Eastern options include a red Thai curry or soba noodles, and there was even some quirky twists available such as keftedes with mango sauce, broccoli soup or a “pulled mushroom” slider. We were informed that the toast was made using the Pelican Food Company’s sourdough bread, showing that time and care is taken to select the best ingredients for their recipes.

The waiter advised that dishes were small, so we opted to share six plates between two.

Whilst we’d have happily devoured the entire menu, exercising restraint led to the following selections:

Not everyone thinks that curry is breakfast food, apparently, which meant that I didn’t need to share this red Thai version… and I was all the more delighted for it. Highly recommended as it’s great value for money as perhaps the most filling of the dollar options and packed with nourishing tasty vegetables. There wasn’t much spice; it’s more hearty and smooth. Throw some chillies in it, and I’d eat it all day, every day.

That sourdough bread makes a mean toast – a great crunch complimented by the chickpeas topped with fresh herbs. Nice and simple… much like this blurb.

Google helped us on this one. Discovering that keftedes are some form of Greek meatball intrigued us, and it’s flattened vegan counterpart was presented to our table. Quite simply, it’s a combination of veggies fried in flour which was set off exquisitely by the mango sauce. The portion size was small, but next time we’ll be getting at least two or three as one is just a tease to our taste-buds. Worth a try.

Avocado on toast with black beans

Holla’ if you’re a millennial, raise your Starbucks to the sky and yell out for some avocado toast. We’re going to dub this dish as the quintessential daddy of the brunch menu, so just go ahead and order it to complete your meal. The vegan tweak obviously removes the poached egg, and instead we’re given black beans, tomatoes and herbs.

Crepes move aside – we have some deliciously fluffy pancakes on offer here. I have a passion for passion fruit, and if you’re bananas about bananas then this is a no-brainer. The combination might be the easiest East meets West fusion you could recreate, and it works wonders. Brushed with icing for your pleasure.

As a meat eater (sorry, planet), I was immediately impressed by how well mushroom compared to the usual “pulled pork” classic. The filling was incredible but the artisan slider bun was perhaps too big in comparison, leaving most mouthfuls as 85% bun and 15% filling. Still, to the credit of the bread, it was delightfully toasted on top and noticeably gourmet. Frazer Vs Burger may have to return to take on a bigger one… there’s a king mushroom Aussie burger available for $5.90 for those wanting to bite into something bigger.

In case you couldn’t tell yet, it was good. Go try it.

Every Saturday and Sunday, 11am – 2.30pm, Bong Bonlai, YK Art House, Street 830 aka the alley near Aeon Mall that is home to Samai Distillery.