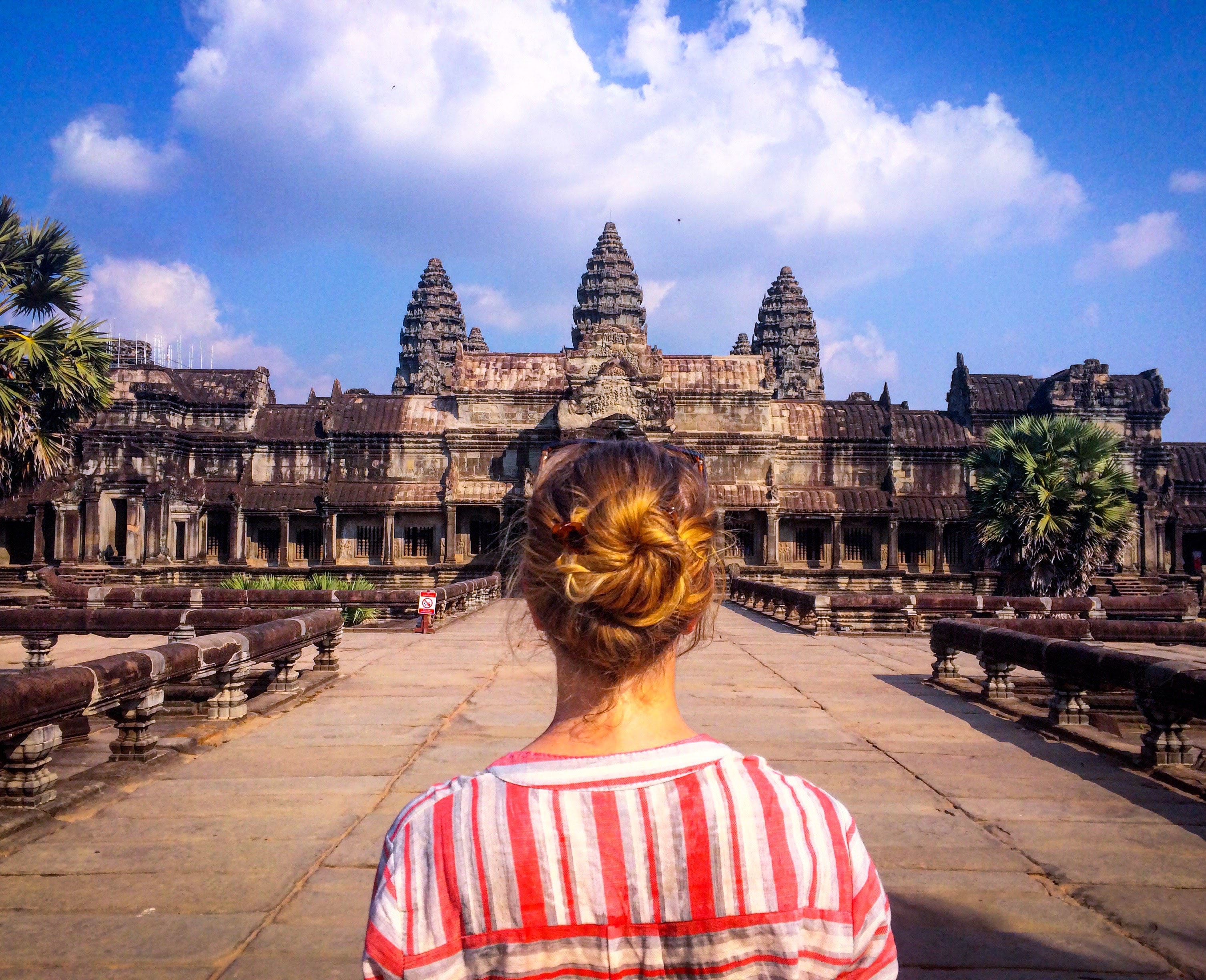 Yeah, We Love Siem Reap. Here Are 7 Reasons You Should Too.

Getting out of the tuk tuk in Siem Reap on Sunday, the driver asked the usual questions “Are you going to the temples tomorrow? Do you need a tuk tuk driver?” But when we’d confirmed that we didn’t, he then asked one I’m not used to hearing: “Could you give me a high rating on Grab?”

It’s anecdotal, but it capped off a day of feeling desperation coming from each business visited, who offered discounts, checked ingratiatingly if service was up to par and asked for good online reviews. They didn’t need to tell us that business wasn’t booming as usual. The lack of people – in the airport, on the streets (including Pub Street), at the temples – told the story well enough. The Kingdom’s UNESCO-protected gem may be the gateway to one of the wonders of the world, but visitor numbers are tumbling to Siem Reap.

Last Monday, addressing the problem of the downturn of tourists in Siem Reap, Prime Minister Hun Sen announced that hotels and guest houses would receive a four-month reprieve from taxes February through May. The reason stated for the reprieve was to relieve businesses suffering as a result of Coronavirus fears, which have indeed hurt tourism to the Angkor capital as well as the rest of the country.

“The large drop started at the beginning of February. January was buzzing with tourists and looking to stay that way through to March, the normal high season,” said Sonya Duck, owner and operator of Urban Forage food tours, which operates in Phnom Penh and Siem Reap, “however after all of the media attention around CV19 [coronavirus], people have been cancelling or postponing (hopefully the latter) their travel plans to the Kingdom…. We have seen a lot of cancellations coming though and very few new bookings.”

The epidemic looks set to become a pandemic as the numbers of cases increase across Asia, Europe and the US, slowing tourism the world over. Travel to, and even transit through, China, South Korea, Japan (all major hubs for international flights to Cambodia) could mean that travellers will end up in quarantine at their final destination. Adding to the concern, is that it is known that there are carriers of the virus who have no symptoms, and that 80% of the people who have contracted Covid-2019 only have mild symptoms – so how can you know that you’re not spreading the virus?

While it’s true that Covid-2019 has caused a precipitous drop in tourists, Siem Reap’s been facing a fairly steep decline from well before the virus’s outbreak. There had also been a 24% drop year-on-year in travellers to Siem Reap in September 2019, and there was an 8% drop year-on-year in tourists to Angkor Archeological Park in the first half of that year, which ultimately ended up being 17-18% by year end.

When announcing the drop in the number of tourists to Angkor Wat, the Minister of Tourism Thong Khon blamed “zero-dollar” tours, saying, “give tours without taking a profit, but they bring guests to places charging exorbitant prices on souvenirs, food and accommodations and then take commissions.”

Regardless of the reasons, there is no doubt that Siem Reap has been seeing a huge loss in tourists for more than a year, and the local economy is feeling it.

Which is a shame. Because we love Siem Reap.

“There is a pretty dark mood as we navigate through these times but also hopeful,” said Duck. “I believe that the people who are avoiding Cambodia now will still want to come when this all blows over.”

7 Reasons We Love Siem Reap – and We Think You Should, Too:

There are many green spaces, and trees lining the streets. And it has an obvious close-proximity to the Angkor temples, a mecca of cultural history, beautiful ancient artwork, and lots of greenery. Even in the city centre, it is an oasis of tranquility – quiet and peaceful. If you’re coming up from the capital, it’s (literally) a breath of fresh air.

Top Tip! We recommend renting electric scooters to take the long route through Angkor Park, where there is nothing but long stretches of overhanging forest; or popping in for an afternoon at one of the many boutique hotels that have incorporated verdant foliage into their poolside design. Been there, done that, seen every temple? Take an early morning walk along the waterfront and listen to the birds awaken the day.

Less well known is Siem Reap’s close proximity to Phnom Kulen National Park, known for beautiful waterfalls on top of the mountain Phnom Kulen, which make it a popular destination for day trips and picnics.

Top Tip! Dip your toes in the water for a free version of the “fish pedicures” advertised in town – the little fish will nibble off the hard skin on your heels. You can also get up close and personal with the area’s butterflies, either at the magical Banteay Srey Butterfly Centre or along the Kbal Spean carved riverbed. Around April time, thousands of butterflies congregate. here for breeding season – it’s breathtaking.

If you want to party like you’re 23 – or 53 – there are bar and dance spot options all over town. For the cliché (but let’s face it, fun) backpacker experience, Pub Street’s dozens of bars vie for your attention with blasting dance music and drink specials. Buy two buckets at The Angkor What? bar and get a free T-shirt, cross the road to the always-packed Temple Club for a rave, or head right up to the hospital end of Pub Street and continue along the alleyway for the more chilled vibes of Soul Train Reggae Bar.

Top Tip! Those who want to feel a more-mature kind of drunken should head to cocktail bar staple Miss Wongs, which has a wide selection of thoughtful and tasty creations, or the modern-meets-cavernous Picasso Bar. Both are around the corner from Pub Street, so it’s not hard to change your mind about that age-appropriate thing.

It’s a foodie town, known for many high-quality restaurants serving up Khmer flavours at all price ranges. Check out any of these rated restos for a delightful Cambodian-food dining experience: Cuisine Wat Damnak, Embassy, Heritage, The Kitchen 2002, Mahob, Mie Cafe, Pou, Trorkuon. For vegetarians and vegans, you’ll love Chamkar – it’s the ideal spot to sample Khmer classics without the meat or fish.

Top Tip! Looking to branch out from Cambodian cuisine? There are plenty of really good foreign food options, but our favourite is George’s Rhumerie, a French-Creole restaurant in an elegant garden setting, where they make their own (fabulous) rum.

Since Siem Reap is such a tourist destination, it’s also a great spot for finding day spas. And as I learned this weekend, many very nice places are currently offering high discounts.

Top Tip! Honestly, there are many great spas in Siem Reap. We can recommend Suri Spa for a high-end experience, Devatara and Frangipani spas for a lovely midrange, and for a social enterprise (to make you feel good while feeling good) check out Sugar Spa.

Siem Reap is home to the Phare Circus, a social enterprise that dazzles the eyes Cirque du Soleil-style while providing some pretty rad employment opportunities and life skills to those lucky enough to be in it.

Top Tip! Keep an eye out for new shows announced on the Phare website and plan your Siem Reap trip around what you most want to see. The group puts on a wide variety of performances, some inspired by classic Khmer folklore, some portraying modern urban life in Cambodia, some telling stories of the aftermath of war… all using circus skills and physical theatre in incredibly inventive ways.

Yes, really! Don’t worry, these aren’t running wild – the adorable fellas at the APOPO Visitor Center (and only there) are specially trained to detect landmines. Too small to set them off themselves, the rats can sniff out the bombs safely and much more quickly than humans.

Top Tip! Watch the rats demonstrate their slick moves at the visitor’s centre, where your entry fee goes towards their word of de-mining northwestern Cambodia.

Getting There: The drive from Phnom Penh to Siem Reap takes around 5-7 hours. Buses run throughout the day and night, taking around 5-7 hours. The fastest and most reputable option, Giant Ibis, costs $15 each way and offers nearly-flat beds on the night bus, so you can get a decent snooze. Otherwise, you can book a bus or minivan for as little as $5 each way through BookmeBus.

Continue Reading
You may also like...
Related Topics:Angkor Wat, Cambodia, featured, Siem Reap, What to do in Siem Reap, Why Visit Siem Reap