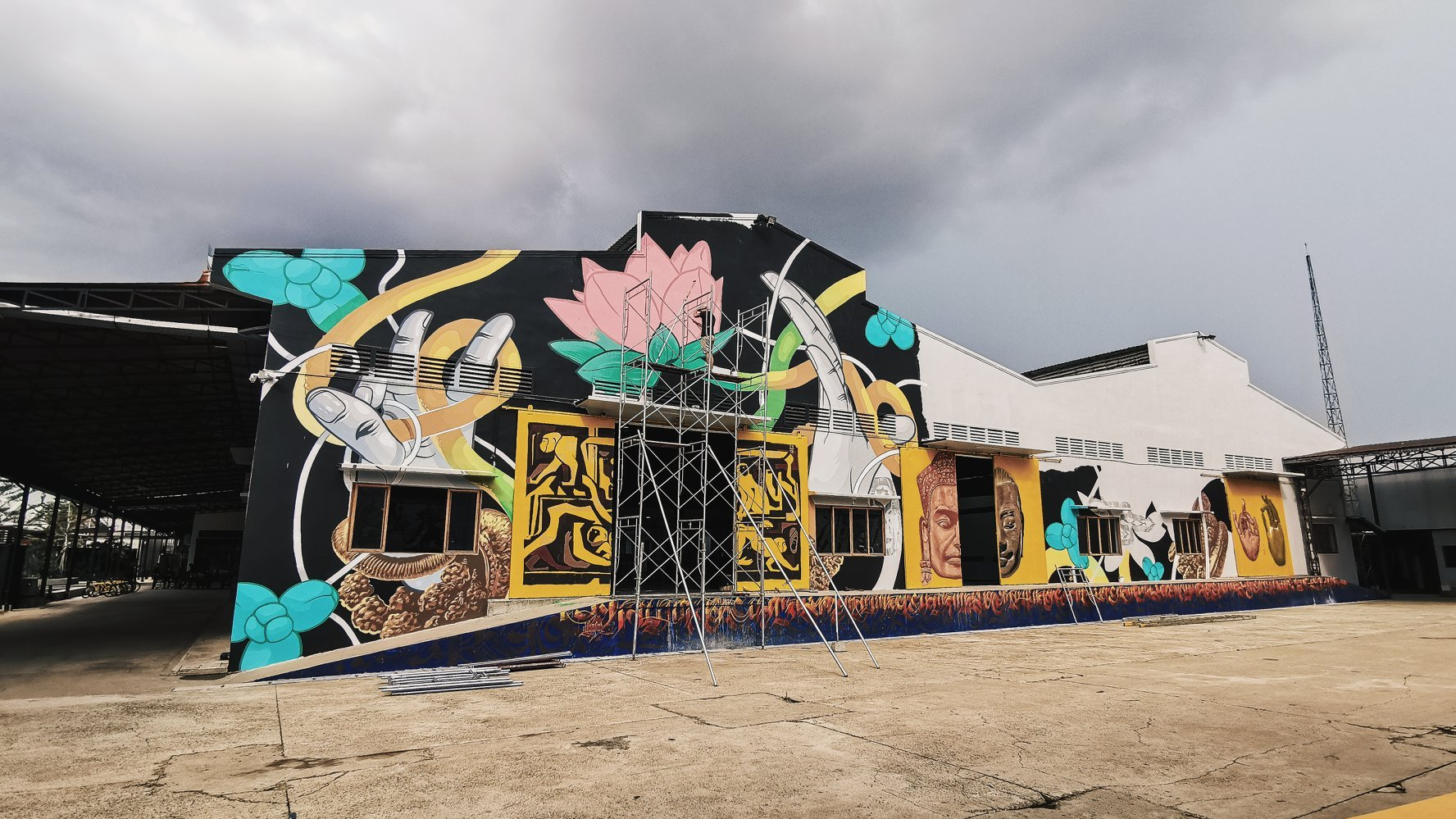 This Sunday is the long-awaited opening of the ArtSpace by KBach Arts in the Factory. It’s a mind-blowing amount of events planned – not just an opening, or even simply an art show, but a carnival for artists, art lovers, or people who are looking for something different and fun to do.

And just in case there are attendees who really insist they don’t care about the arts, there will be a bouncy castle and a fire show (not together, thankfully).

The furniture was designed by Phnom Penh-resident Alex Galan. His designs transform wire barrels into sculpture podiums, coffee tables and even frames for projectors. These will be used on the day to create giant canvases on the ceiling, so that graphic and digital designers can display their work from iPads as they’re creating it.

The team have been planning the opening and building out the space since March and the opening runs in conjunction with the launch of the 2019 KBach Arts Competition, a nationwide arts competition open to anyone. For last year’s inaugural competition, KBach gave out just over 50 canvases to mostly young Cambodian artists who then had six months to create a piece of art. Of the canvases they handed out, they had a remarkably high 97% return rate.

“The quality of the work was astounding as well,” says Tony Francis, founder of KBach Gallery.

“We had struggled with the finalists in terms of when we reduced the initial 50 down to 10.”

This year they plan to hand out over 100 canvases, as well as do a tour to cities around the country in order to hand out canvases and reach more potential contestants. They’ve also expanded the competition to three categories: canvas, sculpture and mural paintings – each with its own artist judge who will also mentor the contestants over the months. “So anyone who’s struggling with their piece or wants more help will have more of a direct involvement,” explains Shauna.

Hour Soben will also be presented with $1,000 cash prize on Sunday and you’ll have a chance to see his work in action as he creates one of the live paintings at the event.

This sense of community support and collective artwork is exemplary of what KBach is trying to do with the space in the Factory. “Essentially, not only are we creating the art space, which is the biggest art space in Cambodia at 2200 square metres. But also we’re running an AiR project, which is an Artist in Residency project,” explains Tony, adding that they also have studio spaces, market stalls for artists to sell works and workshops to develop talents. “The whole idea is we now have all of the facilities in place to actually strengthen the market.”

The opening extravaganza will showcase at least some of the art-community development that they are planning to do. In addition to block print artist Carlos Gomez’s stencil workshop, attendees are also asked to sign up beforehand by emailing info@kbacharts.com for a chance to have their portrait painted live by Art_by_Dev (don’t worry – you don’t have to sit still in a chair; they’ll have a professional photographer there to snap your photo for him to paint from).

Further chance for participation is in the interactive gallery, where Carlo Santoro’s Metaestetica Lab “provides an exhibition, where the audience is encouraged to not only comment on the work and interpret the work, but even interact with the work itself. And then it carries on a cycle where the next team would just come in and then view the work that have been interpreted by somebody else,” Tony explains.

Feeling more like a passive observer? Artist Chifumi will be putting his finishing touches on the mural decorating the gallery’s outside wall and Aaron Pollitt will dazzle with a fire performance. And of course, there’s music all day, with performances by Marie Thach, Lisha, and The Sound Initiative. Saxophonist “Gerard Evans will just be rocking around the whole time, too” adds Shauna.

“We’ve made a playground for creative people,” she adds, “and we want everyone to come play.”