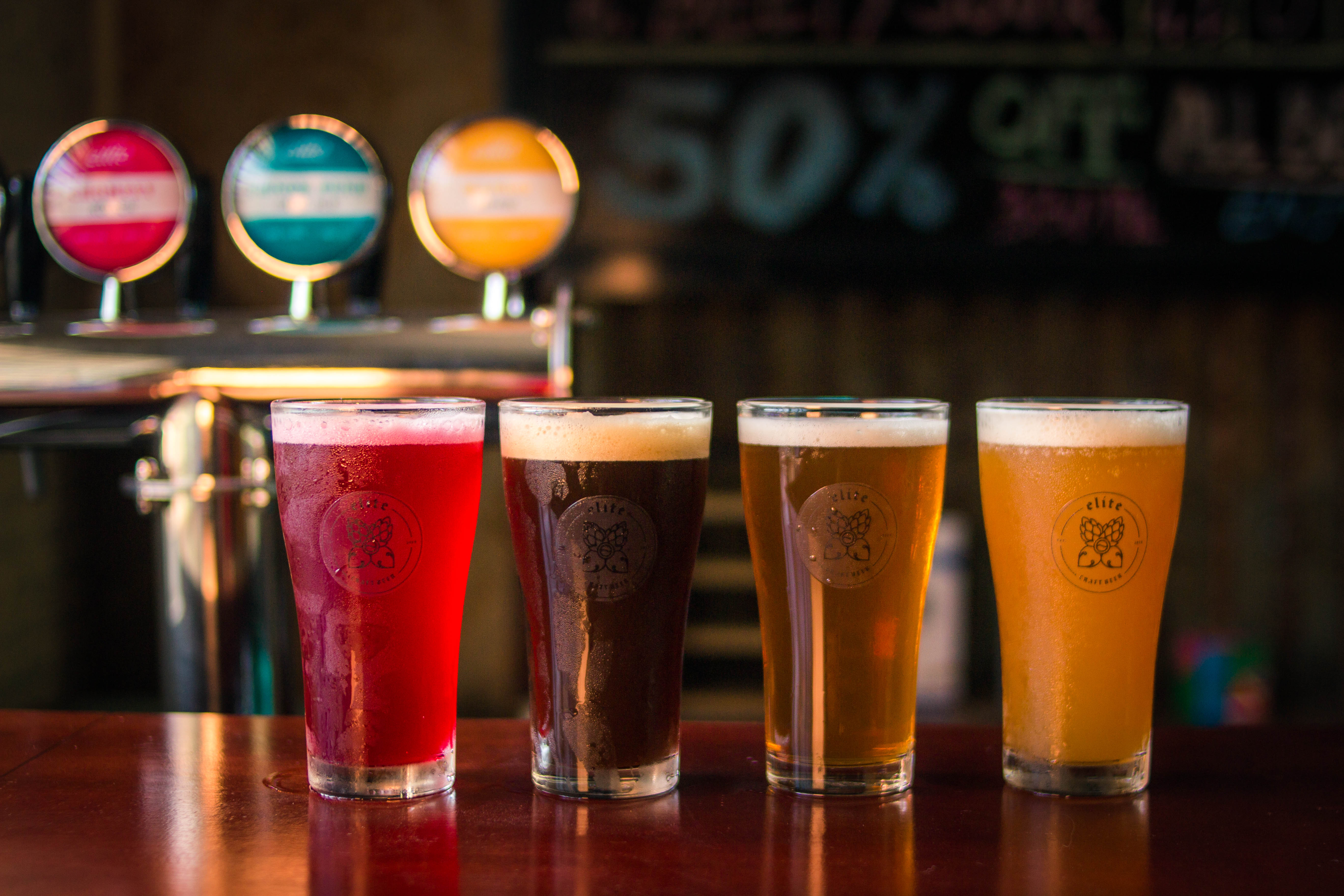 The Khmer Craft Brewery That’s For Cambodians, By Cambodians

A fateful moment brought together the two owners of the first Khmer-produced craft brewing company in Cambodia. Ung Jason had returned to Cambodia in 2018 from Australia, where he’d gotten into the home brewing scene, with the hopes of turning this hobby into a business in his home country. He’d noticed that in the very nascent craft brewing industry in the Kingdom, none of the local brewers were Cambodians – something he decided to change.

“None of the Cambodian brewers were actually brewing craft beer,” he recalled. “Only mash beer like Anchor or Cambodia and all that stuff”.

After consulting with some heads of the industry in Thailand and Vietnam, he learned how to source materials and equipment and began renovating his family’s home to accommodate his home brewing set up. In 2019, with machines arranged in the back room and a bar and dining area in the front room, Jason established Elite Beer, a small neighbourhood bar that served his homebrew on tap as well as some small plates of food.

“After I was open for a few months, he came by to have a drink,” Jason said, explaining how he came to meet his future business partner, Sophan Poeudore (Dore). “And he’s a bit strange, because he’s Khmer, and he seemed to know what he’s drinking. And then I approached him, you know, as I normally did with my customers. I asked him, ‘How do you know about craft beer?’”

He added with a laugh, “because he seemed to enjoy drinking my beer actually! And then that’s how we get to know each other”.

In fact, Dore had previously been introduced to craft beer through his work and had spent “many months” trying to find a way to import the ingredients necessary for home brewing before he met Jason. He’s never met another Cambodian who makes homebrew craft beer besides the two of them.

Seeing Dore’s passion for good craft beers, and having experienced how hard it is to run a brewery solo, Jason suggested they team up and help each other.

Once united, the pair decided to shut the bar and start seriously focusing on their brews in March 2020. “We were still brewing 20 litres at the time,” said Jason. “And now we brew 100 litres. And it’s still that we don’t even have enough to supply to our customer”.

Those 100 litres are bottled and sold to six restaurants and bars around Phnom Penh, as well as three in Kampot and one in Battambang. The pair also made a strong showing at the 2020 Oktoberfest in Phnom Penh, where they say foreign and Cambodian customers alike were happily surprised to see “two black-haired heads standing among the crowd of blonde and red heads”.

“We received a lot of good feedback that night,” recalled Jason. “A lot of good feedback, and I was happy because we were surrounded by people who were a lot more professional than us, and we saw a crowd. And it’s not because of us being unique there, but because when they came to taste our beer, they liked it. And they kept coming back”.

As of Friday 5th February, Elite Cambodian Craft Beer will also be sold in its own taproom pub again, giving even more opportunity for new customers to discover their beer and stick close to the bar.

The refurbished taproom, with exposed brick walls painted a soft off-white, offset by the green of a few potted plants and a black chalkboard displaying the beers on tap, has an inviting, cozy atmosphere.

“Just a small space where people can come in and enjoy. That’s the idea”, said Dore, humbly accepting my compliment.

The decision to reopen the taproom to the public was spurred on when they were approached by a local bicycle tour group to become a designated pit stop, welcoming cyclists who’d worked up a thirst touring the city and its breweries.

The taproom will be open on Fridays and Saturdays, as the rest of the week the pair will be making new batches. “Everything about our beer is handcrafted,” Jason explained, holding up his hands. “Nothing’s automatic like at the other microbrewery… we still do everything: cleaning by hand, bottling by hand, washing by hand. We do everything ourselves. Just the two of us.”

While financially that’s all they can afford right now, he noted that being a small company has additional benefits: “because, if we are doing only a small batch of 100 litres, if anything goes wrong, we can adjust. We can change easily”.

The taps will run their tried and true four flavours as well as four taps devoted to a consistent rotation of “experimental” brews, whose flavours change depending on what fresh local ingredients are available. Though, in fact, all of their beers incorporate Cambodian ingredients and tastes. Their most popular beer, Mango Neipa, uses Cambodian mangoes, and their kölsch is made with Khmer frangipani flowers. The pair have also released a new pink beer, just in time for Valentine’s Day, made from beetroot.

Besides creating craft beers with local flavours, Dore said their “big mission and vision” is to introduce Khmer people to good craft beers. “We’re focusing on Khmer. We want to introduce them to ‘what is craft beer’. I remember my first time trying craft beer; in my mind I said, ‘Why is that beer so delicious?’” Dore recalled, adding, “And it took me twenty years to try that kind of beer”.

They may face an uphill battle to convert Cambodians from the lagers they’ve grown accustomed to. Jason notes three hurdles: the different flavour, the high strength (of flavour and alcohol), and the greater cost. “I think the cheapest craft beer that you can get is at least $1.50 per glass or bottle. At least,” he said, noting that potential customers could get three Cambodia or Anchor for the same price.

“It’s not that I haven’t tried yet,” to introduce Cambodians to craft beer, he said, “but the fight is extremely difficult. 110% difficult”. Jason thinks that since Cambodians pass culture from generation to generation, any new product has to be known and well-recognised before it’ll be adopted by the masses. He used the example of red wine: not that long ago it was wildly expensive and only consumed by the wealthiest Cambodians, whereas now “everyone can afford red wine at $5 per bottle. So, this is the same trend that is going to happen with craft beer”.

They’ve seen an inkling that Cambodians are developing a taste for the hoppier or heavier craft-style brews, though. The most recent establishment to add Elite Beer bottles to its menu is a Cambodian-owned coffee shop (as opposed to foreign- or expat-owned), whose customers are entirely local, which wants to serve craft beers alongside its coffee drinks. “So this is the first approach to the Cambodian people for us”, said Jason. Here’s hop-ing it catches on.

Continue Reading
You may also like...
Related Topics:Craft Beer, featured

What’s On Christmas?
Your Essential Guide to the Weekend Ahead