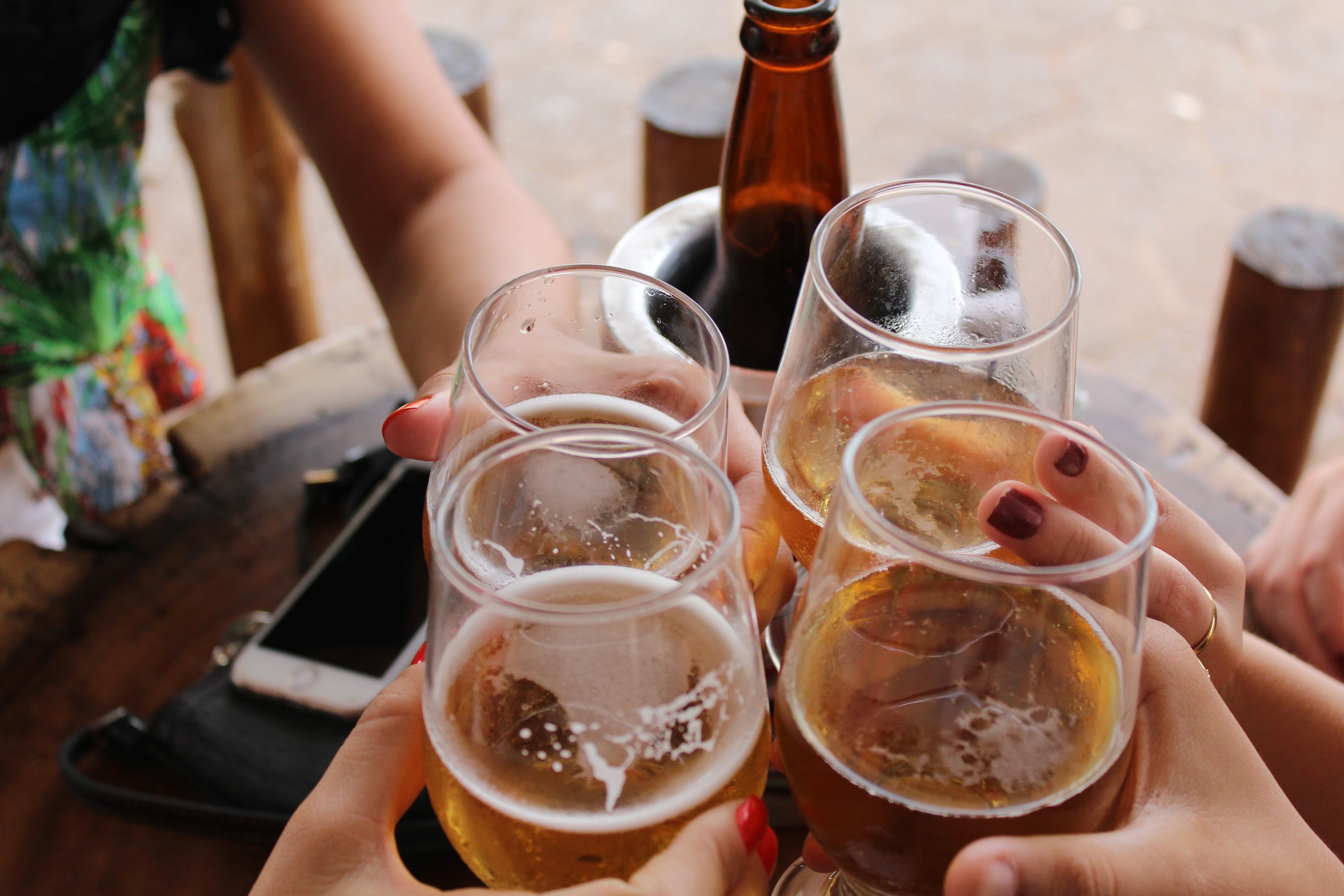 The latest edition of The Fast and The Furious franchise opens this week with Fast & Furious: Hobbs & Shaw. Fortunately, if you haven’t seen the previous eight movies, you won’t be missing any plot points important for this spin-off. In this comedic action send up, The Rock plays a lawman who teams up with an “outcast” (played by Jason Statham) to battle “a cyber-genetically enhanced villain [who] threatens the future of humanity.” No joke. Honestly, it looks like a good-for-summer flick. Let the hilarity ensue! (multiple showtimes, Major Cineplex Aeon Mall, Sothearos Blvd.)

In case you hadn’t heard, today is International Beer Day. Inaugurated in 2008, it is a day in which beer sommeliers and academics come together for some heady (pun intended) discussions on topics such as wheat crop yields and their effects on varieties, movements the industry can make to combat alcoholism and how to draw the distinction between craft beers and homebrews.

Just kidding – it’s an excuse to drink beer. Here’s what different bars around Phnom Penh are doing to celebrate:

The Box Office is having specials on its craft beers AND fish and chips all night, with music by David Bell and Kirsty Day. Proper British pints, too. (6pm, Box Office, St. 244)

And the guys at Wat Langka-area craft beer bar Embargo are trading places with the owners of Riel Brewing in Toul Tompoung, tending each other’s bars, just for funsies. (5-11.30pm, Embargo and Riel Brewing, St. 51 and St. 464, respectively)

Uncomfortably White Brothers band is playing a free show at Bassac Lane, the Tonle Bassac bar street that turns into an open-air music venue on weekends. These guys play “heavy-ass, rock-solid acoustic grooves during an eclectic set of 70’s-inspired covers from Al Green to The Bee Gees to The Doors and even Led Zep”, meaning don’t let the name scare you away; with these classic jams you’re going to feel very comfortable.

Cambodian artist Srun Rida will be giving a talk at Sa Sa Art Projects, in Khmer with English translation. Rida has a degree from Royal University of Fine Arts and currently has a prints and painting exhibition at Sa Sa titled “Influence”, which looks at objects to question how Phnom Penh’s development is impacting Cambodian daily life. (6pm, Sa Sa Art Projects, St. 350)

For the month of August, Cambodian photographer Kim Hak will be showing his exhibition “Alive” at Bophana Center. It documents the personal stories of members of twelve Cambodian families who survived the Khmer Rouge and resettled to New Zealand. Interestingly, his subject matter is also individual objects. (8am-6pm, Bophana Center, St. 200)

Cubik is back at Reggae Rooftop, bringing house, techno, and drum and bass to those who need the underground beats to move their feet. Tonight’s lineup features Cambodian DJ Kenny Chase of HypeLab as well as Lefty Stryker, DJ Marcus iLL and DJ Sequence. Free before 11pm; $5 after. Time to glitter up! (10pm, One Love Reggae Rooftop Bar, St. 172)

Today is a huge day for fashion in the city. It’s currently Phnom Penh Designers Week, and in concordance with that there will be two runway shows and multiple pop-up shops.

Okay, first the official PPDW events: Rosewood is hosting both the menswear and womenswear fall/winter 2019 runway shows, at 12pm and 6pm, respectively. Unfortunately, these events are by invitation only, BUT you can still come to the Rosewood for the designers’ pop-up shop, which is running throughout the day. This is your opportunity to see the clothes that you didn’t see on the catwalk as well as to meet the designers. So really, same same but better. (11am-10pm, Rosewood 36th Floor, Vattanac Tower)

Futures Factory is holding its first weekend market today, in addition to their usual food and drinks market. Stalls will have pre-loved and new goods from sellers from all over – with a priority given to Cambodian vendors – so this event is promising an eclectic mix of fun things to buy. (10am-6pm, Futures Factory, St. 13)

Hip Phnom Penh jeweler Penh Lenh is having a 50% off summer sale. The sale starts on Friday, but the free ice cream bar is on Saturday. 🙂 (10am, Penh Lenh, St. 456)

Dorsu clothing company from Kampot, known for comfy fabrics and ethical production, is back in the capital for a pop-up shop at Lot 369’s BKK location. (2-5pm, Lot 369, St. 282)

The image of grilling meat and lifting weights goes so perfectly together you can almost hear the grunts. So the fact that the local kettlebell gym is hosting a BBQ seems pretty damn perfect. Load up on Texas-style beef brisket or pork ribs (and the fixins: roasted corn, potato salad and green beans) at Kettlebell Cafe after swinging a, likely, exhausting amount of weight around for an hour at Crossfit Amatak. (10am, Kettlebell Cafe, St. 470)

If you’re feeling a little softer than rock hard abs…like, fuzzy wuzzy soft…then perhaps you should take your brunch at the Ministry of Cat: Rescue Cat Cafe and Adoption Center. Enjoy a vegan or vegetarian meal while playing with adorable kitties in a sunlit cafe. (10am, Ministry of Cat, St. 442)

It’s a good night for live music, too!

Panorama Sky Pub is also hosting Cambodian stars, with hit pop group Small World Small Band playing the Pub’s Jack Connection party. This is a long one – from 6pm to 2am – so expect to see more than just the stars on the stage and in the night sky. (6pm, Panorama Sky Pub, St. 178)

Or transport yourself away from the Kingdom of Wonder to the Pearl of the Antilles with salsa music at Cloud. Latin Music Special is back with the smooth jazz and pop sounds of duo Carlos Camacho and Marina Xavier. Bring your dancing shoes, order a Cuba Libre and feel the rhythm of the night. (8.30pm, Cloud, St. 9)

It’s as if everybody assumed Phnom Penh would be hungover today – of the (relatively) few planned activities going on, most seem to involve being chill or day drinking.

If the above does describe you, then today is the perfect day to check out the new movie at Flicks – Poms. The ladies of a retirement community form a cheerleading squad and enter a competition against other teams – aged 18+ – in this feel-good comedy, starring Diane Keaton. We know who you’re going to root for. (12pm, The Flicks, St. 95)

“Dog and Owner Chill Morning” says it all. Hosted by Good Dog at Phnom Penh Dog Training, everyone (even non-dog owners) are welcome to come hangout and drink coffee and tea while the dogs swim in the pool, run on the lawn and play on the playground. Seriously, even if you don’t own a dog, what could be cuter than watching doggies on the swingset? (9am to noonish, Phnom Penh Dog Training, St. 20)

If your little one is of the human variety, take him or her to Kids Fun Art workshop at Meta House. Part of the Creative Kids Club, this afternoon is meant for children to explore creating without rules or the concept of mistakes – but with guidance to develop their painting and drawing skills, imagination and ingenuity. We need one of these for adults, too. (2-5pm, Meta House 3.0, St. 178)

For your beautiful dose of random, there’s Cambodia’s first Koi Show and Matsue Kohaku Growout Contest. With judges from Japan, Malaysia, the Philippines and Cambodia, this is going to be a big event for koi owners…and just really meditative and pleasant for viewers. (9am-4pm, Grande Koi Farm, National Road 6A)

And finally, The Exchange is hosting the instinctual salve for a hungover Sunday: “Lazy Afternoon Sunday Beats”, with DJ Shagzy and buy one get one Cambodia beers. Hair of the dog, everyone. (1pm, The Exchange, St. 47)

That’s all for this week, folks! For complete listings week-in, week-out, take a peek at our daily events calendar here.

Continue Reading
You may also like...
Related Topics:Things to do in Phnom Penh, Weekend Roundup