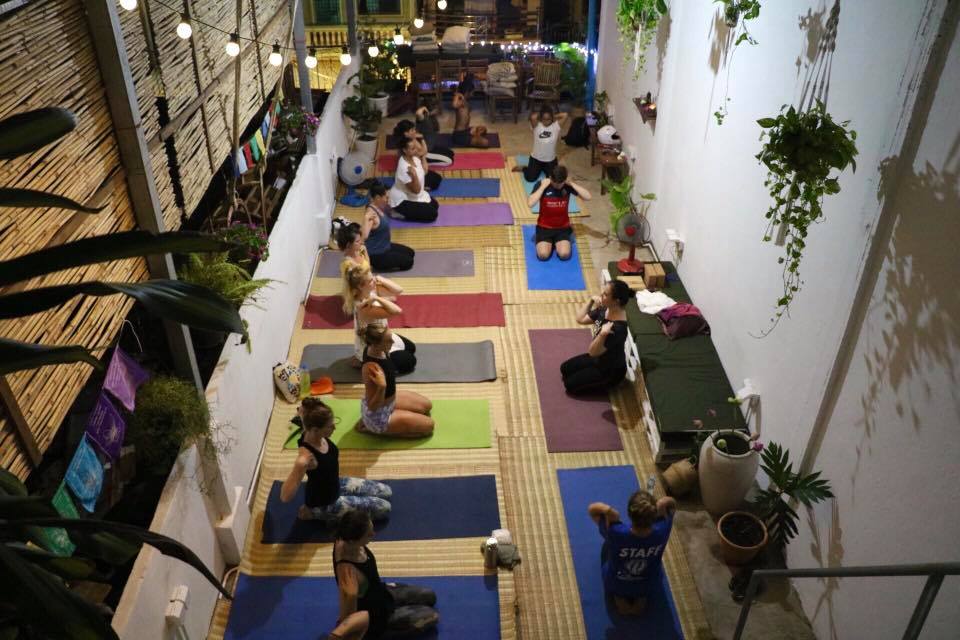 On a recent Wednesday evening, a yoga guru reminded a full class that “Yoga is not a competition”. Having never tried yoga before, and fully aware touching my toes with straight legs is simply not an option, I thought to myself, “Yeah, right. Bring it on. I’m gonna yoga so hard!”

A newcomer to the Toul Tompoung scene, Sacred Lotus has a vegan café/restaurant on the ground floor with a “homestay” on the middle floor. The rooms available are reasonably priced at roughly $13-15 a night, including complimentary breakfast. However, their yoga class takes place in their rooftop space.

The long, narrow rooftop is usually decked out with comfortable seating but on this occasion the furniture was fully removed so that as many yoga mats as physically possible could take over. Sure enough the class was filled, perhaps due to the impressive accolades of the teacher. Rebecca had been practising yoga for over 20 years and spent seven years as a Buddhist nun. To complement the class, there was even a free 30-minute guided meditation afterwards.

How did it go?

As the class was open to all abilities, including complete beginners like myself, I decided to give it a go. After a short introduction, we were asked if we had any injuries. “Not yet”, I retorted to a mild giggle from the class giving me enough self-validation not to interrupt any further. Rebecca demonstrated a routine that she mentioned would in itself be an adequate hour-long yoga routine. This lulled me into a false sense of security as I copied the various well-known positions: downward-facing dog, warrior one, upside-down paralytic daffodil*, etc.

*That last one might not be the right name, but y’know, I did say I was a newbie.

Shortly after the ten-minute intro, we were guided through a longer routine lasting around 50 minutes, with varying pose adaptions available. After feeling sore in the “kneeling” position, I realised that bending was perhaps something I’d need to practise gradually, but my OVERWHELMING COMPETITIVENESS meant instead of doing yoga for the beneficial relaxation qualities, I would be pushing my body into twists completely alien to me. At one point – as my crooked, outstretched leg wobbled loftily above my head, with me arse over elbow – I saw another participant in the corner taking the instructions and tripling the difficulty with great ease. As I crashed down to the mat, I mentally tipped my hat to the teacher for being able to provide instructions for the clumsiest newcomers yet also appease the most dreadlock-sporting, centred, skilled and graceful participants. I was even given some chunky blocks to balance on whilst the rest of the class did shoulder stands effortlessly.

The Sacred Lotus class appealed to multiple ability levels. Competing with the chaotic background noise of Phnom Penh, Rebecca regularly guided us with her smooth tones to encourage us to feel the beneficial mental and physical release of yoga. Despite ending up at the very front of the class, I didn’t feel too awkward as there were regular intervals for her to help adjust a pose without disturbing the rest of the class as they capably enjoyed her direction. At a mere $4, or $2.5 for Cambodians, it was a terrific experience.

No one said it, but I’m sure it was on everyone’s mind that I was absolutely fantastic. Maybe not at bending, or moving, or like, yoga – but I’m sure I won. I never did find out how the scoring system for yoga works…

Rooftop yoga takes place every Wednesday from 7pm until 8pm. Currently it is scheduled until the November 6 on the Facebook event page. $5 for foreigners; $2.50 for Cambodians (free for the first class). Register and prepay to reserve your place for the class due to limited spaces. Message Sacred Lotus via Facebook for payment details. (If you’re at the cafe, you can pay via Wing or ABA.)

Continue Reading
You may also like...
Related Topics:Vegan, yoga