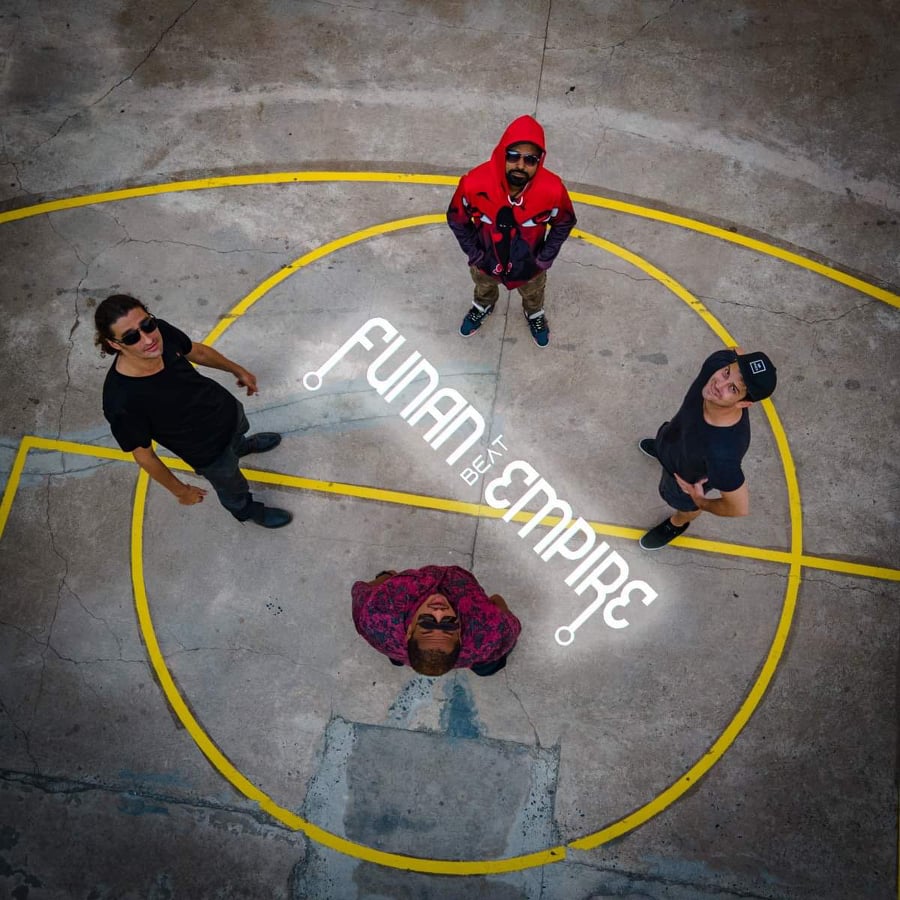 “We’re calling our sound dark industrial hip hop,” says Initial G of Funan Beat Empire. Due to the Covid-19 shutdown, I’m meeting with the band over a group call, rather than face-to-face. But in a way, it seems fitting. The lyrics and themes of their debut album resonate strongly with a pandemic-struck world.

“Thematically they [Pierre and Adrien] made it very clear from the beginning that they wanted to address issues like environmental de-habilitation, economics and political overtones. The underlying message is that we are already living in a dystopia. We’re just not calling it that yet,” says Initial G.

The band brings together Adrien Gayraud (Moi Tiet & The Schkoots), Pierre Lenormand (a music production specialist and sound engineer), and Mike Dynamo and Initial G (the infamous duo behind Hypnotic Fist Technique). In Retrofuturism, this trippy collective of sci-fi obsessed, socially conscious hip hop lovers have created one of Phnom Penh’s most original and addictive sounds.

It’s a sound that draws inspiration from so many unexpected sources, too. Electronic hip hop is mixed with traditional Asian instruments like the roneat (a type of xylophone), tro (a stringed instrument) and khong (a circular gong). This, combined with the foreboding lyrics, is where Funan really pops. Gayraud explains that the guiding principle behind the band’s sound was to create music in this format and also in a ‘very, very dark way.’

Listening to the album evokes a sense of being trapped in a Mad Max-esque, decaying metropolis that is quickly losing its functions – something the band says is deliberate.

“This rampant futurism. This feeling that the walls are closing in, living in this city,” says Mike Dynamo. “That feeling that no matter where you are, you’re always in it.”

“We’re having to work around Covid lockdowns and this is kind of what we invoke with the fucking album,” says Initial G.

“What Covid has shown us, and this is a concept coming straight out the minds of Pierre and Adrien, is that in an absence of functioning technology, nature will take the city back to what it was originally. Which is kind of what the cover of the album dictates.”

G feels that the theme is best encapsulated by the album’s first track, Megacity. Here, the deep traditional hip hop sound is peppered with electronic, 90s-video-game-type sounds. If you’re a fan of the old school, high energy vibe of Hypnotic Fist Technique, you’ll probably be a fan of this, too – but the experimental beat mixes things up, too, transporting you to a sci-fi inspired realm.

Another especially strong track is Candyman. The song sits somewhere in the ether between Jurassic Five and Sage Francis, with lyrics that deliver clear environmental theme. It’s just a great listen.

But while the band pulls it off, making experimental music like this is always a risk, especially in a small city like Phnom Penh.

“I was the most sceptical at first,” admits G, as his bandmates laugh in agreement. “How are we going to play this at a fucking party?”

But after a few small shows and a trip down to Kampot, the boys say they started to see the potential of Funan Beat Empire in the way people were responding to the live gigs. The high energy and outlandish dancing could have been the booze, they say, but the formula seemed to repeat itself over and over again.

It helps that the band are obsessed with recreating the same slick polished production values in each live performance. At the same time, they’ve managed to bring the high energy feel of their live performances to each track – so if you’ve only ever seen them live, you won’t be disappointed in the album.

“There is something timeless about being able to create music that exists beyond you,” says Dynamo.  No matter where you are, no matter what you’re doing, you can just call up that song and recreate that feeling and recreate where your mind was at the time.”

Retrofuturism has been in the production process for well over a year and it shows. It’s original. It’s addictive. It’s fucking weird. Buy it.

Curfew Ruined Your KNY Holiday Plans? Here’s What to Do Instead
Do Try This At Home: The Lotus Table Cooks Up a Seven Course Feast