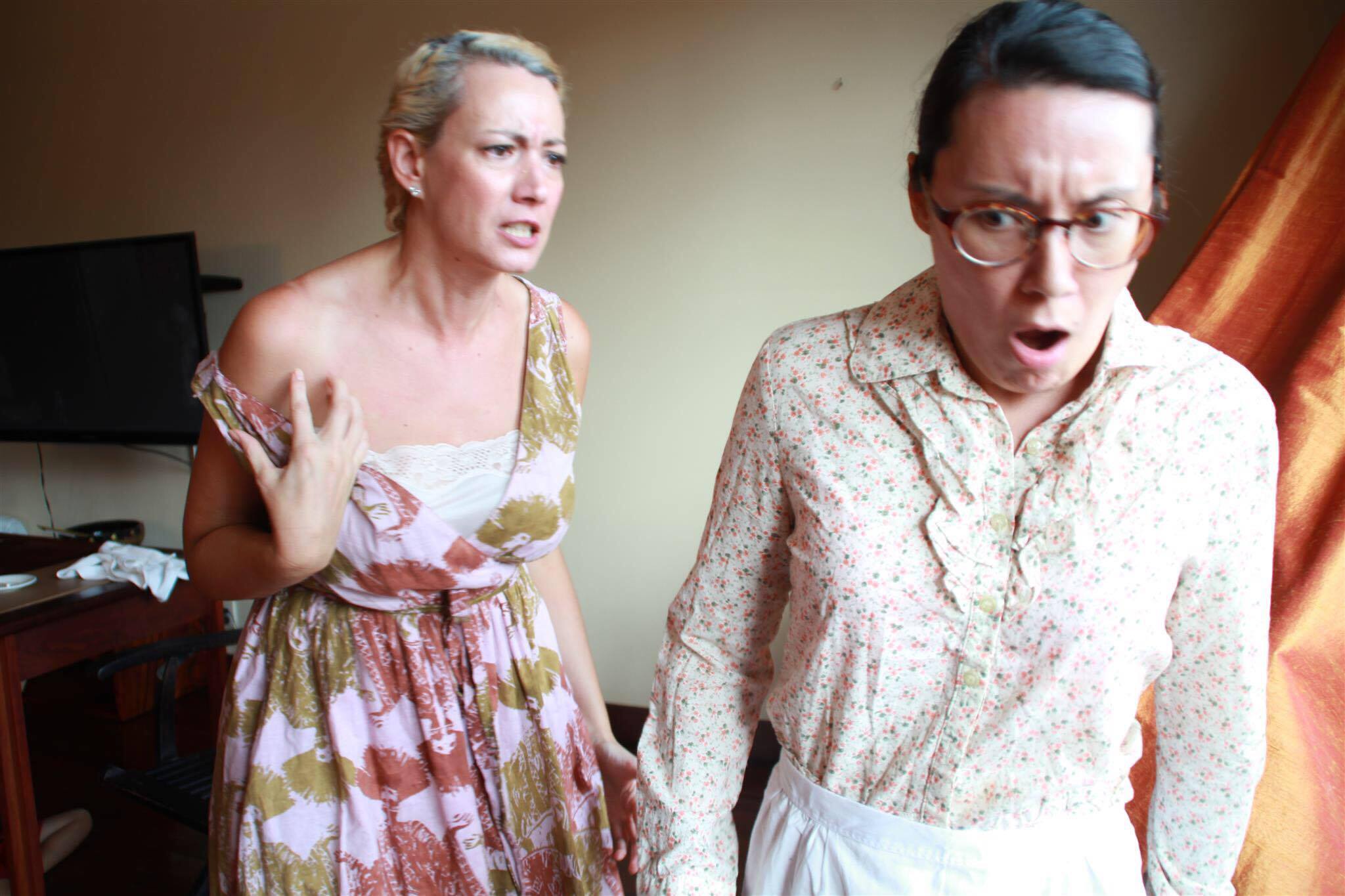 Absurdist theatre is coming to Phnom Penh, with a series of four short plays exploring the darker side of human nature – and what pushes us to violence.

Life, Love and Other Illnesses weaves through four short plays, beginning with the heightened reality of Theresa Rebeck’s Katy and Frank, charting our attempts to rationalise violence, cruelty and self-interest through Edward Albee’s Zoo Story and Eugène Ionesco’s La Leçon, and unravelling into pure metaphor and symbolism by the time it reaches Harry Kondoleon’s Andrea Rescued.

Directed by Jess Scalzo and Julia Leyris, the show is an ambitious collaboration between the Phnom Penh Players and La Troupe de Théâtre Francophone de Phnom Penh. Scalzo directs the three English-language plays, while Leyris has taken charge of the French-language play – English subtitles are projected for the benefit of non-French speakers.

It’s a brave move: absurdist theatre is not as easily accessible to the audience as plot-driven realism; directors and actors must work much harder create an emotional hook and persuade an audience to suspend their disbelief. But Scalzo says that she’s been gifted with a great cast and production team to help her bring her vision to life:

“I’ve seen these productions before and they’ve been beautiful and amazing… but you have to be so careful with them, because they’re so bizarre that the acting has to be really on point. The cast I have are fantastic and they’ve brought a lot of their own personality to it, and acted it in ways I hadn’t seen before, and I thought, oh that’s brilliant!”

“They are separate plays, but they’re all bizarre in a way, and they all touch on this lack of communication,” explains Scalzo. “So it’s about when communication breaks down between people, what happens then. It’s exploring all these different facets of human behaviour.”

The darker underside of human motivations drives the plays, she says. “All the plays end where there’s some kind of violence. I love exploring that. I’m curious about that part of the human character – what leads us up to that?”

Ionesco’s play is a darkly comic drama depicting a nightmarish lesson, given by a self-important professor to (ostensibly) prepare a young girl for her “total doctorate” exam. Instead, it rapidly exposes his base impulses and motivations, becoming a sinister power struggle as the training progresses through geography, arithmetic, linguistics and philology.

As her vision of the play, Leyris explains:

“Language is like a mined ground which, under its appearances of convention and communication, becomes the abstract weapon of a slavery. If the lesson teaches us nothing, it is more essential: it is awakening us.

“As director I wanted to invite the actors to find their own madness and to let them express it through their characters who are very attaching, crazy, and intriguing, resulting in awakening consciousness. The audience is placed into a childhood nightmare with shadows questioning the difference between dreams and reality, as well as showing the hidden face of human being.”

How Do I Get a Ticket?

There are only three showings of the play: Thursday 5th, Friday 6th and Saturday 7th October, at Phnom Penh International Institute of the Arts (PPIIA) in BKK1. Tickets cost $10 and are available from the venue, KWest, Chez Flo and Lot 369.

Oh, and if you’re going to the show on Friday, hold on to your FREE BEER voucher to redeem at Tusk on Street 278. The guesthouse and bar is throwing a massive afterparty for performers, audience members, friends and supporters (although all are welcome) on Friday 6th October.