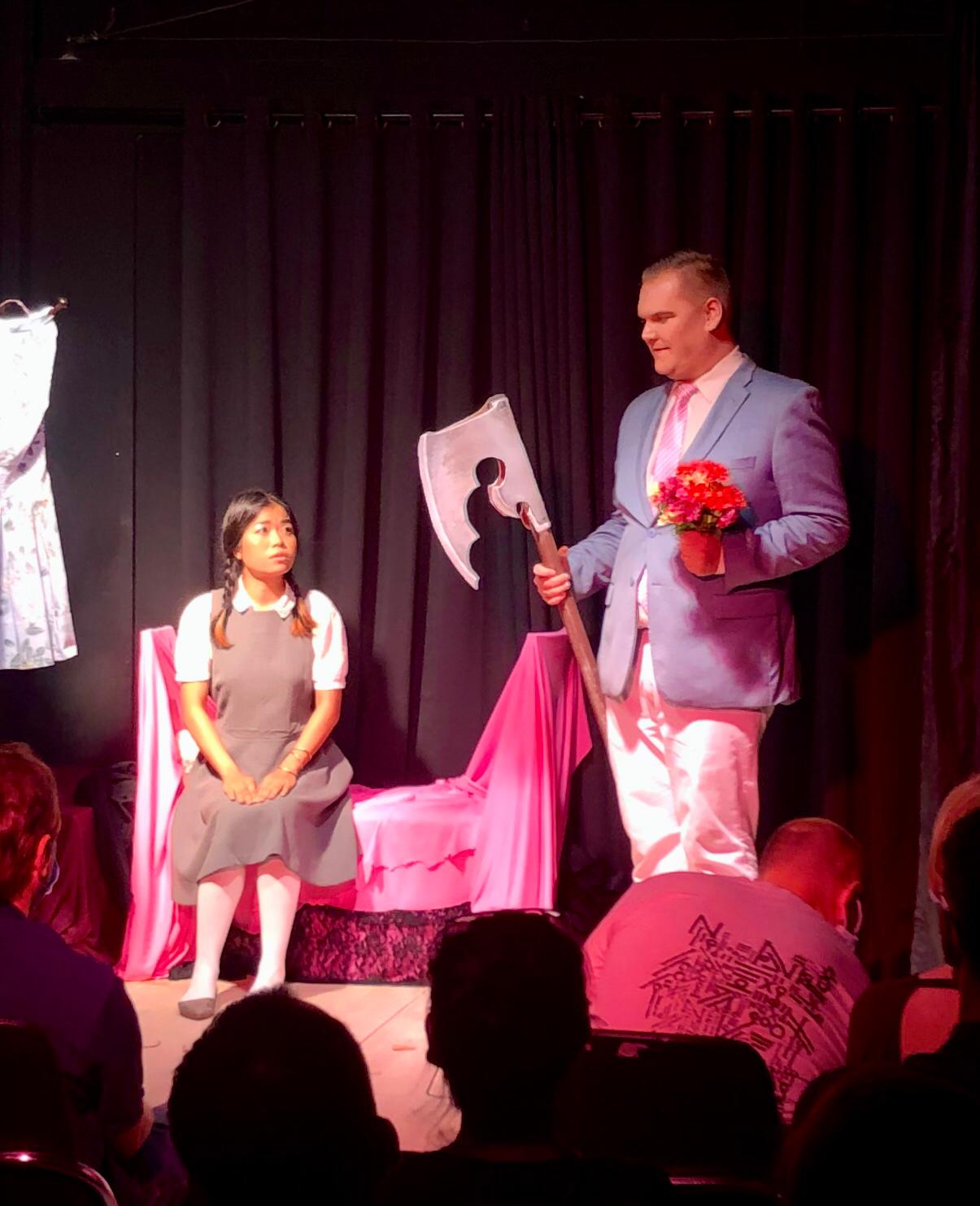 After a false start and an entire year of pandemic-caused uncertainty, the Phnom Penh Players were finally able to return to the stage last weekend with its production of The Nether. The show was so successful (it sold out in minutes) that the producers decided to add an extra matinee to the lineup this coming weekend.

Director Michael Carens-Nedelsky met up with What’s On Phnom Penh after this week’s final dress rehearsal to share what the team had to overcome to eventually make it to the stage and what it’s like to work in Phnom Penh’s newest theatre.

WOPP: So, you guys had a fabulous opening weekend!

MCN: We did, yes. It’s been really exciting because of course we’ve been working on this now for – I’ve been working on it for over a year – much of the cast for almost a year. We were originally scheduled to go on in May, and then we’re shut down because of COVID. Maybe it was even April; I can’t now remember, it’s been so long. But we had finally gotten our venue, we were just about to start rehearsing on a stage and then everything closed down. We tried to think about if there was a way to do it virtually, and it just didn’t work out. And so we had to basically reboot; we lost some cast members and had to recast. And it’s been a harrowing journey in various ways, even in this iteration, but we had our opening weekend last weekend, it was sold out completely. So it’s been great. There’s been just this amazing response. It’s really rewarding.

WOPP: How did you choose the organisation that this production is donating to?

MCN: The Players are this long-term volunteer theatre organisation, running over 20 years, for whom all the contributions go towards charity, and we’re excited about the charity that we’re supporting, which is Children In Families. It’s a really great charity that focuses on making sure children don’t end up in orphanages because of economic reasons, not because they’ve lost their parents, but really keeping families together, providing them with the support, providing counselling if families have been separated and are reunited. We decided on Children In Families, which, like many other organisations, has been hard hit by COVID, because even though the play is a sci-fi cop procedural drama about what it’s like to live online, I think its ultimate message is about the importance of human connection. And so we’re really happy to have a charity that has that at its heart.

WOPP: I think The Players supported them from the performances of Cinderella last year, too, right?

MCN: Yes, it’s really great to be able to return to a charity partner and continue supporting them, especially in a time where many, just like people, NGOs have been hit with cash flow issues. And that’s something also that we’ve done for this performance is that we’ve reduced ticket prices by 50%; it’s only $5 a ticket this time with the understanding that people have been hit hard financially. We’ve reduced sponsorship costs for people to be involved in sponsorship, and we’ve been really appreciative of the sponsors that we have, which are Angkor Research, which is a long-term Players sponsor, The Box Office, which is the space we’re performing in, and Bong Bonlai and Teddy Bar, which have helped in a variety of different ways as well. We’ve also passed around a hat for people who feel they have more they can contribute.

WOPP: Where is the stage set up in The Box Office?

MCN: This is what’s really exciting – we’re the inaugural production, basically, of almost anything that’s happened there. Paul [Glew, the owner] has taken over the adjoining building, and has connected the two, so he’s built this brand new gorgeous theatre. It’s a really lovely, small, intimate black box theatre-feeling and holds, like, 34 people –that is what we’re doing. And that’s really great because many of the spaces that the Players have performed in the past unfortunately are no longer there.

WOPP: Are you able to take precautions against COVID?

MCN: They haven’t closed restaurants and bars, and we took a variety of safety precautions. All audience members were wearing masks, we were having hand sanitiser and we were doing contact tracing.

WOPP: And since it’s a bar-restaurant, is this a kind of dinner-theatre experience? Or is it more of you go during intermission to The Box Office and get food, drink?

MCN: Yes, exactly. It’s not a dinner-theatre experience in terms of being able to eat and watch. It’s quite small, quite intimate. We figured out that you can order food to be ready for you to eat at the intermission. So yeah, then you exit the theatre side into The Box Office as it exists normally.

WOPP: What is The Nether, and how did you end up choosing this play?

MCN: It’s a play by an American playwright named Jennifer Haley. It was first professionally produced in 2013. She won a major playwriting award for this play, and it’s now being produced professionally all over the world. We can’t even lay claim to be the Southeast Asian premiere.

I fell into the Players four days after I arrived in Phnom Penh. I went to an audition, and it rekindled my love of theatre that had been basically semi-dormant since high school. And so I just started reading a lot of scripts, and seeking out scripts that I thought would be really interesting and engaging but also accessible.

WOPP: How large is the cast?

MCN: It’s a very small cast. It’s five people. Every actor plays only one role, but there’s a fascinating doubling-mirroring element that happens within the play. To explain a little more would actually spoil it. But yeah, so it’s a very small intimate five person cast, and all the actors are fantastic, and we’re really lucky we’ve got a number of very-seasoned regulars in the Players and we also have people who it’s their very first time on stage.

WOPP: Does the play have a big stage setup?

MCN: No no, but the stage itself is really tiny. In fact, it doesn’t lend itself to conventional staging because there’s no wings. It requires unconventional set and staging, but that’s another thing that we really like about it is, you know, half the play takes place in an interrogation room. And so it’s really just the audience right up front there. These two people on chairs and a very small table, bracketed by these black curtains that actually create the nice feel of it looking like a television – like an old-fashioned square television, not in widescreen – which is great because there’s already from the beginning, you feel like you’re watching Law and Order before it transforms into something much stranger and more disturbing.

WOPP: That sounds amazing. Okay, so are you going to add any more dates? I mean, considering that this weekend is now basically sold out.

MCN: No, we can’t actually. We tried looking into it. We are talking about the possibility of a reboot in 2021. I think that will rely on how COVID is going and a variety of other factors. But we’ve already even been approached by other larger venues that have expressed interest. So, that can be put out as a tease that we may return.

WOPP: Aww, man! Well, what should we tell readers who didn’t have a chance to buy tickets?

MCN: They still have a chance! Even though we sold out advance tickets for our additional matinee in less than 24 hours, we do sell a limited number of tickets at the door, for $7. So people are encouraged to arrive early to grab those tickets. Also, if people haven’t arrived by the 7:30pm show time, we sell those vacant seats. People can arrive early and put their name on a list to snatch them up if there are no-shows.

Moreover, I would say, even if they can’t see the play, they can continue to look at other Phnom Penh Player events. We’re really excited that, in 2021, we think there’s going to be a large slate of events – after we were the only production this year. But we think that now things have improved, and this sort of inspired people. So our pitch meeting is coming up, and there will be an opportunity for people who may never have been involved with the Phnom Penh Players to get involved, so we’re really excited about that.

The interview was edited for length.

The Nether, Friday, November 20 at 7:30pm and Saturday, November 21 at 2 and 7:30pm, $7 at the door. The Phnom Penh Players is also welcoming newcomers to its Pitch Party on Tuesday, November 24 at 7pm to learn more about the upcoming season and how to become a member. All events will take place at The Box Office.

Java: Looking Back at 20 Years on the Cutting Edge of the City’s Art Scene
Riding the Yekowave: The Kingdom’s First Sustainable Sportswear Brand